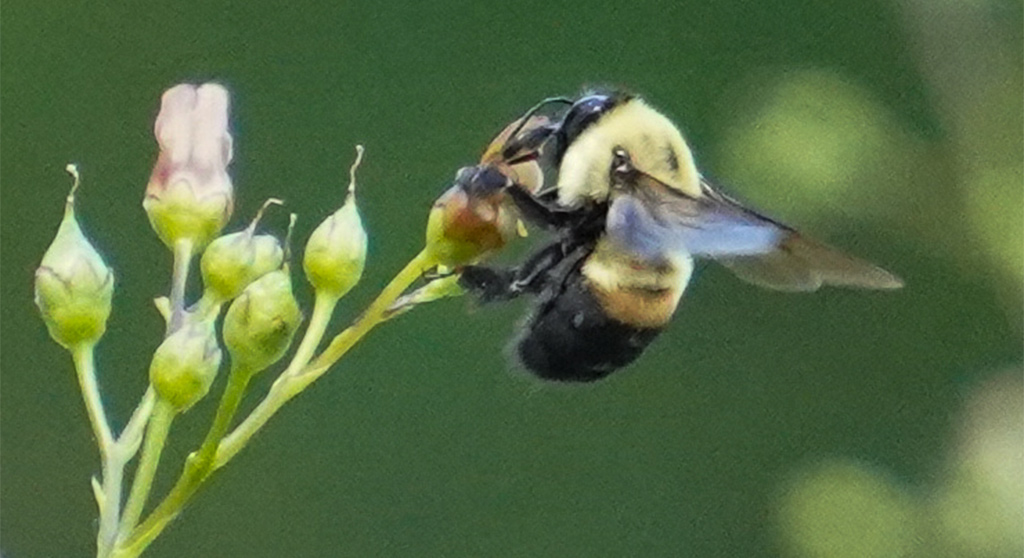 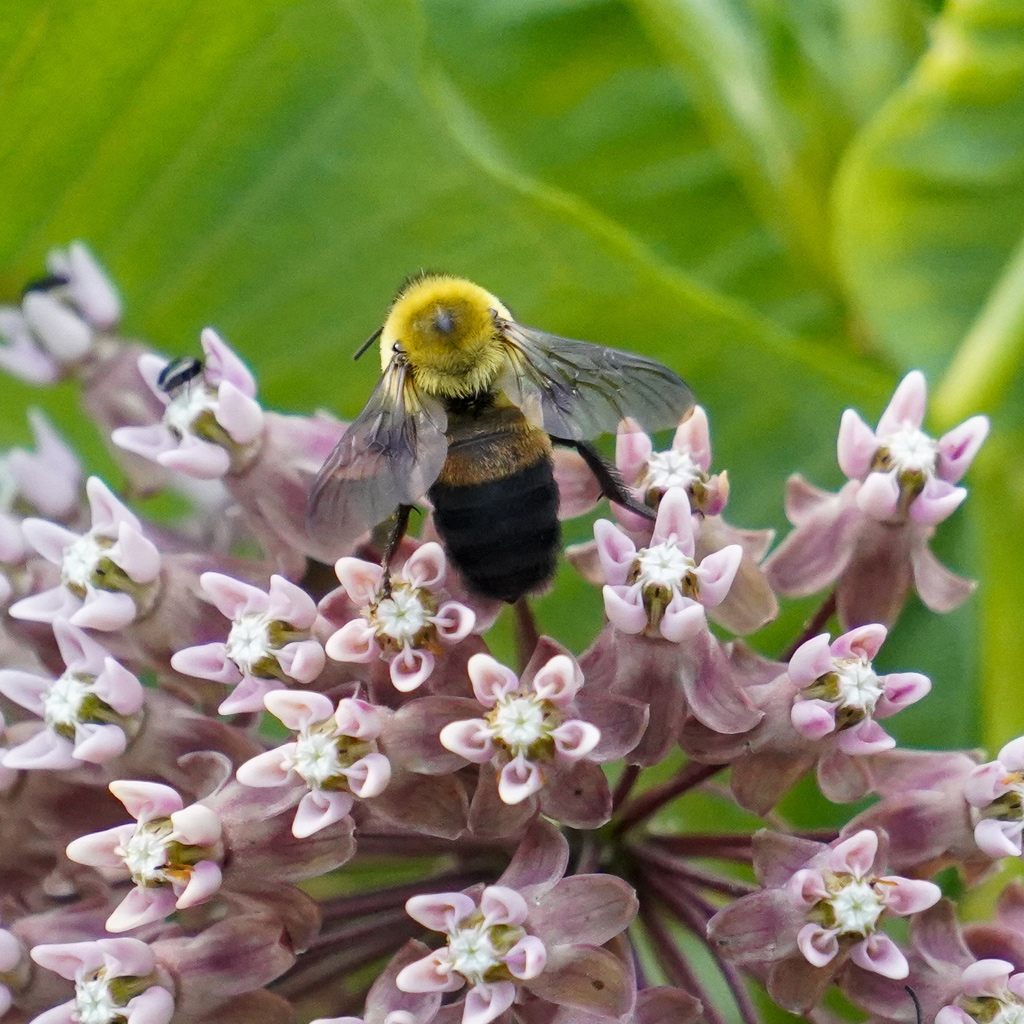 You can see a band of brown hair on the abdomen of a brown-belted bumblebee. (Photo: Jeanine Farley)

The brown belts have arrived! The brown belts have arrived! Each summer in early July, the brown belts arrive in my community garden. They seem to arrive en masse, and they take over the garden for the rest of the summer. Who are the brown belts? I am referring to a common type of bumblebee known as the brown-belted bumblebee (Bombus griseocollis). Why these bees like community gardens so much, I do not know, but I suspect it has to do with the variety of flowering plants. Unlike honeybees, which store large quantities of nectar and pollen, bumblebees store only enough nectar and pollen to last a few days. Therefore, bumblebees depend on access to a succession of flowering plants.

So what is buzz pollination (also called sonication), and how does it work? To collect the hidden pollen from a tomato, for example, a bumblebee holds onto the flower and vibrates its flight muscles. The vibrations shake the negatively charged pollen grains out of the anthers. The pollen grains are electrostatically attracted to the bee’s positively charged hairs. The bumblebee then combs its hairs, depositing the collected pollen into pollen baskets on its back legs. The bee does not remove every pollen grain, however, so some pollen is transferred to the stigma (the female reproductive organ) of other flowers as the bee makes its rounds from flower to flower. Once the stigma receives a grain of pollen, the grain travels through the floral tube to reach an unfertilized seed, which will then develop into a fruit.

You can tell when a bumblebee is buzz pollinating a flower because you can hear a buzzing sound higher in pitch than the buzzing the bees make when they fly. 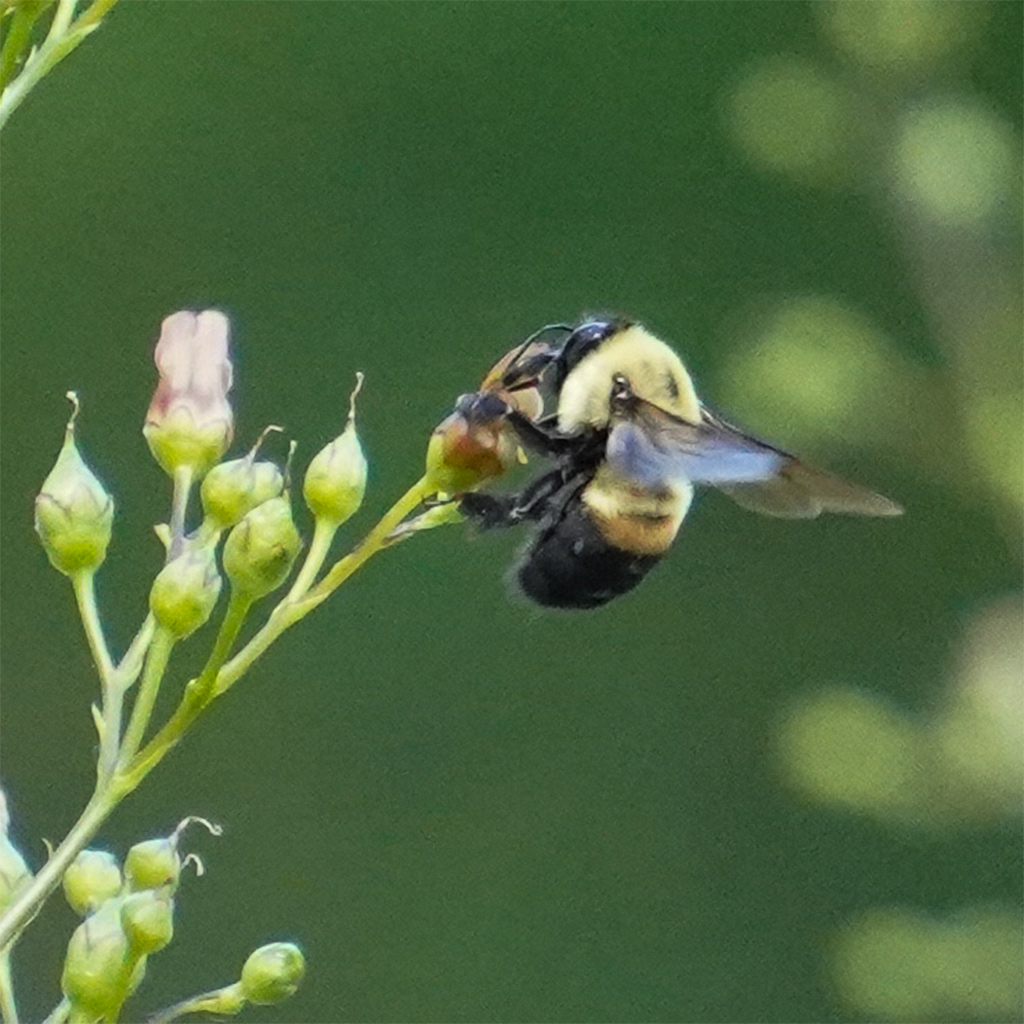 Brown-belted bumblebees are native to much of the United States but are especially common in the East. (Photo: Jeanine Farley)

Sometimes people with small porch or balcony gardens imitate bumblebees by using an electric toothbrush to buzz pollinate their potted tomatoes. This technique apparently works extremely well, and the number of tomatoes produced per plant increases significantly. There are many videos on YouTube showing how to perform this pollination technique.

Brown-belted bumblebees are native to much of the United States, but are especially common in the east.  Queens emerge in the spring, and the number of worker bees peaks in July. Many bumblebees are solitary bees, but brown belts are social. They form small colonies (50 bees or fewer), and work together to distribute tasks and rear their young. Unlike the males of other social bee species, brown-belted males help to rear the young. If you see a particularly large brown-belted bumblebee, it is likely a new queen, which has to build up a large fat reserve to overwinter and start a new colony in the spring.

Adults feed largely on nectar (made of sugars) for energy, but they feed their larvae mostly pollen protein for growth. Bumblebees use sonication for other purposes, too, such as to compact soil in their underground burrows or to move obstacles in their nest.

To see buzz pollination in slow motion, check out this incredible Smithsonian link.