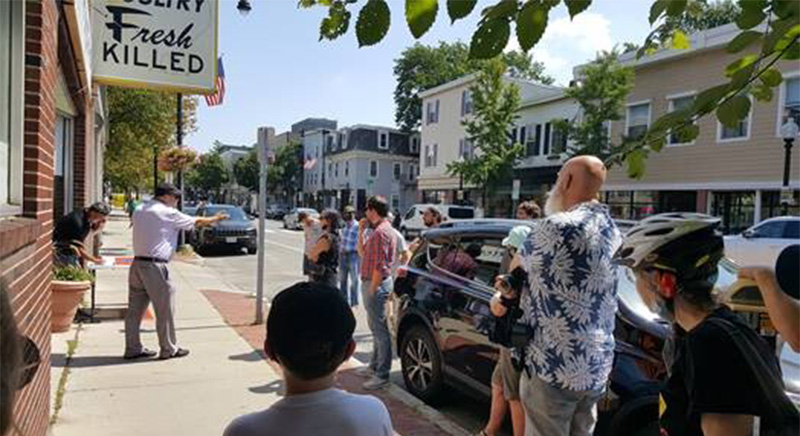 The iconic Mayflower Poultry sign (“Live Poultry Fresh Killed”) will live on in physical form and as a trademark with the East Cambridge Business Association, which bid $14,500 and $8,000 respectively at a 1 p.m. Thursday auction in front of the business at 621 Cambridge St. “Such a great symbol of Cambridge Street and the small-business community. We don’t want to see it hidden away,” the association said via social media.

“There were out-of-state bidders, Internet bidders and a bidder on the phone. Thanks go out to the ECBA for keeping this piece of East Cambridge heritage In East Cambridge,” the East Cambridge Planning Team said Thursday in reporting the sale.

After 89 years, the business’s final day in East Cambridge is Friday. But worker Doug Hall said he doubted Mayflower would be open all day, as it needs to prepare its reopening Monday at its new wholesale location at 139 Newmarket Square, Boston. A relocation was necessary after a $5 million sale of its building.

Mayflower Poultry will give 10 percent of the auction proceeds to the Cambridge nonprofit Food For Free, it was announced.

Glenna Wyman contributed to this report.