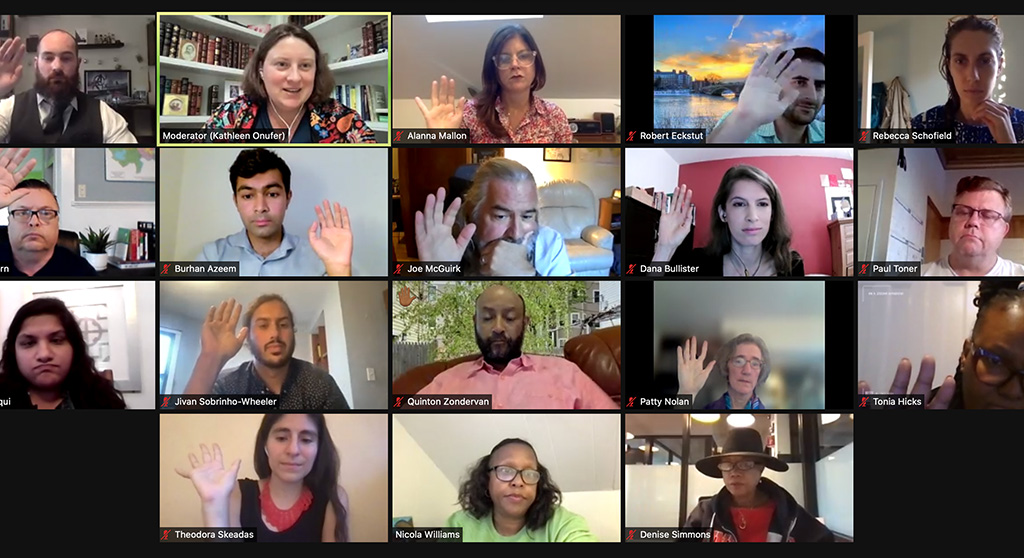 A virtual candidates forum held Sept. 19 by A Better Cambridge was followed by an in-person after-party.

The buzz Sunday was that a candidate for City Council had been campaigning with Covid but without warning the people she met. The Covid diagnosis was real, but the lack of warning was not: Theodora Skeadas said she alerted everyone she knew to as soon as she had her diagnosis.

Fortunately, all who have been tested since and reported back have said they did not catch their own cases of Covid, Skeadas said.

Skeadas was tested Tuesday and isolated at her home through Friday, she said. Medical guidelines from the Centers for Disease Control and Prevention and others say to isolate for the “10 days since symptoms first appeared,” and Skeadas said she had symptoms starting Sept. 13 – a stuffy nose and sore throat.

“I didn’t know I had Covid,” Skeadas said, and a doctor “called me asymptomatic.”

Because Skeadas is vaccinated, her Covid is known as a “breakthrough” case, which tend to be mild.

The timeline suggests that events she attended in person, such as an after-party for a Zoomed candidates forum held Sept. 19 by A Better Cambridge or an in-person meet-the-candidates gathering Saturday at Rafferty Park, were either before she was diagnosed or when she was safe to be out of isolation by CDC guidelines. “My doctor told me to quarantine for 10 days from when I started having symptoms,” Skeadas said.

Without knowing the timeline, several people contacted Cambridge Day on Sunday with concerns. “The only requirement for the job [of city councillor] is good judgment,” said Doug Brown, one of the organizers of the Saturday event held by the Fresh Pond Residents Alliance and Highlands-Quad Neighborhood Association. Knowing the timeline meant people who were at Rafferty Park could breathe more easily, he said.