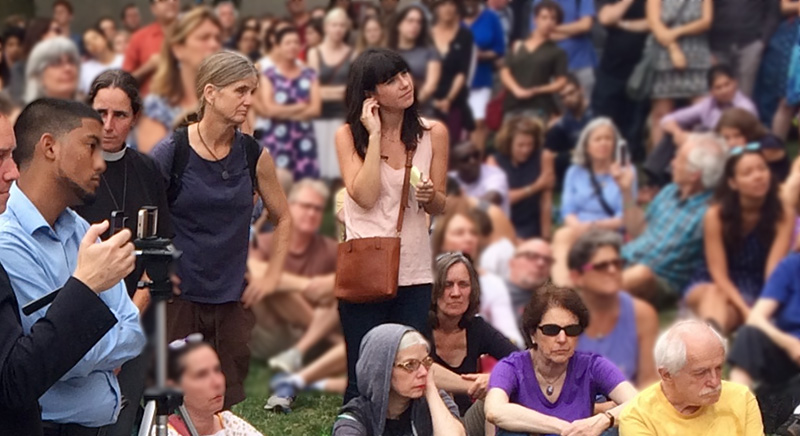 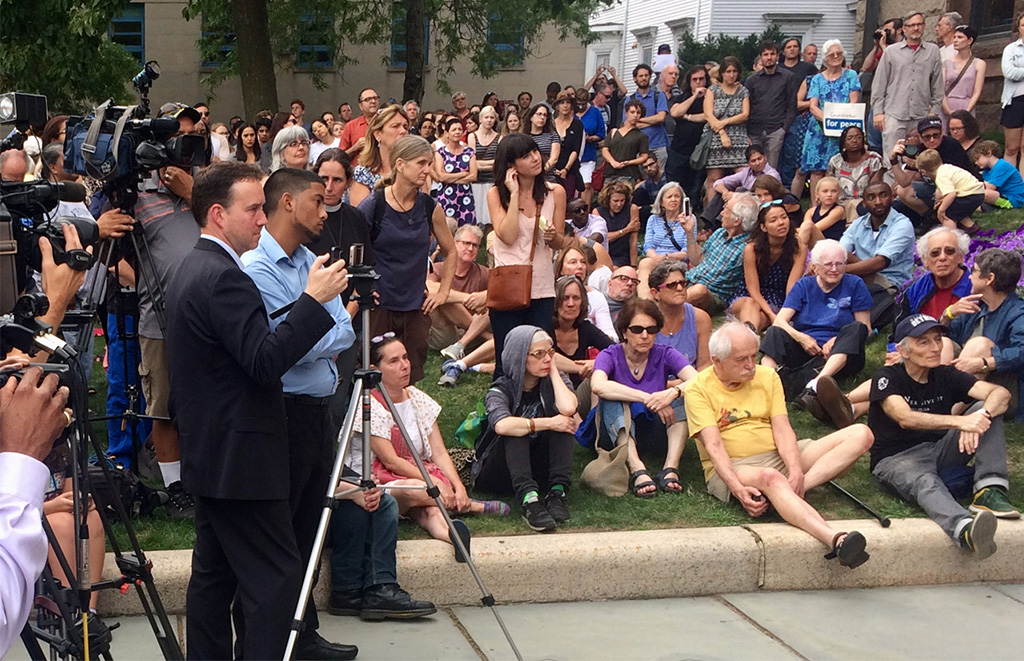 Amy Saltzman, editor of the Cambridge Chronicle, covers a rally at City Hall in August 2017. She is at center, with a brown bag. (Photo: Marc Levy)

City councillors paid tribute Monday to Amy Saltzman, as of Friday the ex-editor of the Cambridge Chronicle, and expressed sorrow that corporate ownership of the paper had hollowed out its staff over the years.

Saltzman had been at the Chronicle for nearly a decade – since November 2012 – as the paper went from one corporate owner to another, seeing its staff shrink from the levels it saw under Dole family ownership until 1990. Chronicle offices moved to Somerville and then Lexington, by which time Saltzman was the paper’s only full-time employee.

She had special talent for covering politics and police issues. In August 2020, she became an adjunct professor of journalism at Boston University, teaching courses such as “Reporting in Depth.”

Dan Kennedy, a media critic and professor at Northeastern University’s School of Journalism, said on Tuesday that longevity such as Saltzman’s was a rare thing. “It’s always sad to hear about a reporter leaving who really knows the community. We don’t see that much anymore, especially at papers owned by corporate chains,” he said.

“I thank Amy for all of her incredibly hard work,” councillor Marc McGovern said Monday, after the late resolution in her honor was read. “It goes to the larger issue of how corporate ownership of the paper and many local papers has really decimated local media. It’s something we may want to think about trying to work on in the future – Cambridge is the fourth-largest city in the state, we’re the economic driver of the community and and we have a weekly newspaper with one staff member. It’s absolutely unacceptable, and does a disservice to the people of our city.”

Vice mayor Alanna Mallon, a cosponsor with Mayor Sumbul Siddiqui of the resolution by councillor Patty Nolan, said Saltzman “was often one of the only people putting that paper together with her own blood, sweat and tears. And I really want to commend her for the work that she’s done – with the staff that she hasn’t had.”

Neither Nolan nor Mallon knew Saltzman’s next step, they said Tuesday.

An automated email response from Saltzman’s email account at the Chronicle said that her last day at the paper was Friday; it referred questions to Melissa Russell, a managing editor of owner Gannett New England, rather than to a new editor. Neither Russell nor Kathleen Cordeiro, the chain’s editorial director of weekly publications, responded to explain how the paper would run in Saltzman’s absence. Adam Sennott, a longtime freelancer, continues to write articles on City Council issues.

In a 2008 accounting of the local media landscape in CommonWealth magazine, Kennedy outlined how a few small groups of local weekly newspapers were assembled into the Community Newspaper Co. by Fidelity Capital in the 1980s and 1990s. The company “began cutting jobs and expenses almost right from the beginning” in search of profits, Kennedy wrote. The cuts continued as Fidelity sold CNC to the owner of the Boston Herald in 2001 for an estimated $150 million; five years later, the Herald “turned around and sold CNC to the company that would become GateHouse for a reported $225 million.” In November 2019, GateHouse merged with Gannett in a $1.1 billion deal that created the country’s largest newspaper company, but demanded layoffs to ensure cuts of $300 million in annual costs.