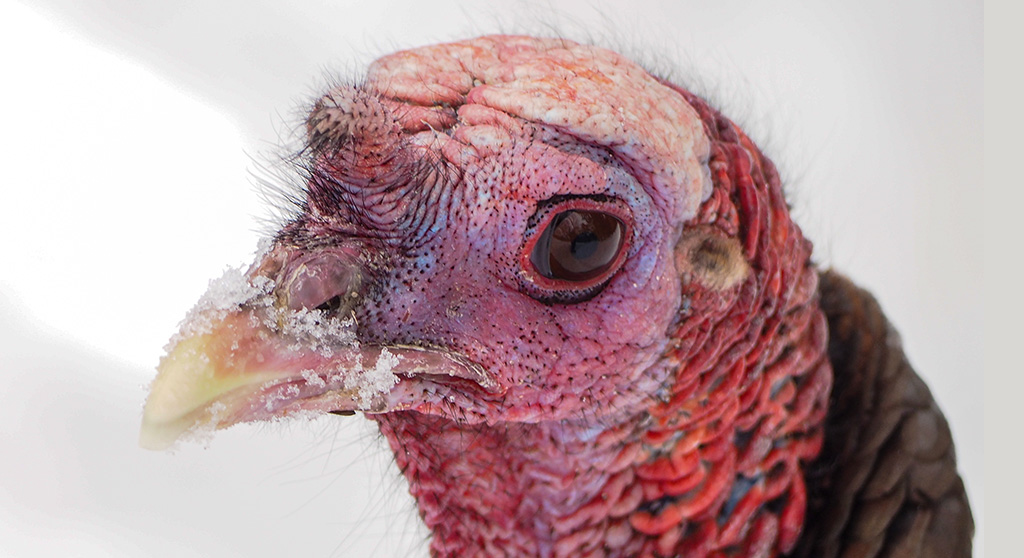 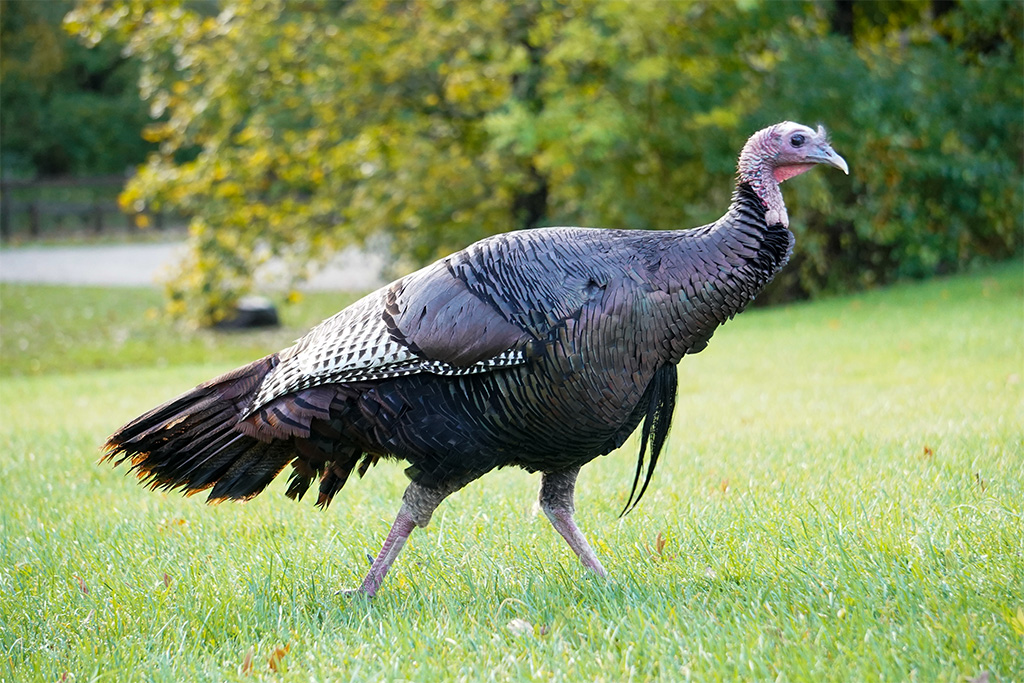 A wild turkey struts through the grass in search of acorns, nuts and seeds. (Photo: Jeanine Farley)

When early European colonists settled in Massachusetts, wild turkeys were abundant. It is estimated that about 11 million turkeys roamed North America at the time. In a letter describing the fall of 1621, William Bradford, the governor of the Plymouth colony, wrote: “And besids water foule, ther was great store of wild Turkies, of which they tooke many.” European settlers soon took too many, though, hunting this bird to near extinction. Some early hunters shot as many as 100 birds in a day to sell at market. Hens could bring 6 cents each; 12-pound males sold for 25 cents. The last known wild turkey in Massachusetts was killed in 1851.

In the early 1910s, Edward H. Forbush, Massachusetts’ state ornithologist and founder of the Massachusetts Audubon Society, wrote about how turkeys had nearly vanished from the earth and their grim future outlook:

We can form little idea today of the former almost incredible abundance of these noble birds. Our forefathers were accustomed to hunt them for the Thanksgiving dinner, and they rarely failed to secure a good supply. The bird is now extinct through the greater part of its former range. It was hunted, trapped and shot at all seasons, and is likely to vanish from the earth unless it can be propagated under partial domestication and restored to its former habitat.

Luckily for us, turkeys were restored to their former habitat. In 1972, Massachusetts wildlife biologists captured 37 New York turkeys and released them in the Berkshires. These birds thrived, and by 1978 the turkey population had increased to about 1,000. Biologists relocated some of these Berkshire turkeys throughout the state regularly until 1996. Today, there are as many as 35,000 turkeys in Massachusetts and 7.8 million in the United States, Canada, and Mexico; about 90 percent of these birds are in the United States. 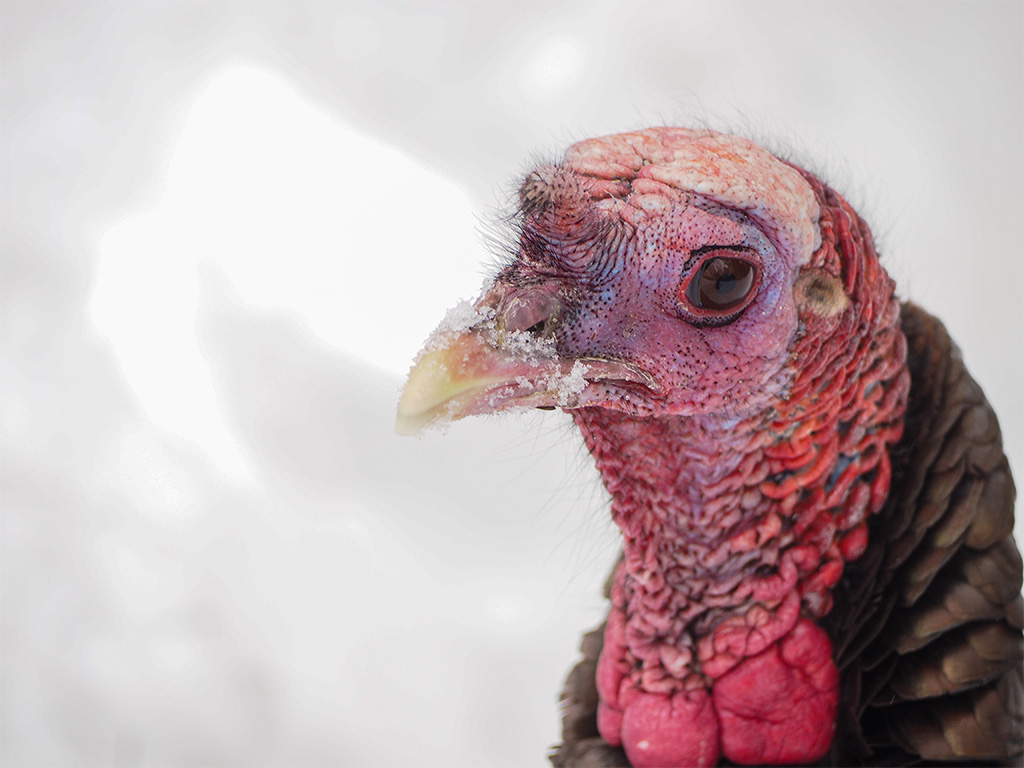 Most people like turkeys. In one survey by New Hampshire Fish and Game, 97 percent of respondents either “liked” or “strongly liked” turkeys. Only one person out of 497 “strongly disliked” them. But when people like turkeys they tend to feed them, and the birds lose their fear of people. Turkeys are naturally aggressive toward each other, trying to dominate and assert their position in the hierarchy, or pecking order, and turkeys who do not fear people want to dominate them too. Once turkeys become emboldened, it is difficult to change their behavior. You can make loud noises, swat them with a broom, spray them with water or show them a leashed dog to discourage their advances, but turkeys who persist in aggressive behavior may have to be destroyed.

In Somerville, one well-liked turkey named Fred had a song written about him. Another Somerville turkey frequented a doughnut shop, where people reportedly fed it. This bird was so popular that it even had his own Instagram page. But over time it became so habituated to people and so aggressive that it had to be put down. The lesson is pretty clear: No matter how well-intentioned you are, do not feed a wild turkey; the outcome will not be good for the bird. 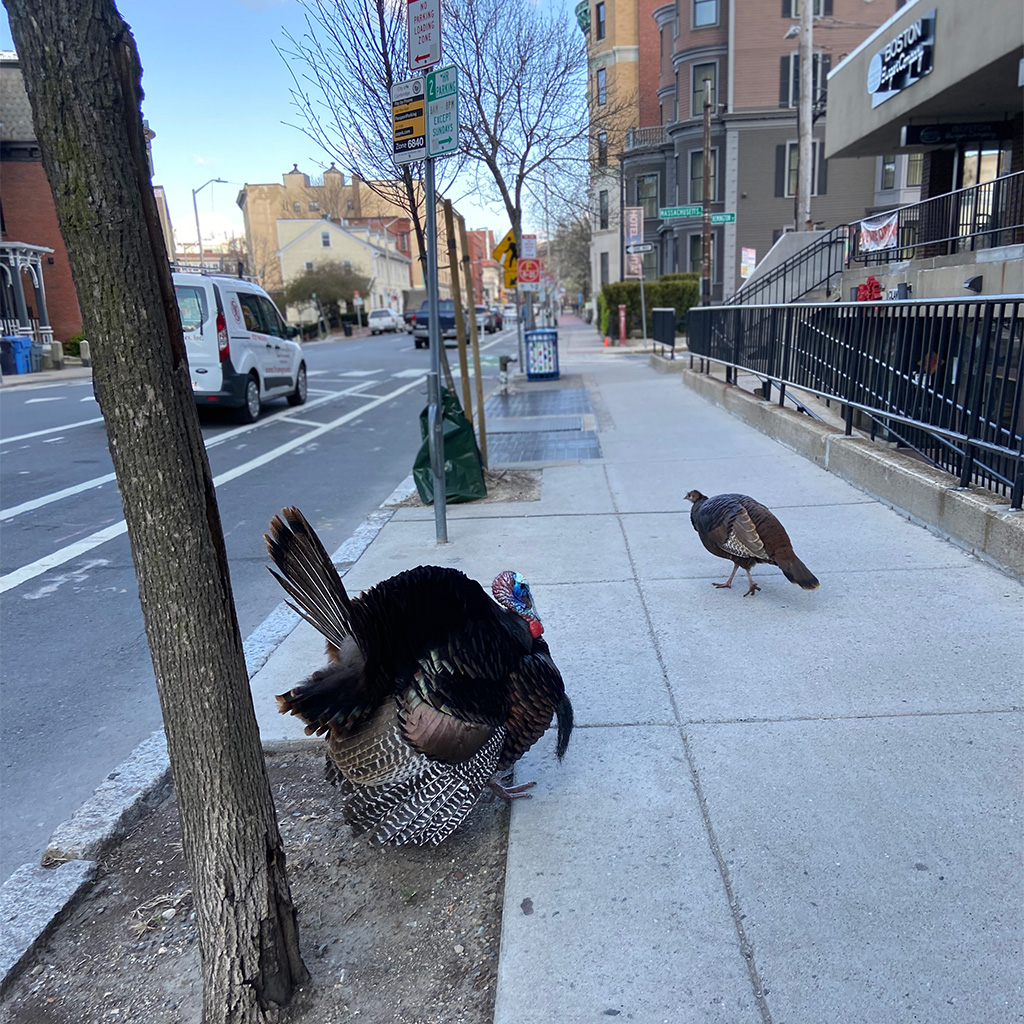 Aggressive turkeys are nothing new. Ben Franklin, in a letter to his daughter in 1784, said that the turkey was “a Bird of Courage, and would not hesitate to attack a Grenadier of the British Guards who should presume to invade his Farm Yard with a red Coat on.”

Besides aggression, urban wild turkeys have other quirks. They may stand in the middle of a road, disrupting traffic, or they may peck at their reflection on shiny surfaces such as automobiles or windows. When a turkey sees its reflection, it thinks another turkey is invading its territory. To drive away the encroaching bird, it will peck at it repeatedly or attack the reflection. (To discourage this continuing behavior, cover, disguise or move shiny objects to where turkeys cannot get at them.) 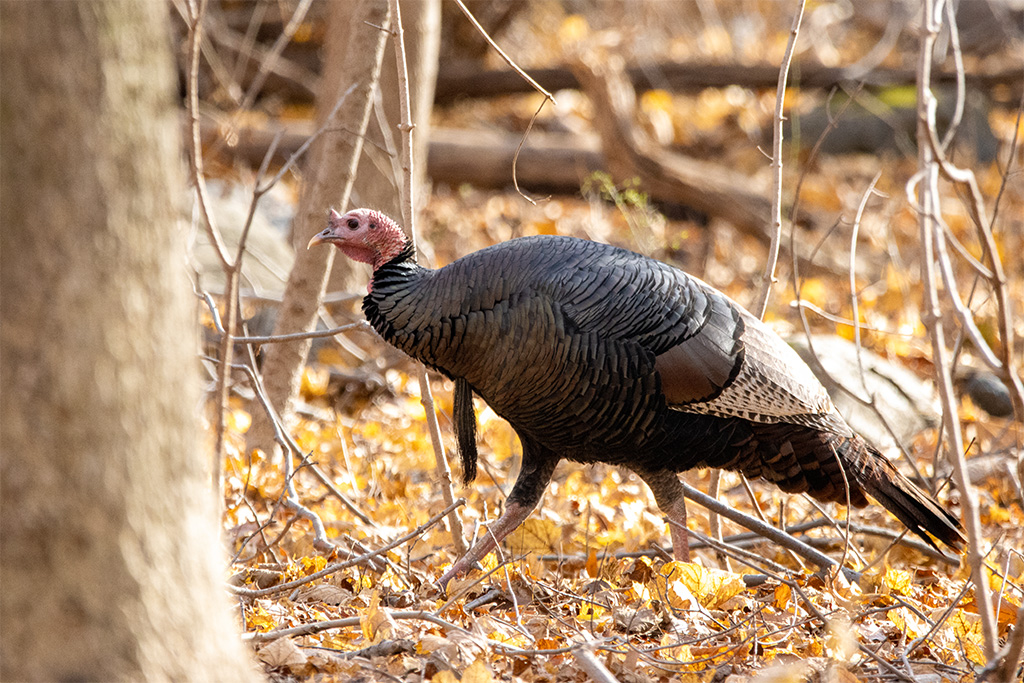 A wild turkey in November. The pointy appendage on the head is called a snood. (Photo: Richard George)

Turkeys often forage in flocks. In the spring, if nuts are difficult to find, wild turkeys dig up plant bulbs. In the spring and summer, turkeys strip seeds from grasses and sometimes eat insects or beetles. In the fall, they scratch the ground to find acorns, beech nuts, wild cherries and other seeds and berries. In winter, when the ground is covered with snow, they eat hemlock buds, ferns, mosses and burdock. During prolonged winter storms, turkeys may stay in trees for several days, living off their fat reserves. If crusted ice forms, though, they are unable to find food; winter storms are the biggest killer of wild turkeys.

Although wild turkeys can fly, they get around mostly by walking. At dusk, turkeys fly into the lower branches of trees and climb branch by branch until they find a sufficiently high roosting spot. In urban areas, turkeys may roost on roofs, ledges or even parked cars. 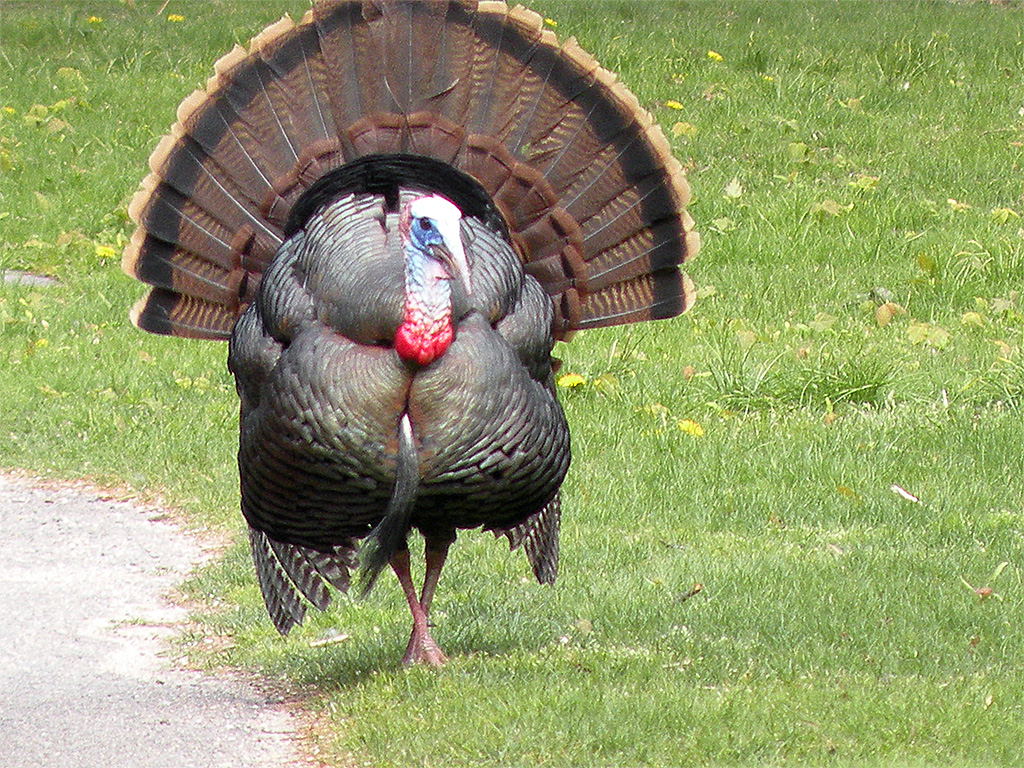 Male turkeys breed with multiple females in the spring. When it is not breeding season, they form all-male bachelor flocks with other males of a similar age.

Turkey females make a nest on the ground, which they incubate for 28 days, leaving only for a brief period during the day to find food. Owing to predation, as few as 10 percent of turkey eggs hatch successfully. Raccoons, skunks, foxes, snakes, coyotes and hawks eat turkey eggs. During their first few weeks, turkey chicks,or poults, are susceptible to predators and the weather; cold, rainy conditions can bring on hypothermia and death. Coyotes and hawks find poults to be easy prey. Only about one-fourth of poults survive past their first month, but after a few weeks they can fly short distances into trees to escape danger. Turkey chicks stay with their mother, sometimes uniting with other mother-poult groups to form a large flock of youngsters and adult females. 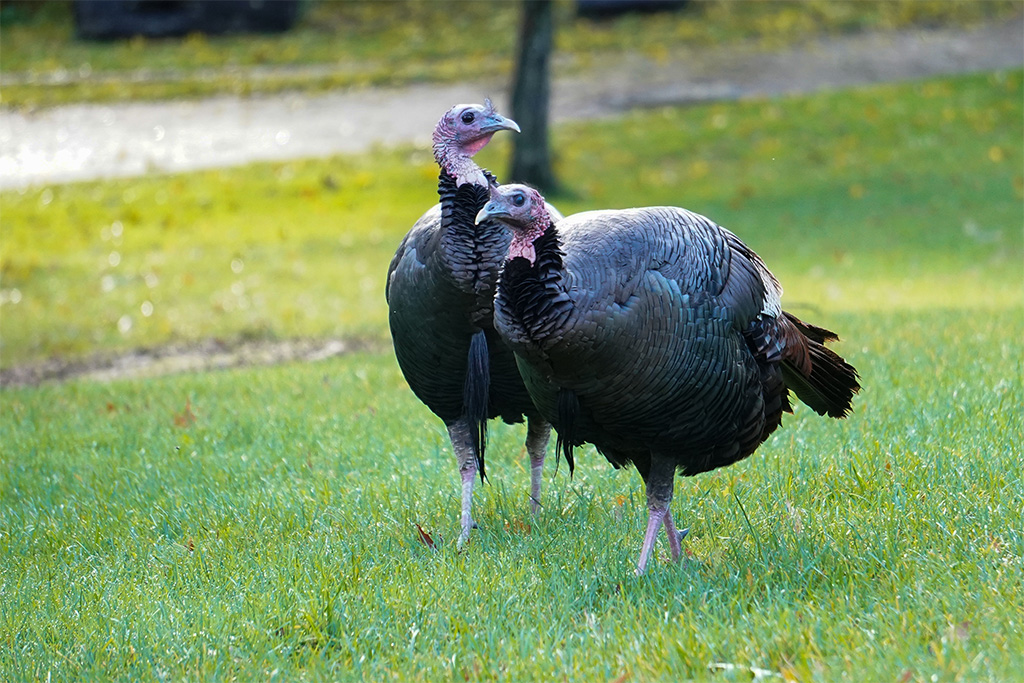