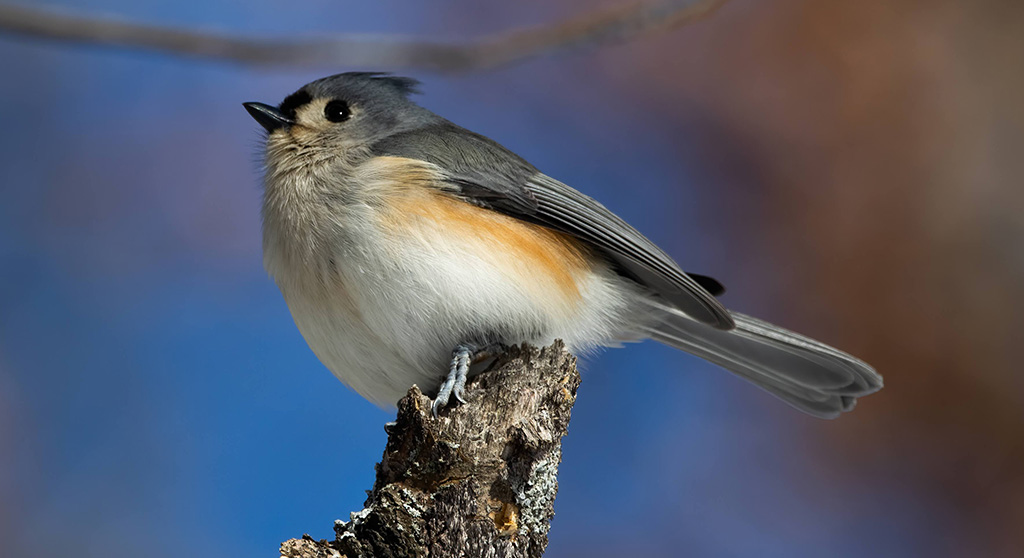 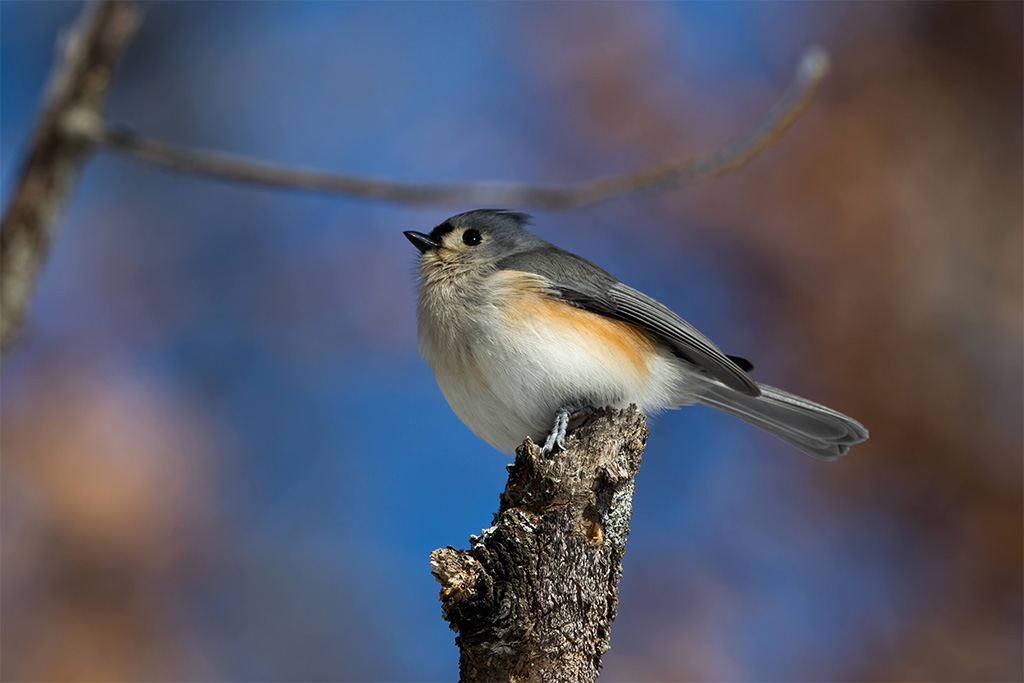 The tufted titmouse sports a crest atop its head, bluish-gray feathers, large black eyes and rust-colored patches on its sides. (Photo: Richard George)

Tufted titmice (or titmouses, as they are sometimes called) live in Massachusetts year-round, and you will often see them at bird feeders in the fall and winter. These little birds take one seed at a time, hammer away the shell, and store the seed in a bark crevice not far from the feeder. They store many caches of seeds throughout their territory during the fall and winter.

These birds nest in holes left by woodpeckers or in tree cavities found in dead trees. They will also nest in human-made nest boxes. Because these birds and other species depend for their survival on dead trees, it is important to let dead trees remain in forests and wooded areas.

The name titmouse comes from the Old English word “mase,” the term for songbirds of the family Paridae. In the 1500s, the word “tit” referred to any small animal or object, and the bird became known as a “titemose.” (According to Merriam-Webster, the word is still used in some British regions to refer to a small horse or small child.)

The tufted titmouse used to be a southern species, but over the years the bird has expanded its range to the north. In the early 1900s, tufted titmice populations reached only as far north as New Jersey. Tufted titmice were first counted in Massachusetts in 1959, when four were observed. In 1960, 34 were counted, and by the 1970s the birds were found over the entire state, wherever there are trees (except for Nantucket). Today, the species happily resides as far north as southern Quebec and Ontario. Scientists think climate change, increased bird-feeding and aging woodlands have contributed to this bird’s northern expansion. 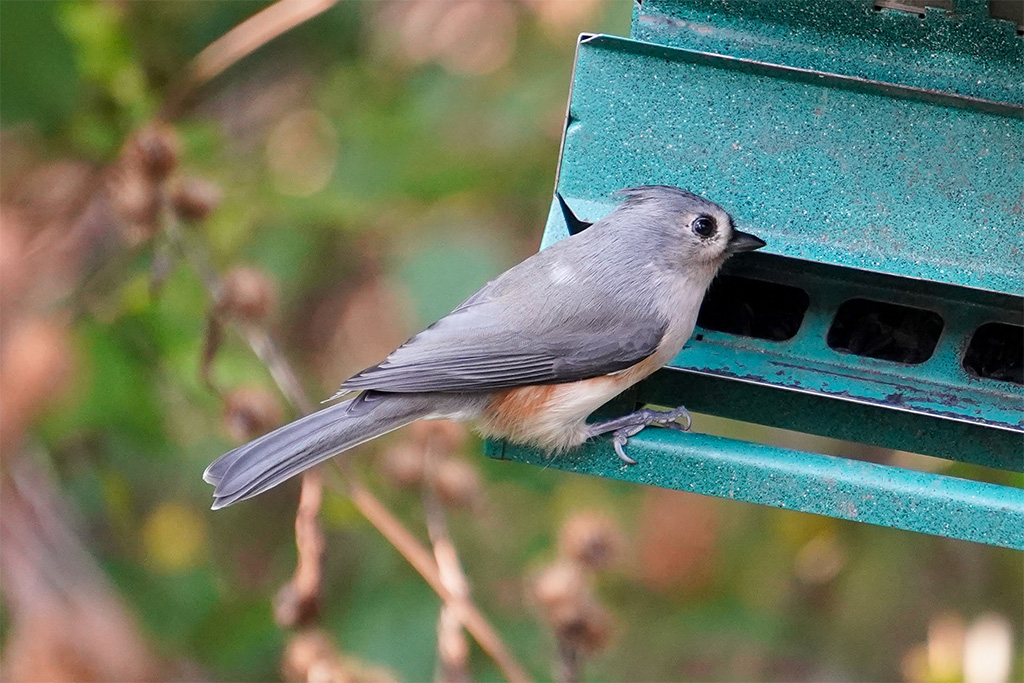 According to a University of Maine study, more than half of all birds in the East will decline because of climate change, and 20 percent will increase. When a bird’s range shifts, conflicts may develop with other bird species. For example, the expanding tufted titmouse range brings it into conflict for food and nest cavities with the black-capped chickadee, which is already established in this range and has a similar diet and foraging style. At bird feeders, the larger titmice always successfully challenge the chickadees. It is not known whether the two species can coexist permanently in a range or whether over time titmice might push out chickadees. 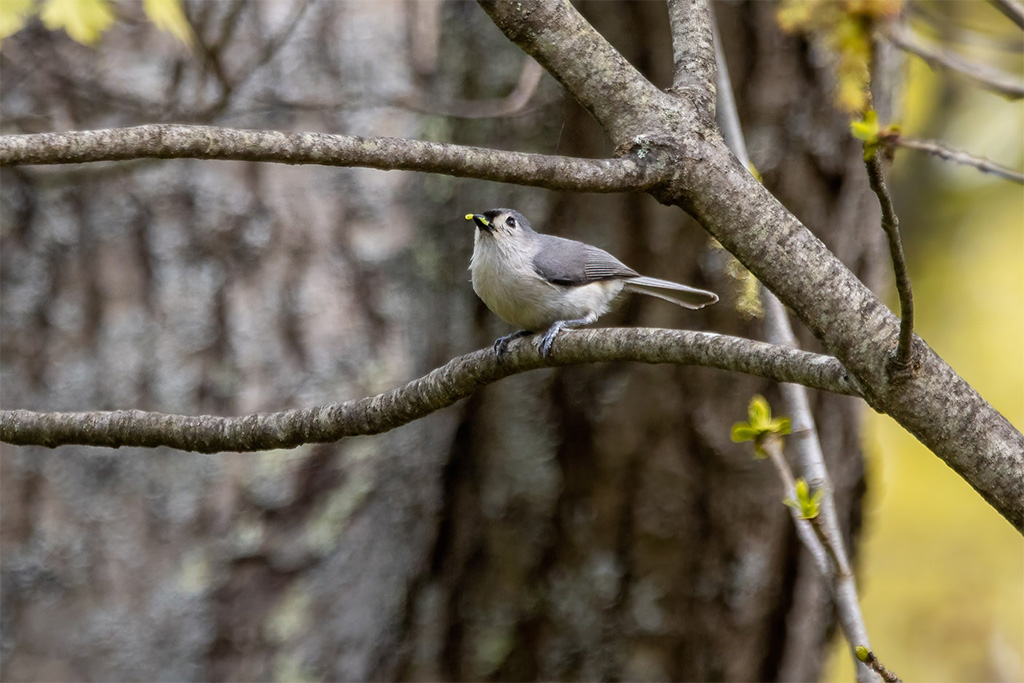 In spring and summer, the tufted titmouse eats insects, spiders and fruit in addition to nuts and seeds. (Photo: Richard George)

Tufted titmice do not migrate, and mated pairs stay in the same territory. When young titmice mature, they travel short-to-medium distances to find new territories. Female titmice use twigs, leaves, moss, strips of bark and grasses to build a cuplike nest. They line the nest with soft items such as feathers, wool, cotton, fur or hair. Sometimes a tufted titmouse will pluck hair or fur for nests directly from the body of a living (usually sleeping) animal. Scientists have found hair from raccoons, squirrels, rabbits, dogs, horses and even people in the nests of these birds. During the summer, titmice eat insects such as caterpillars, ants and beetles. They also eat spiders and snails. In fall and winter, they eat nuts such as acorns. When foraging, tufted titmice always choose the largest seeds they can find.

If you want to encourage these acrobatic little birds to spend time in your yard, you can build a nestbox or stock a bird feeder. 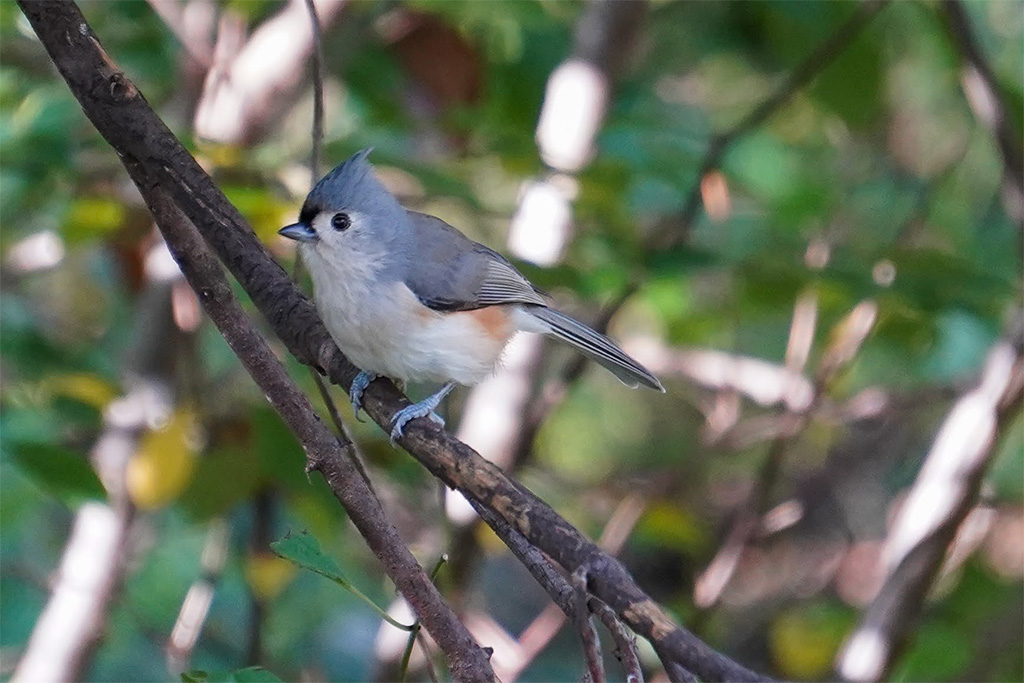