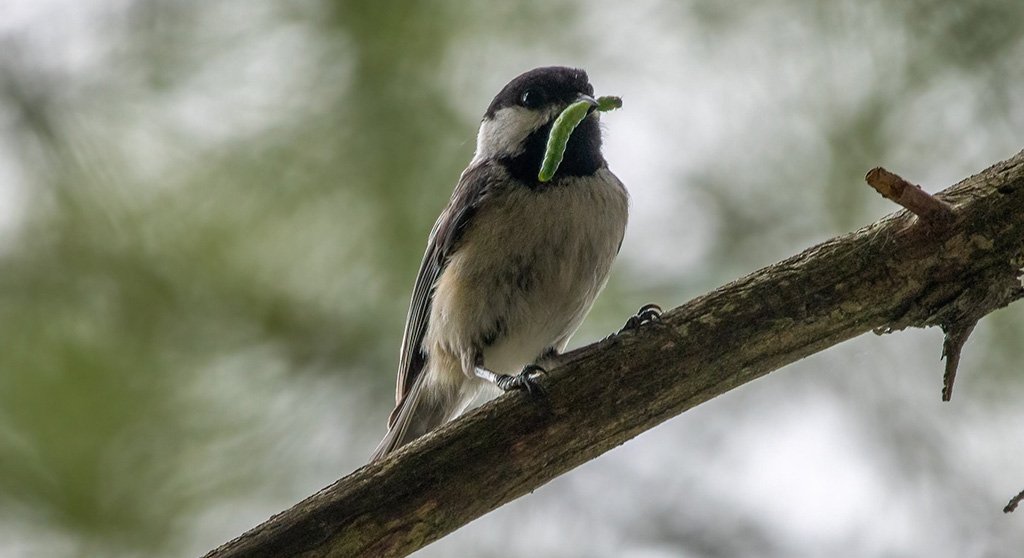 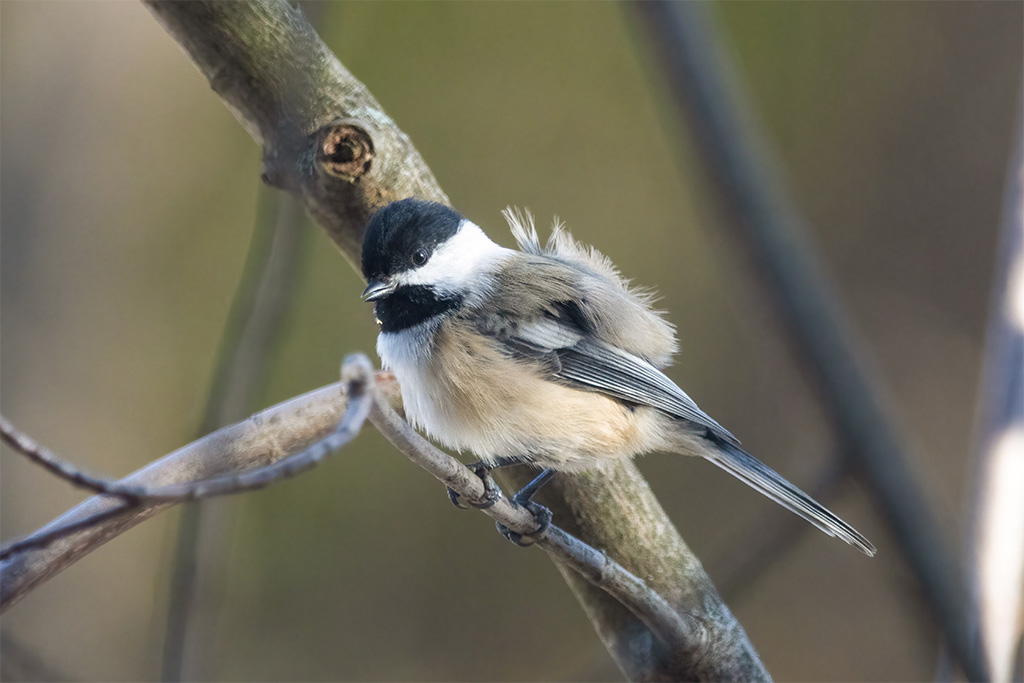 To conserve energy when the temperatures plummet in winter, chickadees lower their body temperatures from about 107 degree Fahrenheit during the day to 54 degrees at night. They are one of only a few birds that can do this. (Photo: Richard George)

The black-capped chickadee (Penthestes atricapillus) has been the state bird of Massachusetts since 1941. This tiny, cheerful bird is one of the most well-known birds in North America. Its black cap of feathers and its chick a dee dee dee call gave rise to its onomatopoeic name.

Chickadees eat mostly insects in the summer. In the winter, insects (and their eggs and pupae) still make up about half of a chickadee’s diet. This is bad news for chickadees because according to many studies, insect populations are declining globally. Insecticides, urbanization and light pollution can all harm insect populations. Some studies indicate that insect populations have declined by 45 percent in the past 40 years. In 2020, one large meta-analysis published in the journal Science examined 166 studies that spanned nine to 80 years; the meta-analysis concluded that terrestrial insects are declining at a rate of 1 percent per year or 9 percent per decade.

What does this insect decline bode for chickadees? It’s difficult to know for sure, but according to the entomologist Doug Tallamy, it takes between 6,000 and 9,000 caterpillars to rear one family of baby chickadees, for these babies do not eat seeds; they can eat only insects. Chickadee parents both are kept very busy feeding the hungry chicks. They carry a caterpillar (or two or three) to the nest about once every three minutes, 14 hours or more per day for 16 to 18 days. That’s more than 300 caterpillars per day. If insect populations continue to decline, it is easy to understand why bird populations, which depend on insects, will also decline.

One of the reasons for the decline in insect populations is the planting of nonnative species.“One of the big problems for insects is that we are landscaping,” Tallamy says, “with plants from someplace else – typically, China. Those plants are not able to support our North American insects.” Of course chickadees prefer areas with trees that support the greatest numbers of caterpillars, he notes. 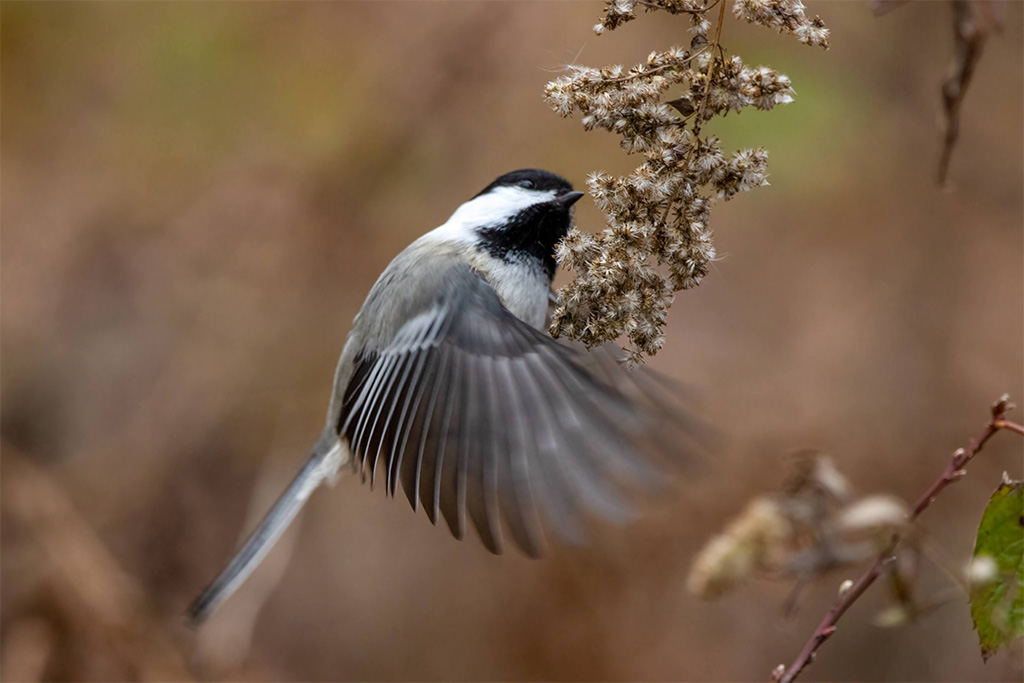 Black-capped chickadees are just over 5 inches. Their black caps and throats contrast with their white cheeks. (Photo: Richard George)

Those are oak, native cherries and plums, willows, poplars, birches and crabapples and apples. These trees also produce seeds and berries that support adult birds, especially in the winter. You can find the native plants that host the most caterpillars here. In our area 473 types of butterflies and moths use the oak (Quercus Fagales) as a host plant for caterpillars; not every person is able to plant an oak tree in their yard, but there are many other native plants that support insects and native birds. Because birds need so many caterpillars to survive, it is easier to plant a tree that supports these caterpillars than to try to feed these birds with bird feeders. Bird feeders can help an adult survive the winter, but they cannot provide the food that baby birds need.

One other simple thing we can do to help butterfly and moth survival is to leave leaves on the ground during the winter because many butterflies and moths pupate on the undersides of leaves or shelter under leaf cover. 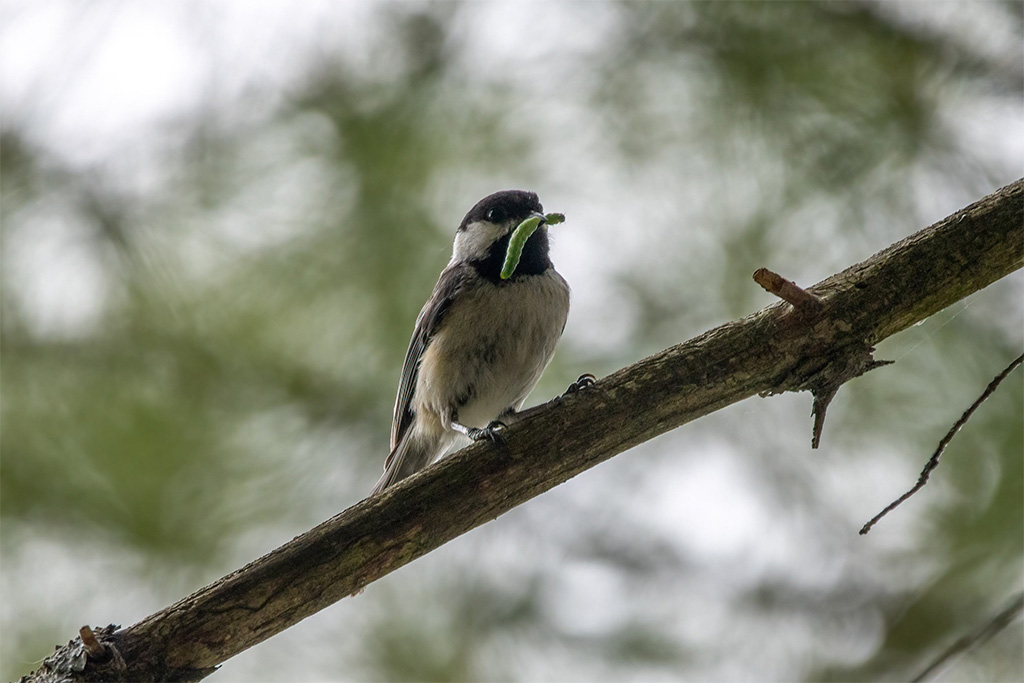 When feeding, chickadees use their strong feet to move to the edges of twigs, sometimes hanging upside down. This one was seen in June. (Photo: Richard George)

There are about 2,249 species of caterpillars in Massachusetts, which live mostly on native plants. According to Tallemy’s studies, when the native plant biomass in an ecosystem falls below 70 percent, the bird population declines.

Still another threat to the black-capped chickadee is climate change. Some of the expected effects of climate change include warmer average temperatures, longer warm seasons, shorter cold seasons, greater rainfall, bigger storms and more acidic oceans. According to Mass Audubon, the black-capped chickadee is highly vulnerable to the effects of climate change. In the eastern part of Massachusetts, chickadees populations are projected to decline by more than 30 percent by 2050. 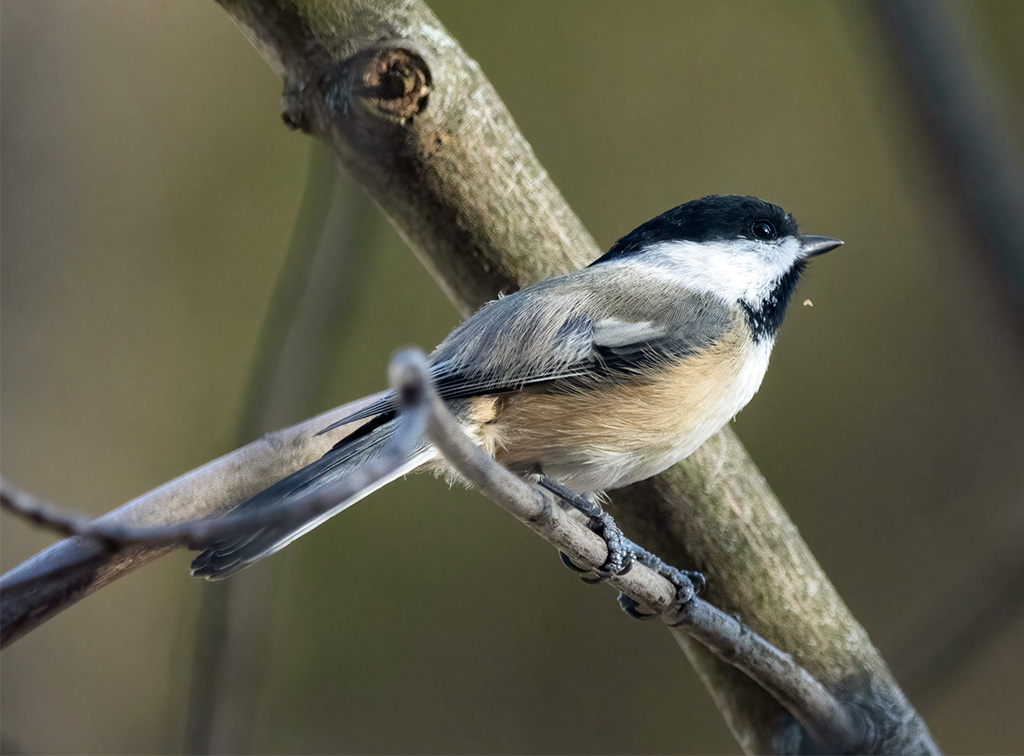 Black-capped chickadees are one of the most common birds in Massachusetts. (Photo: Richard George)

Chickadees can be quite beneficial to humans by helping keep unwelcome insect pests at bay, as noted by Edward Howe Fornbush, an ornithologist who lived from 1858 to 1929:

In 1894 my small orchard became very seriously infested with canker-worms, tent-caterpillars, codling-moths and gipsy moths. No attempt was made to protect the trees from their enemies until the fall, when, by feeding, numbers of birds were attracted to the orchard. Immense numbers of the eggs of the fall canker-worm moth and the tent-caterpillar moth were already deposited upon the trees, and toward spring large numbers of spring canker-worm moths began to ascend the trees and lay their eggs. So many Chickadees and nuthatches were attracted to the orchard during the winter that they destroyed nearly all the insects and their eggs, and the next season, which proved to be one of great insect multiplication, my orchard was the only one in the neighborhood which produced a good crop of fruit, while most of those in town produced little or no fruit … My assistant … estimated that one Chickadee could destroy 138,750 eggs of the canker-worm moth in the twenty-five days during which the female moths lay their eggs.

Chickadees in the city 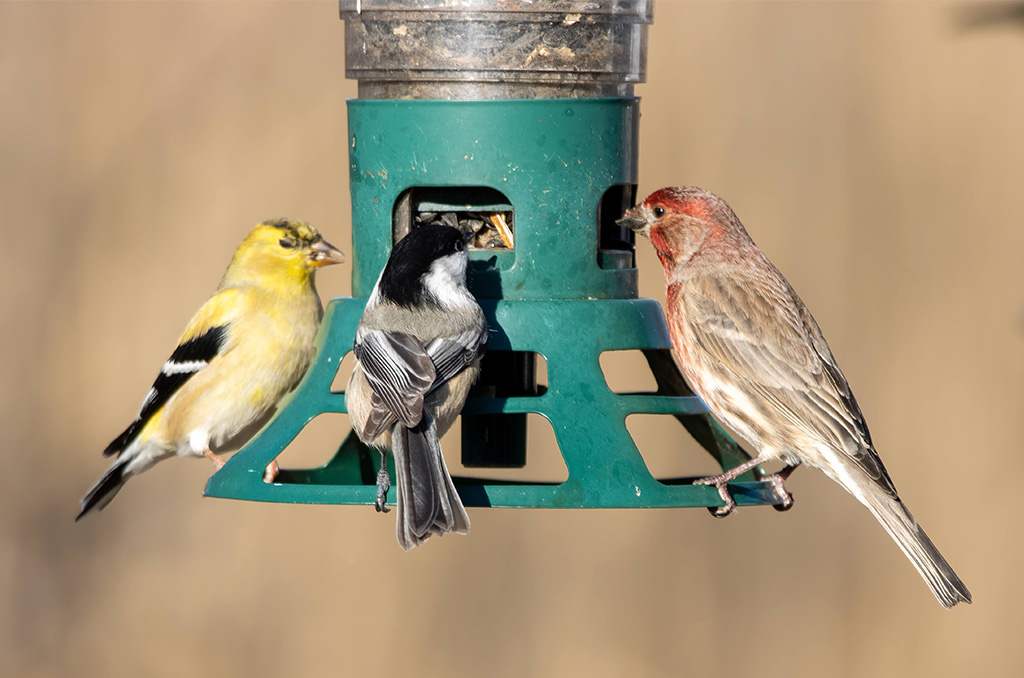 Black-capped chickadees flock with other birds in the winter. Here we see one with an American goldfinch and a house finch. (Photo: Richard George)

Chickadees courting behavior occurs in March through May, when males pursue females. Then a bonded pair works together to carve out a nesting site in dead branches or stumps (or nest boxes, when available). It can take the pair a week or more to excavate an appropriate nesting site. Once the cavity is prepared, the female gathers fluffy vegetation, fur, feathers and moss to line the nest. This process takes a few days. The finished nest is about 3 inches wide and an inch deep. The female lays six to eight eggs, on average, and incubates them for about 12 days. As you can imagine, each chickadee egg is tiny – only about a half-inch long. The male feeds the female during this period when she cannot leave the nest. You can watch this nesting process here.

When the chicks are born, both parents are kept very busy from sunup to sundown feeding the hungry youngsters. In his “Useful Birds and Their Protection,” Forbush tells of a time he watched a tiny chickadee tackle a large caterpillar:

I once saw a Chickadee attempting to hold a monster caterpillar, which proved too strong for it. The great worm writhed out of the confining grasp and fell to the ground, but the little bird followed, caught it, whipped it over a twig, and, swinging underneath, caught each end of the caterpillar with a foot, and so held it fast over the twig by superior weight, and proceeded, while hanging back downward, to dissect its prey.

After about 18 days, the youngsters leave the nest. At this time, they look much like the adults. By the end of the summer, you cannot tell the youngsters and the adults apart. In late summer, the youngsters move away from the parents but still flock with them; by fall, they wander off. Winter flocks of chickadees are not family groups. Flocks of chickadees have a hierarchy, with one chickadee pair No. 1, another No. 2 and so on. Some birds, called floaters, are not paired. If a highly ranked bird dies, the highest-ranked floater takes its place. Floaters do not ever pair up with other floaters. They move from flock to flock, trying to improve their social standing. 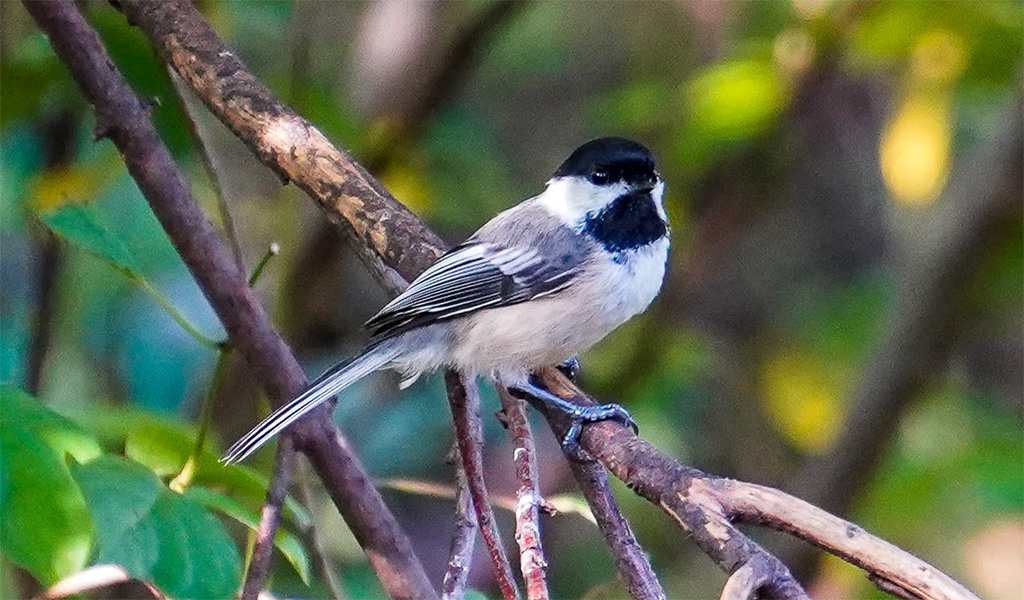 Black-capped chickadees often have a some white on their gray wings. (Photo: Jeanine Farley)

Chickadees are a popular bird, and they have been popular for a very long time. They are charming to watch at bird feeders and they eradicate insect pests, even in winter. In about 1925, Forbush wrote about these remarkable birds:

[Chickadees] will come to your very yard to glean a meal, as well as roam the woodlands in their untiring quest of insects and insect eggs. . . . Throughout the year Chickadee wages warfare on infinite hosts of insect pests, and in effectively reducing their numbers renders invaluable services to agriculture and forestry. This versatile bird has learned to procure its sustenance from trunk and bough, from tree-top and ground, and every crack and cranny in which insects hibernate or lay their eggs. No bug is too small to escape its penetrating eyes, and no caterpillar too large for Chickadee to tackle.

These little birds are such a delight to behold that we owe it to them (and to ourselves) to do whatever we can to ensure that they do not disappear from our region. 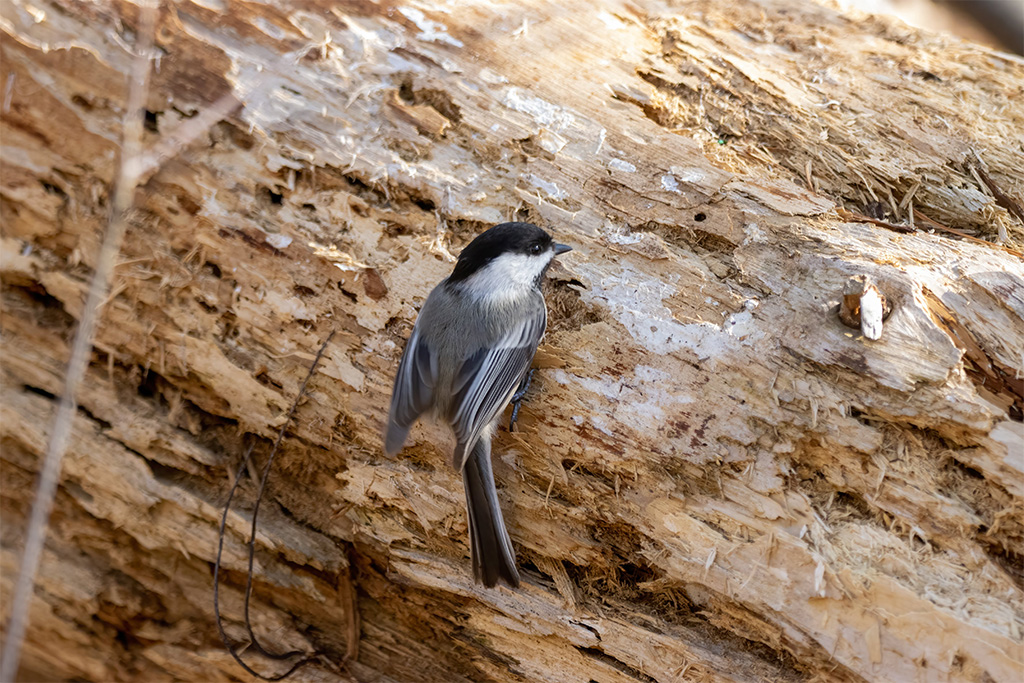