Despite upgrades, 50 million gallons of sewage were released into the Alewife Brook over 2021 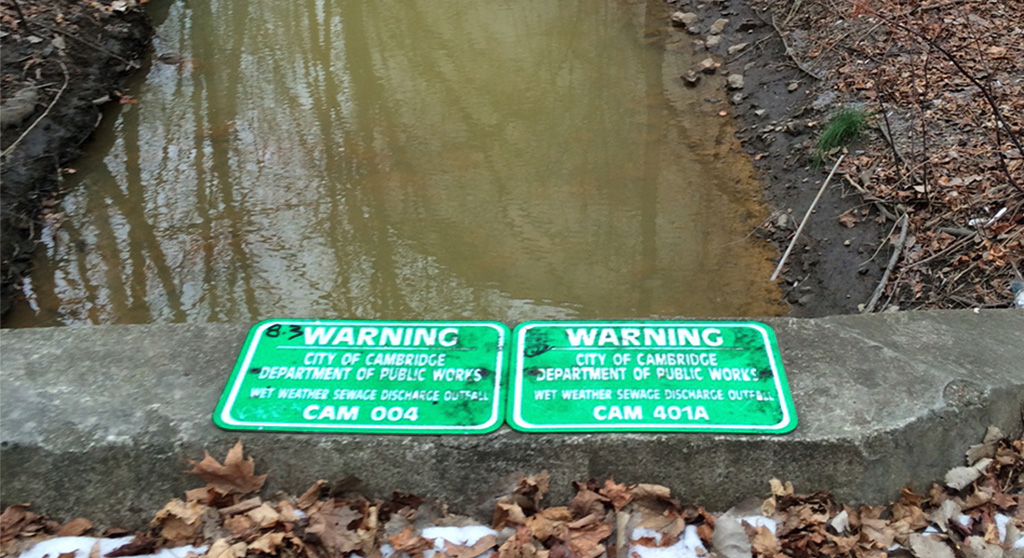 Despite upgrades, 50 million gallons of sewage were released into the Alewife Brook over 2021

By Kristin Anderson and David White 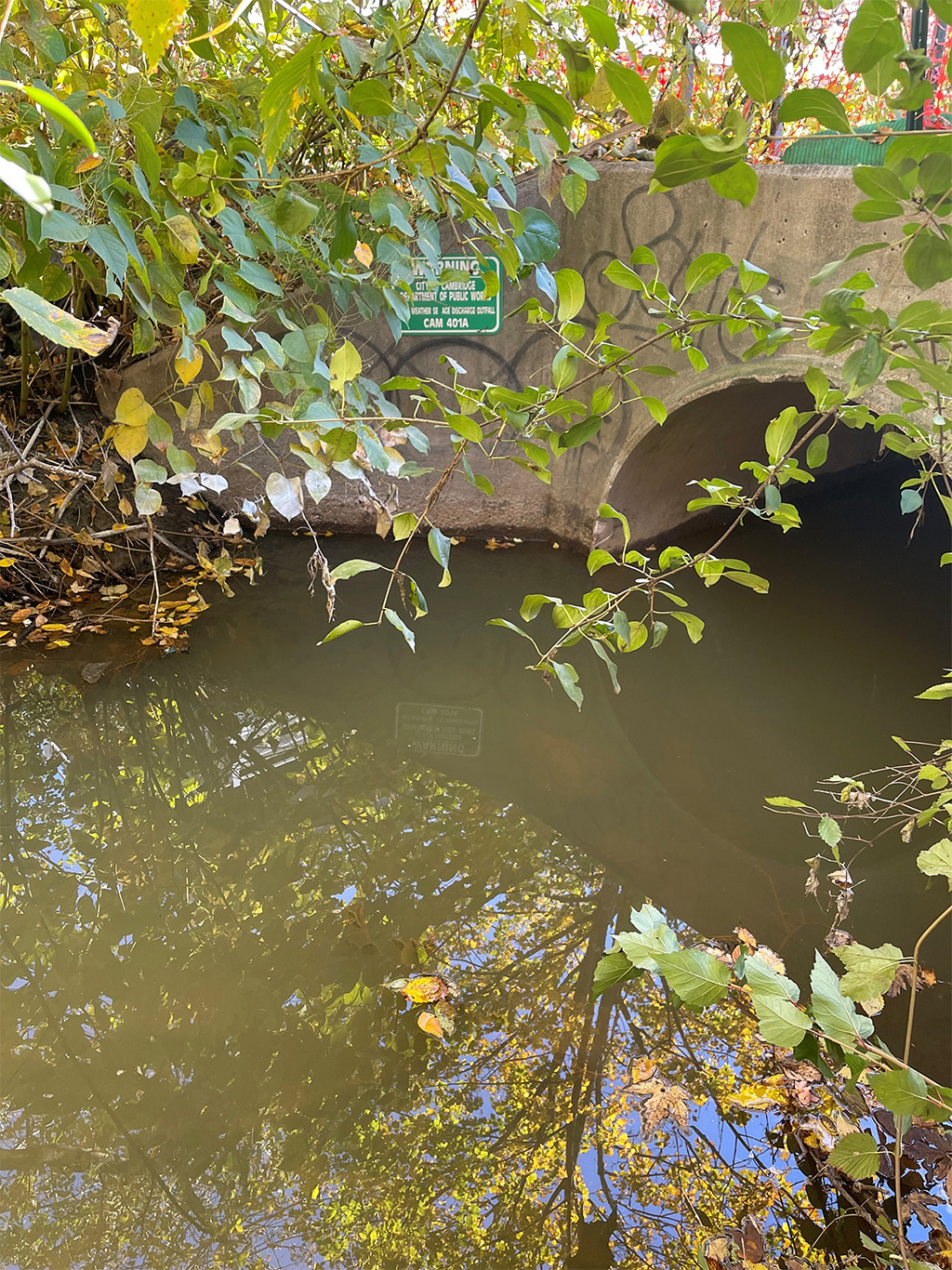 Discharge into the Alewife Brook behind the Alewife parking garage on Nov. 13. (Photo: Kristin Anderson)

Fifty million gallons of sewage-contaminated stormwater were discharged into the Alewife Brook from the cities of Cambridge and Somerville in 2021, according to websites for those two cities and the Metropolitan Water Resources Authority. There was as much sewage-contaminated water discharged into the Alewife Brook last year as in 1997, before the implementation of a $200 million plan to modernize the area’s antique combined sewer systems.

Pollution persists in the Alewife sub-watershed because the area, already prone to flooding, is densely developed with impervious surfaces including pavement, rooftops and sidewalks. To make the matter worse, during major flood events when the Mystic River rises, it flows backward into the Alewife Brook, reversing the brook’s direction. This conveys the contaminated floodwater containing untreated sewage back upstream through vulnerable neighborhoods in North Cambridge and East Arlington, into the Little River and Belmont, and into residents’ homes, yards and parks. The situation is expected to get worse due to climate change.

Cambridge shares the concerns of environmentalists watching the discharge levels and in the past 20 years has completed more than 20 large sewer separation and stormwater holding tank projects, said Kathy Watkins, the city’s assistant commissioner for engineering. “It’s a continuous improvement program we’re committed to.”

But last year was extraordinary in its power to overtake the improvements the city has made: “The latest data I’ve seen shows 2021 was the 16th wettest year on record, and July was the wettest on record since 1895,” Watkins said. “The [work since 1997] has been an incredible success, but the work is not done.” 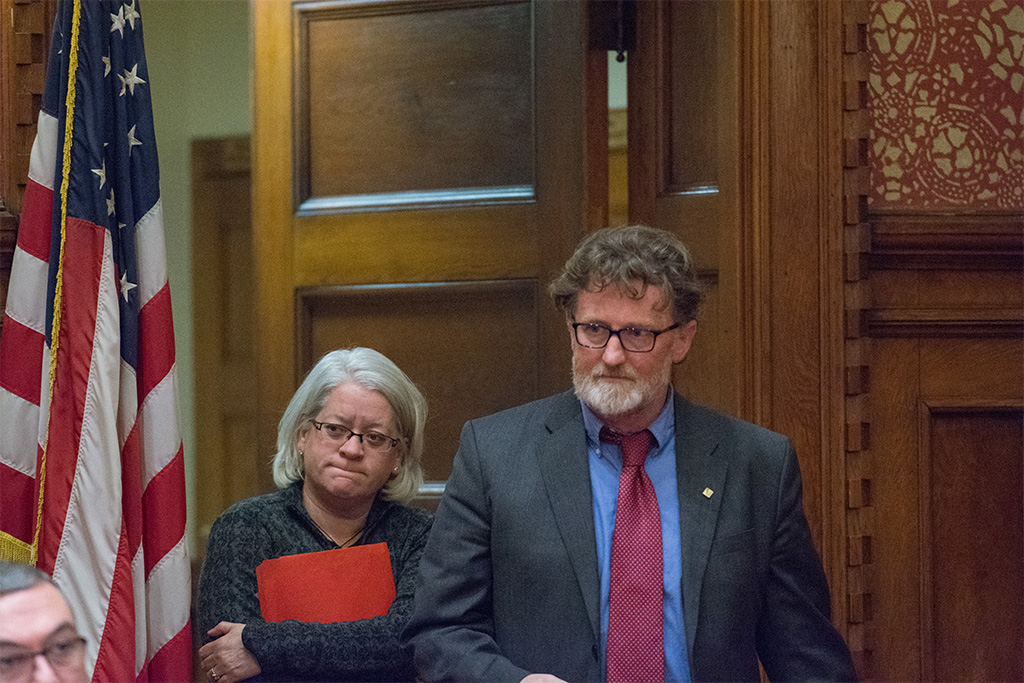 Cambridge staff also parts ways with some advocates on the emphasis placed on floodwater management. It’s made decreasing flooding a priority with the installation of a dozen stormwater tanks, including the latest at Parking Lot 6 on Bishop Allen Drive, which captured roughly 3.5 million gallons of stormwater last summer that gets stored and pumped into the system when it’s safe, Watkins said. The next project is a 1.3 million gallon tank and 100,000-gallon bioretention basin at the Tobin School campus.

“Sewer separation does not address flooding. In some ways it can actually exacerbate flooding. So when we’re looking at reducing flooding, we look at things like stormwater tanks, we look at how our system is designed, we look at how properties are designed when people are redeveloping their property,” Watkins said.

Many alarmed by sewage-contaminated discharges have a different focus: combined sewer overflow.

What is a CSO? 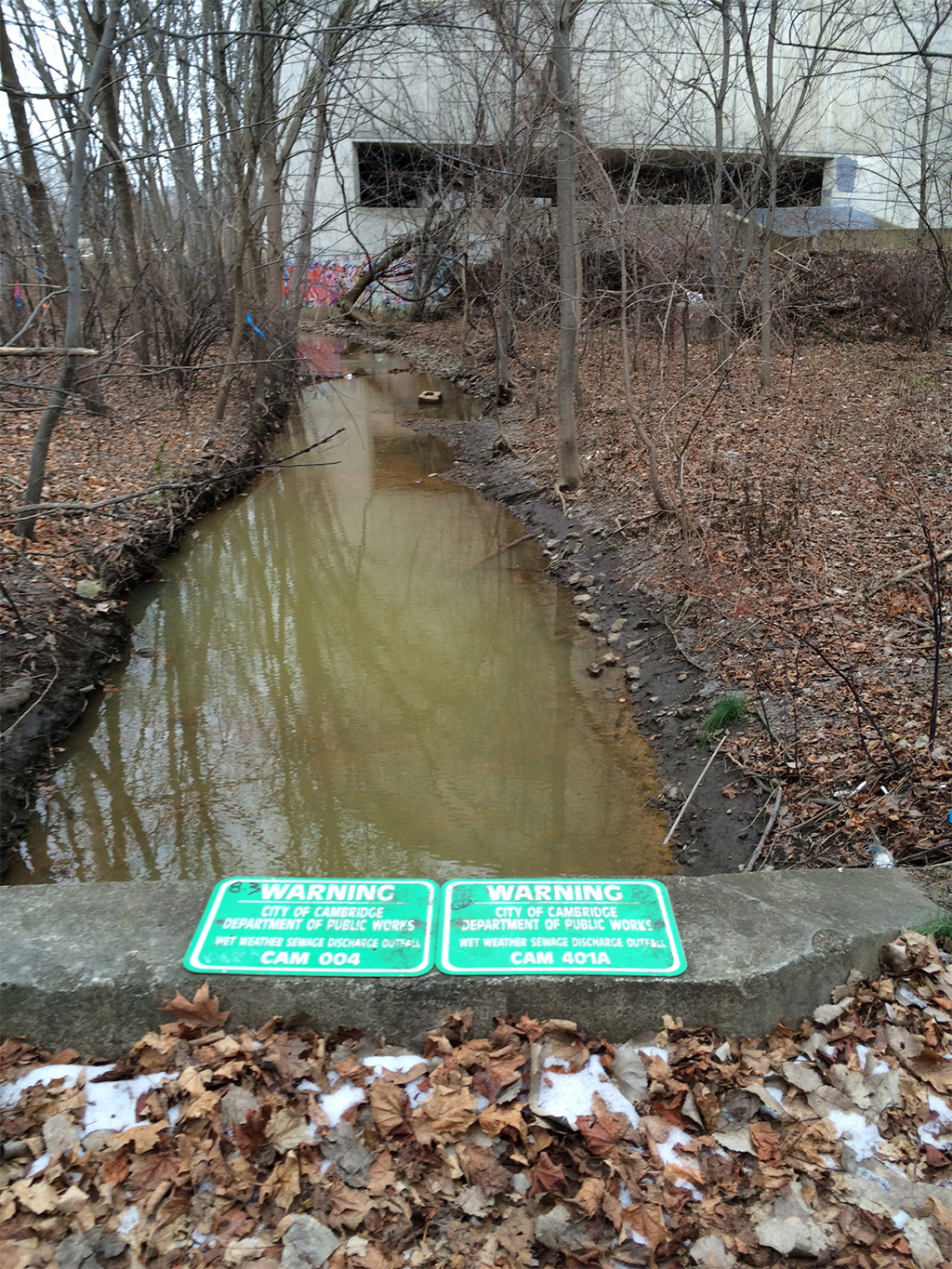 A combined sewer overflow is the discharge of untreated sewage mixed with stormwater into local waterways. These overflows happen when heavy rains or snowmelt overwhelm a sewer system where sewage and stormwater pipes are connected. Normally, these pipes send sewage to the Deer Island treatment plant, but when they overflow, sewage flows out through the stormwater pipes into rivers and brooks such as Alewife Brook and the Little River.

Cambridge and Somerville have been sending untreated sewage mixed with stormwater directly into the Alewife Brook through sewer outfalls – a pipe or conduit that carries stormwater (sometimes combined with raw sewage) into a body of water. These sewers, relics of combined sewer systems from the 19th century, are known as “one-pipe systems.”

The combined sewer system carries stormwater, industrial wastewater and untreated domestic sewage away in a single pipe out to the Deer Island water treatment plant. This one-pipe system is often overwhelmed during and after storms, when a mix of untreated sewage and stormwater is discharged, via outfalls, directly into the Alewife Brook. Rains, tides and river currents carry the pollution to Boston Harbor via the Mystic River.

As a result of the landmark Conservation Law Foundation Boston Harbor cleanup court case in the 1980s, the Environmental Protection Agency enforced the Clean Water Act and required that the CSO pollution end. The act created federal standards for discharges of pollution. The state Legislature then created the MWRA to manage and modernize the Boston water and sewer system, including building the sewage treatment facility at Deer Island. It was determined that the cost of totally replacing the existing CSO system would be very expensive and burdensome to the ratepayers, especially in less affluent communities. Thus a political compromise was made to only do part of the work.

The 12-year plan to fix CSOs

For the Little River-Alewife Brook watershed, the plan was to eliminate half of the Alewife CSOs and create a wetland in Alewife Reservation to clean some of the discharge. According to the DEP’s 2019 Alewife Mystic Final Variance Fact Sheet, the initiative promised the public an 85 percent reduction in sewage pollution while satisfying a Department of Environmental Protection requirement that improvements were being made. The Long Term CSO Control Plan split this work into seven large projects that took more than a dozen years to complete. All of this work was finished by 2015.

Victory was declared at a ribbon-cutting ceremony at the newly created Alewife Reservation Constructed Wetland in North Cambridge. This celebratory event marked the completion of the first LTCP for remediating the CSOs. Cambridge had good reason to celebrate: This project is a rare example of cutting-edge bioengineered green infrastructure.

The wetland collects stormwater from Cambridge’s Huron Village neighborhood north to Fresh Pond Parkway. The stormwater is pumped from the surrounding commercial and residential areas into a holding tank known as a “forebay,” in which sediment settles before the water is released into the wetland to be biologically filtered for contaminants and conveyed into the Little River just above where it becomes the Alewife Brook at the Minuteman Trail footbridge.=

To many people, this beautiful park appears to be an urban wild, with its trails, 119,000 native plantings, great blue herons, ducks, swans, eels and other wildlife. But it is so much more than that. The wetland provides flood relief and reduces sewage pollution via bioremediation while helping to protect Cambridge’s water supply at Fresh Pond. Built wetlands are tertiary treatment systems that use natural processes involving wetland vegetation, soils and their associated microbial assemblages to improve water quality, according to the EPA.

It is hard to imagine how much worse off the area would be without the work that was completed in 2015, local environmentalists say. 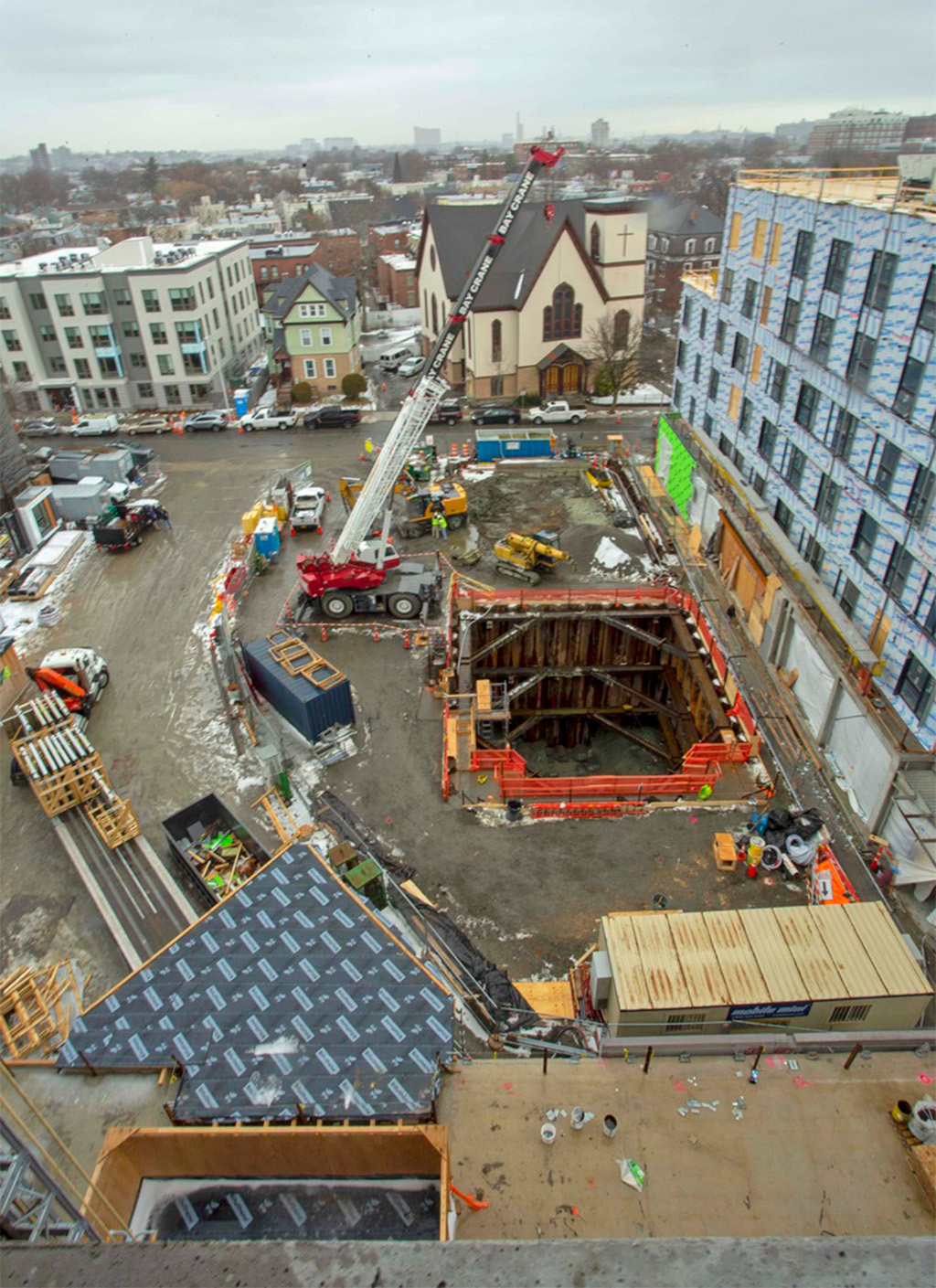 The “PL6” stormwater tank in The Port is seen under construction. It came online in 2020. (Photo: City of Cambridge)

How is it possible that after all the work to reduce discharges, 2021 saw the same volume of hazardous pollution as before the investments and CSO activations that are six times worse than the original plan promised?

Environmentalists say the answer is probably a combination of factors such as climate change and the wetness of the year, construction with rooftops, roads and parking lots made of impervious materials, vanishing trees and vegetation that used to slurp up groundwater and new developments tied into combined sewer system lines that reduce system capacity.

There is a problem with “illicit connections” at developments – where construction connects to a stormwater system instead of a drainage system – that communities are required to identify and remove, Watkins said. (Belmont, which has a system flowing to the Alewife Brook, is under an Environmental Protection Agency consent order to address illicit connections.) In Cambridge, larger development that tie into the sewer main must remove four gallons of water from the sewer system for every gallon they put in, Watkins said.

Some environmentalists propose a second Long Term Control Plan that would expand on the original’s sewer separation and green infrastructure, including bio basins, bioswales, planter boxes, rain gardens and permeable-asphalt roads, as well as closing the remaining Alewife Brook outfalls and adding a holding tank for stormwater with extra capacity and another bioengineered wetland park with trails and native plantings.

In addition to sewer infrastructure upgrades, experts say improvements around the Mystic River must be made to reduce flooding. An important key to controlling Alewife area flooding is the proper operation, maintenance and upgrades at the Amelia Earhart Dam. If the Amelia Earhart Dam is breached or flanked during future storms, a surge of water will be pushed up the Mystic into the Alewife Brook and into the neighborhoods of vulnerable populations.

“I always see these things as ‘yes, and,’” Watkins said. “Sewer separation is a part of it. Reducing combined sewer overflows is certainly a part of it. But there are other strategies as well that are important and may have a more significant impact on decreasing flooding and improving water quality.”

A review of federal flood maps reveals an estimated 3,500 Cantabrigians, 1,200 East Arlington residents and 300 Belmont residents living in the Little River-Alewife Reservation’s 100-year floodplain – a number that does not count the 643 residents in housing on the former Belmont Uplands/Silver Maple Forest site who could be stranded and surrounded by water in the event of a 100-year flood.

The Mystic River and Alewife Brook are below the mean high-tide level of Boston Harbor and have historically been tidal, with the water flow direction changing with the tide. For many years, this tidal flow was used to power mills.

Because of pollution and malaria concerns, the river flows were changed in 1909 with the construction of the Craddock Dam and tidal gates at Medford Center. This dam was replaced in 1966 by the Amelia Earhart Dam and pumping station at the mouth of the Mystic that pumps water into the harbor as needed to maintain a predictable water level.

The Amelia Earhart Dam is considered key to reducing flooding in the Mystic River and Alewife Brook. If the Mystic rises too high, water can flow backward in Alewife Brook toward Cambridge and Belmont. With global warming and sea-level rise, this dam will have to be reinforced to continue to protect the Mystic and the Alewife.

“The dams are critical in terms of providing protection to upstream communities,” Watkins said. The past year saw good progress in working with other municipalities and the state on what it would take to raise the dams by 4 feet and providing relief to a dozen communities with more than 108,000 residents and $60 billion-plus in real estate value. “We are we are working incredibly hard in terms of making sure this is a priority for the state.”

A version of this story appeared originally on the Belmont Citizens Forum.