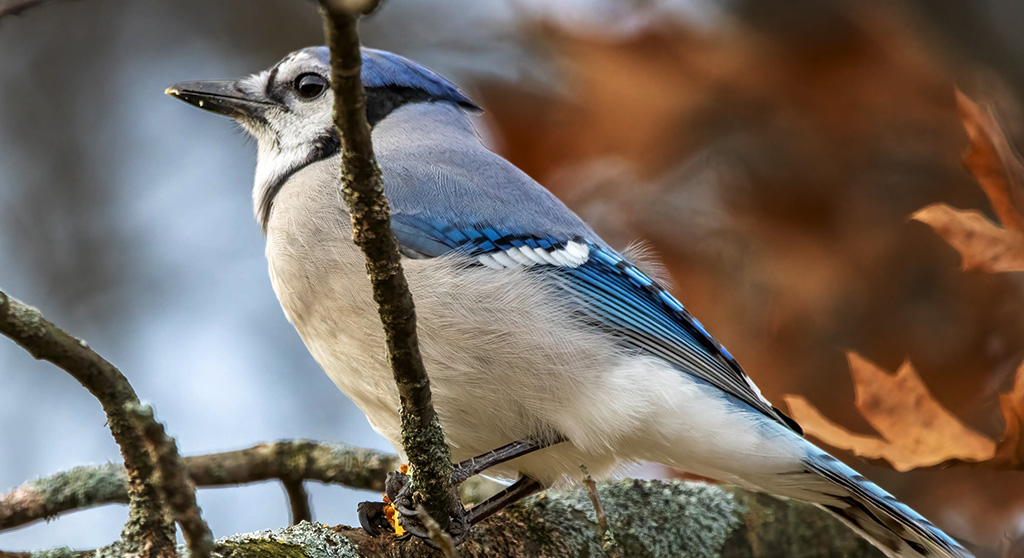 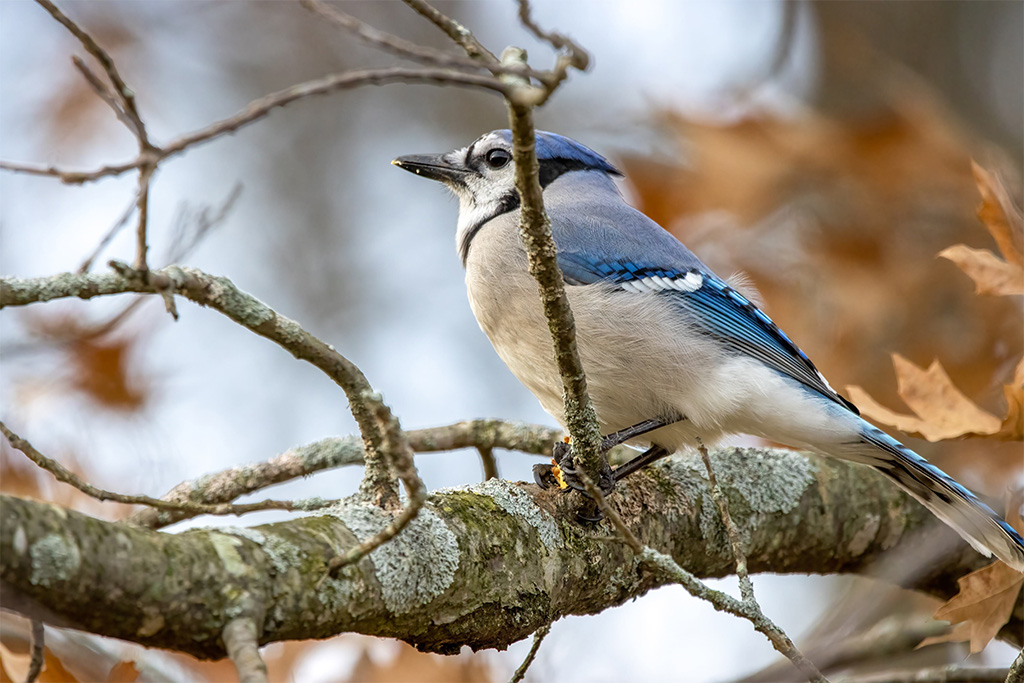 Blue jays (Cyanocitta cristata) are squawking, raucous birds that are members of the crow family (Corvidae). As such, they are curious and highly intelligent, which is one of the reasons they are able to elude predators and live so successfully near humans.

Despite their name, blue jays do not have any blue pigment in their feathers – what we see is actually blue light refracted back through an unusual structure of feathers while they absorb other wavelengths. If you hold a blue jay feather in the shade away from direct light, it will look brownish gray. And while if you grind up a feather of a cardinal, you create a pile of reddish powder, grinding up the feather on a blue jay would creates a pile of brownish powder. These refractive microscopic pockets of air, called structural color, are a feature of all blue-colored birds – from blue jays to bluebirds, from peacocks to parrots. 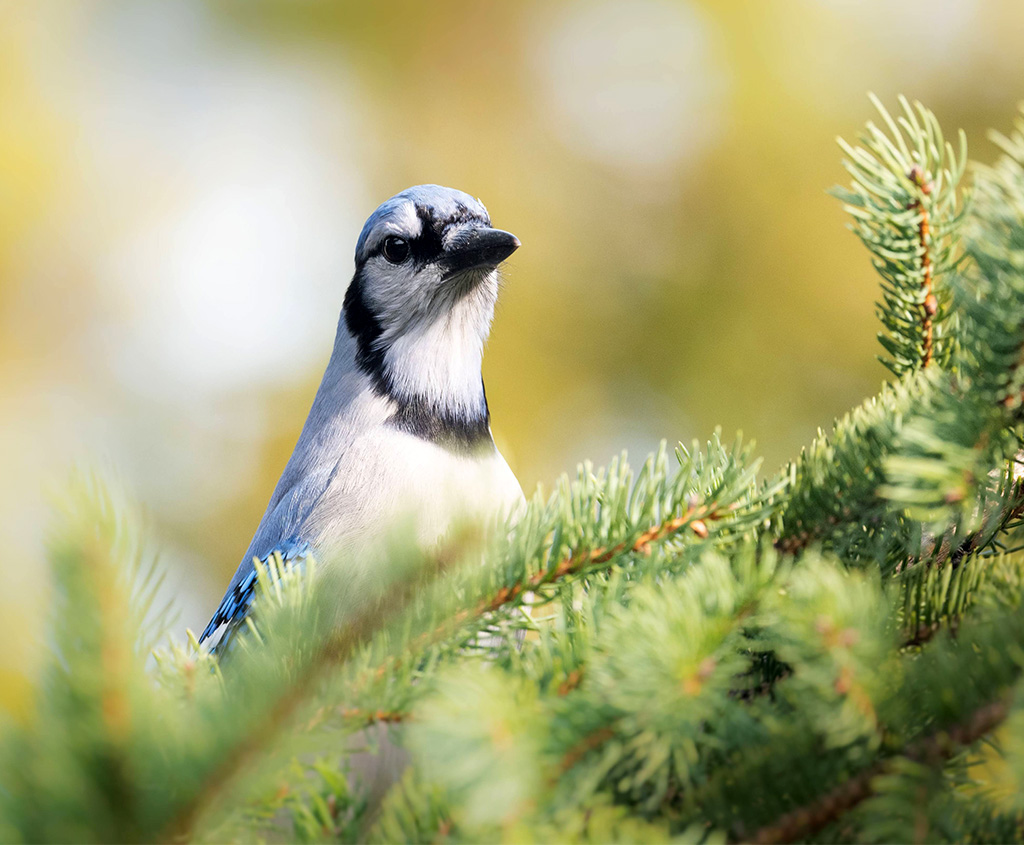 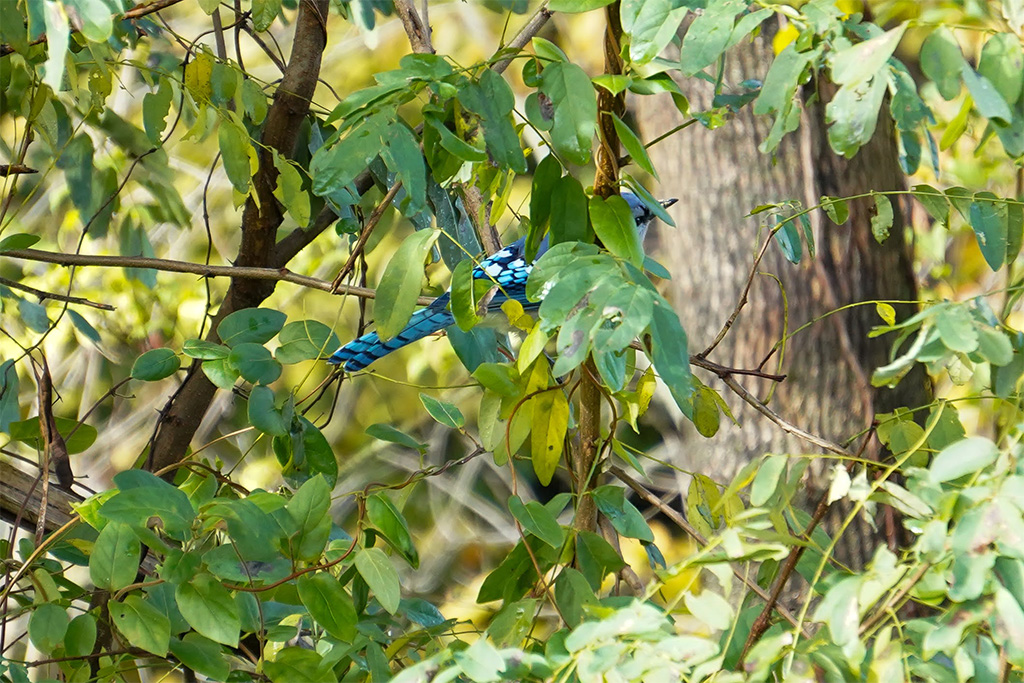 Blue jays practice a behavior called anting. The jay picks up an ant in its beak and wipes it through its feathers. When the jay rubs the ant, the ant sprays formic acid as a defense mechanism. Formic acid is extremely bitter. By fooling the ant into spraying its formic acid before it is eaten, the jay ensures that it eats a nutritious morsel with no unpleasant mouth consequences. The process of making ants palatable is an important survival skill, and even captive jays who have never seen insects before demonstrate anting behavior, which means that this behavior is genetic and not learned. 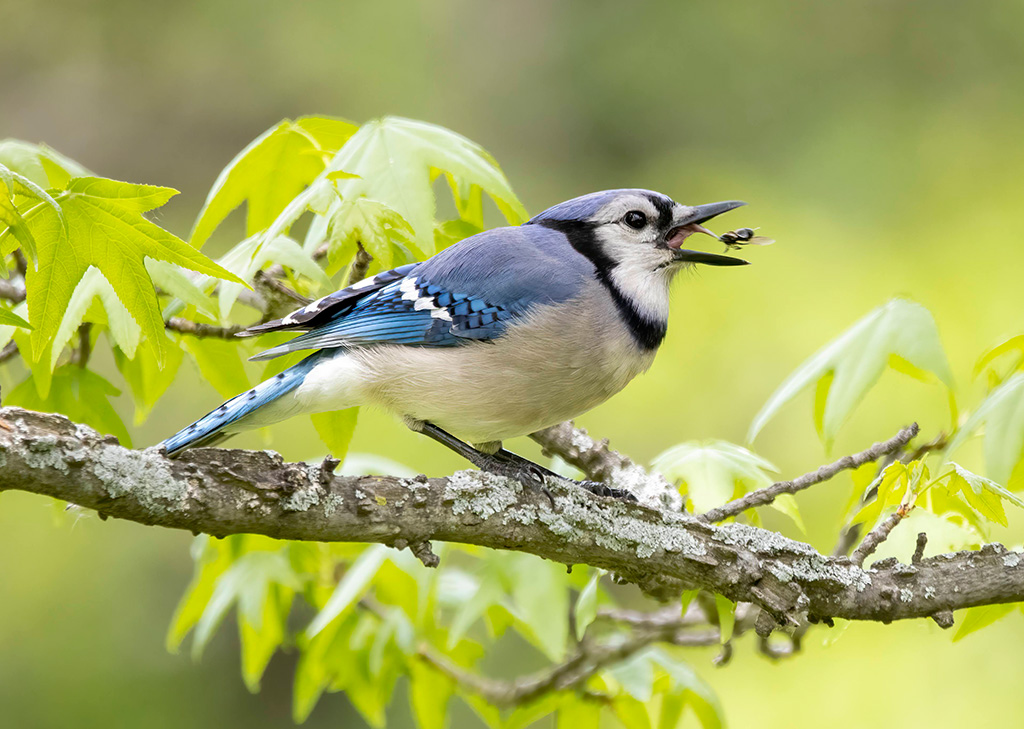 Although 75 percent of a jay’s diet is vegetable matter, the birds are omnivores and will eat insects or small invertebrates. (Photo: Richard George)

Interestingly, the word “formic” comes from the Latin word “formica,” which means “ant.” The German chemist Andreas Marggraf first distilled this acid from red ants in 1749. Not all ants produce formic acid, though, and jays will eat ones that don’t without rubbing them first.

Mark Twain recognized the loftier qualities of blue jays when he wrote:

You may call a jay a bird. Well, so he is, in a measure – because he’s got feathers on him, and don’t belong to no church, perhaps; but otherwise he is just as much human as you be … Yes, sir, a jay is everything that a man is. A jay can cry, a jay can laugh, a jay can feel shame, a jay can reason and plan and discuss, a jay likes gossip and scandal, a jay has got a sense of humor, a jay knows when he is an ass just as well as you do – maybe better.

Blue jays do make an astoundingly large variety of sounds. In the 1903 book “Bird Lore,” Vincent Gorman wrote: “While walking through the woods one day I heard a noise similar to that produced by an unoiled grindstone. I investigated, knowing that none of those implements were to be found in that vicinity, and were surprised to find the squeaks made by a Blue Jay.” Blue jay sounds range from high-pitched shrieks (a warning to intruders) to a jeer-jeer cry, from a ringing bell-like noise to a wheedle-wheedle call, from a clicking call to a soft song to a sound like a rusty gate to imitations of other birds (including hawks, chickadees, catbirds and goldfinches). These clever birds can imitate a hawk to scare feeding songbirds away from a bird feeder, leaving all the food for the jay. They sometimes even imitate human speech. 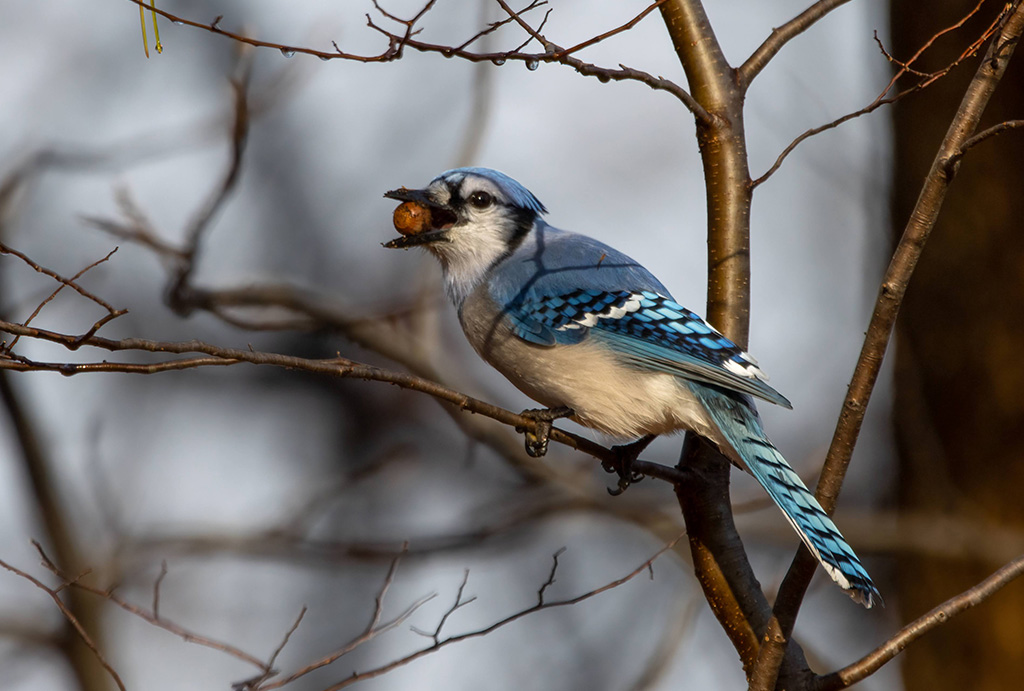 A blue jay uses its strong black bill to crack nuts, such as this acorn. (Photo: Richard George)

Besides being clever and resourceful birds, many researchers believe that blue jays helped spread trees throughout the Eastern United States after the last glacial period. Blue jays collect acorns and other nuts, which they bury up to several thousand meters away from where the nuts first dropped to the ground. One blue jay can store 3,000 to 5,000 nuts per year, many of which the jay will eat over the winter, but some of which will germinate and grow.

John James Audubon wrote about the difficulties he encountered when he shipped blue jays to England with the hope of releasing them in the English woods:

In the winter of 1830, I purchased twenty-five of these birds … which I shipped to New Orleans, and afterwards to Liverpool, with the view of turning them out in the English woods. They were caught in common traps, baited with maize, and were brought to me one after another as soon as secured … When the cage was filled, it was amusing to listen to their hammering; all mounted on their perch side by side, each pecking at a grain of maize, like so many blacksmiths paid by the piece. They drank a great deal, ate broken pecan nuts, grapes, dried fruits of all sorts, and especially fresh beef, of which they were extremely fond, roosted very peaceably close together, and were very pleasing pets … They bore the passage to Europe pretty well, and most of them reached Liverpool in good health; but a few days after their arrival, a disease occasioned by insects adhering to every part of their body, made such progress that some died every day. Many remedies were tried in vain, and only one individual reached London. The insects had so multiplied on it, that I immersed it in an infusion of tobacco, which, however, killed it in a few hours.

Sad outcomes, indeed, for these unfortunate blue jays in the hands of humans, but perhaps just as well, since these birds are native to North America and may not have enhanced the English countryside as Audubon hoped. (Eurasian jays live in Europe, but they are pinkish birds and not easily mistaken for our North American variety.) 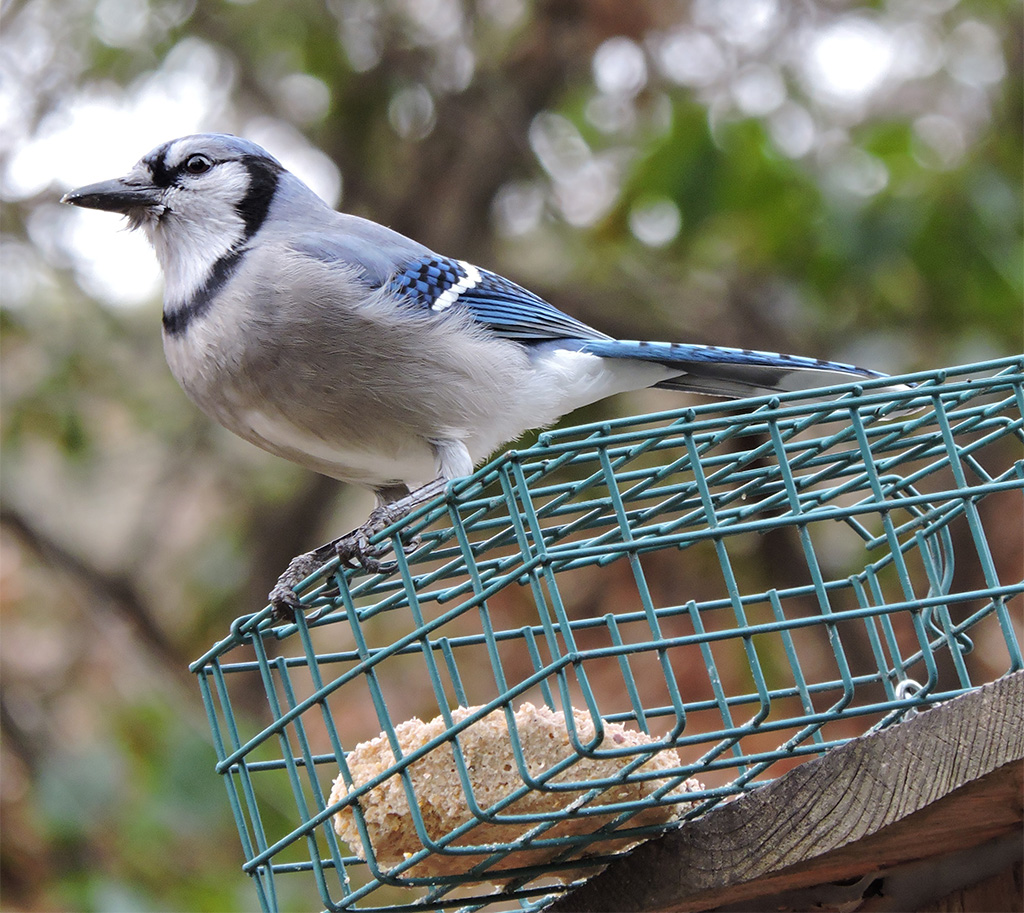 Blue jays are common, but their numbers are declining – not just in Massachusetts, but in New England and the Eastern United States as well. It is not known what is causing this decline, but habitat loss and the use of neonicotinoids are suspected. Neonicotinoids are a new class of insecticides that are toxic to insects, including bees and butterflies, yet still have been allowed exponential growth in the United States since 2003. They are now the most widely used insecticides in the world; farmers use them on hundreds of field crops. Studies have shown that neonicotinoids affect birds that feed on crop seeds. Eating just one or two treated seeds causes developmental problems and affected birds’ ability to reproduce. Eating even one neonicotinoid-treated corn kernel can be lethal to a jay-sized bird.

Beginning in July, nonagricultural uses of neonicotinoids will be restricted in Massachusetts. Homeowners without a pesticide license will not able to buy or apply them to outdoor properties including lawns, trees, shrubs, ornamental plants, or vegetable or flower gardens. Maryland, Connecticut and Vermont also limit its consumer use. But unlike in Canada and the European Union, where almost all uses of neonicotinoids are banned, it is expected that late this year the Environmental Protection Agency will affirm a plan that permits the continued use of four neonicotinoids on farmland for the next 15 years. Since 56 percent of U.S. corn, soybean, wheat and cotton crops are treated with neonicotinoids, we still have a long way to go to protect our vulnerable bird (and insect) populations. 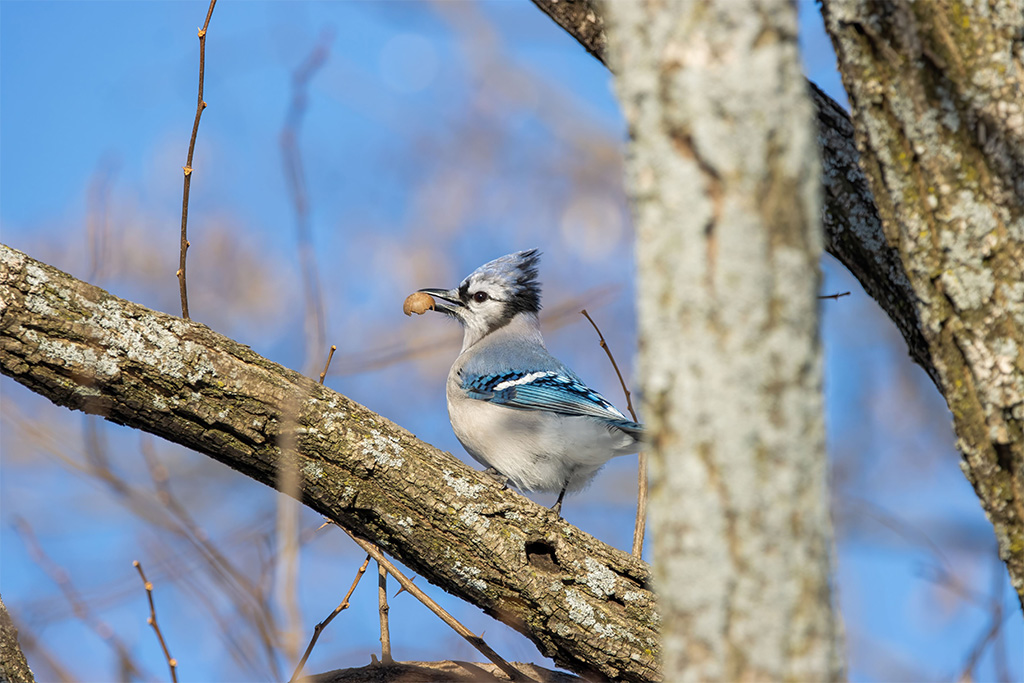 Blue jays raise their crests when excited or agitated. This jay surveys the landscape in Huron Village in January. (Photo: Richard George)