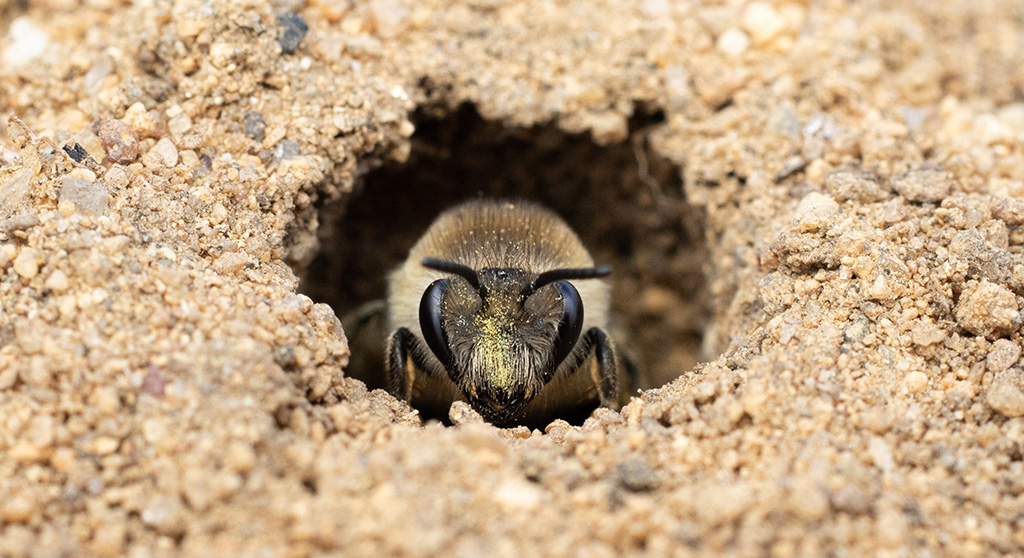 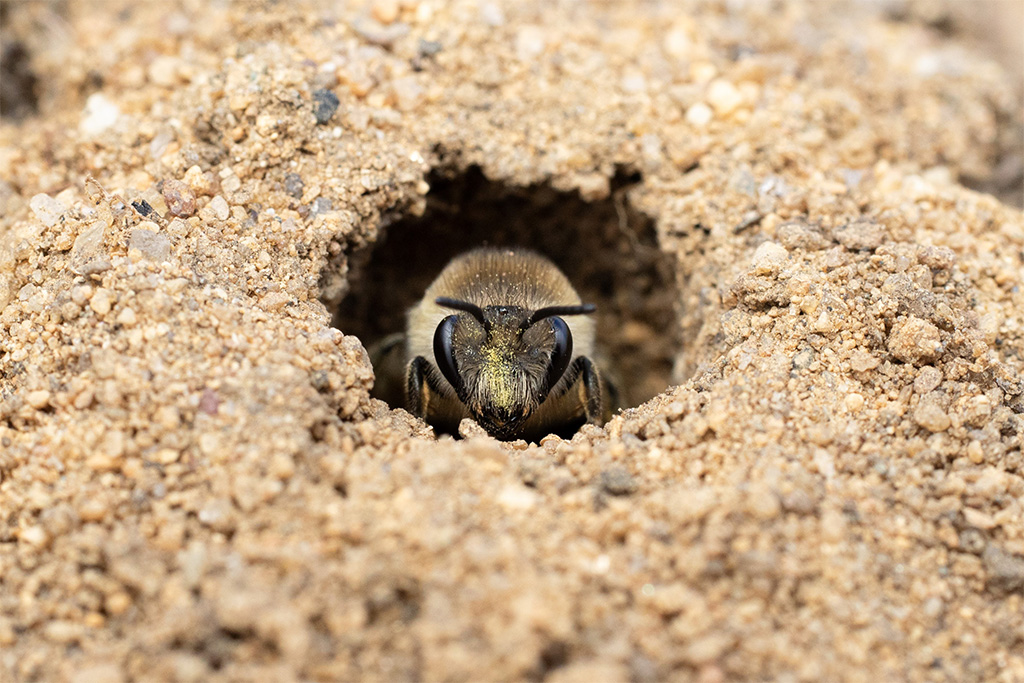 Some say April is the cruelest month, but for cellophane bees, April is the most precious. Unequal cellophane bees (Colletes inaequalis) are one of the first bees to emerge each spring (getting sustenance from, and in the process pollinating, those early blossoming spring trees). They stick around only through the end of April or early May, by which time the adults have all died. You are most likely to spot these solitary bees on sunny days in sandy areas. Solitary bees do not live in hives or make honey. About 75 percent of bees are solitary.

Each spring, on the first warm sunny day in March or April, cellophane bee males dig out from underground, feed on nectar from early blossoms and fly around just above the surface, waiting for females to emerge. When a female appears, several males swarm around her, until one male successfully mates. After mating, males’ most important work is done, and they live their final days sipping nectar from newly opened blossoms.

A video by the author of cellophane bee males tussling to mate with a female:

The female bee then prepares her nest. She tunnels into sandy soil, digging a central shaft with a few offshoots to hold her eggs. Every night, she prepares an egg chamber (cell) at the end of an offshoot. She mixes saliva with a secretion from an abdominal gland and spreads this mixture over the chamber’s walls using her brushlike tongue. The mixture forms a waterproof film that can last for several years. The female bee has made what looks like a miniature plastic sandwich bag for her egg; hence the name cellophane bee. (Scientists are studying this substance as a plastic substitute because it decomposes within five years.)

Every day, the female bee puts food in the cell she created overnight. She drinks nectar and presses pollen from her favorite trees (red maple, redbud, serviceberry, apple) onto her fuzzy leg hairs. She returns to the chamber, scrapes off the pollen, regurgitates the nectar, and mixes the two into a nutritious liquid “soup” in the bottom of the cell. She does this several times until she has provided enough pollen soup for one offspring. Then she deposits an egg on the wall or ceiling of the cell and closes the cell by folding over a flap, like on a sandwich bag. The bee fills in the entrance to the cell, then digs another cell. 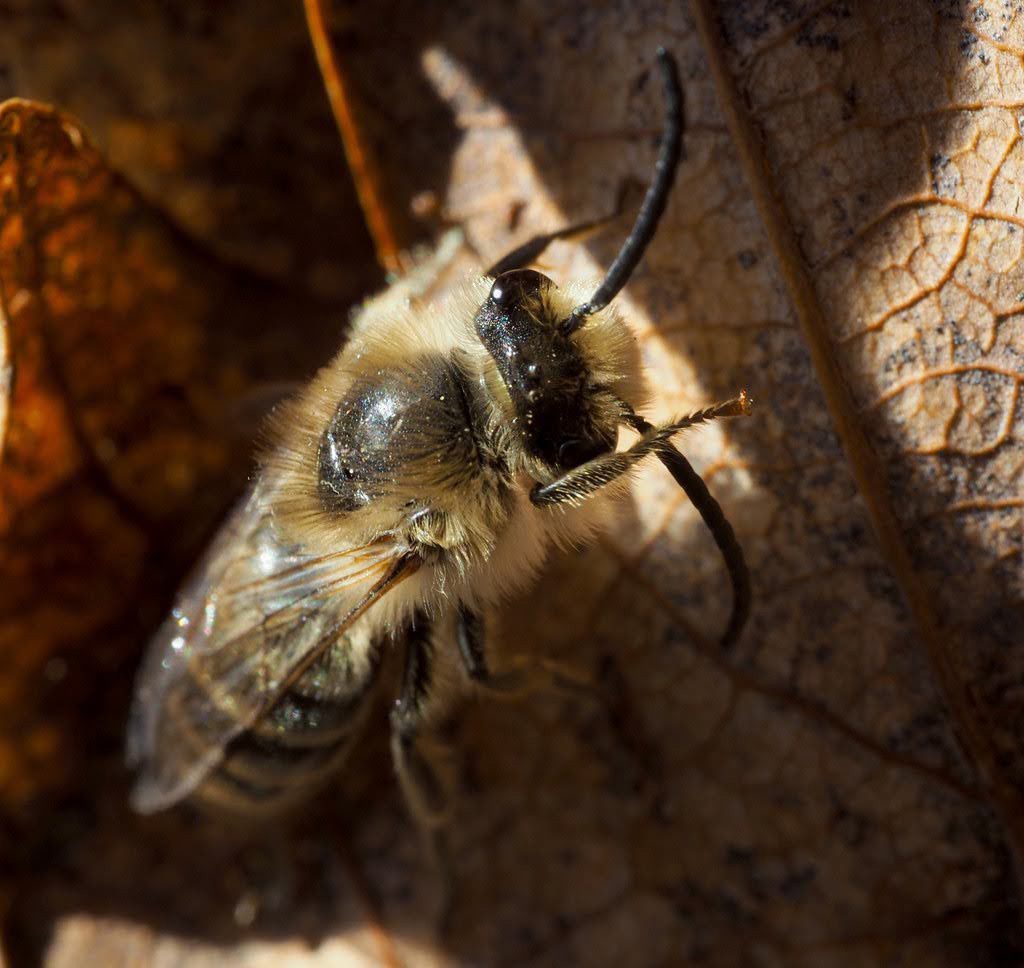 Over the next week or more, this solitary female bee provisions five to seven cells, depositing one egg in each. Then she fills in the nest’s central shaft with dirt or sand. With a little luck, the nest will remain undisturbed until the following April when new bees will emerge. If trees are still blooming, the female may start a second nest.

In a few hours to a day, each egg hatches and the grublike larvae fall into the pollen soup below, where they float and grow, insulated from moisture in the ground by the waterproof cellophane lining. In the fall, the larvae metamorphose into adult bees. Cellophane bees, like other bees that emerge in the spring, overwinter underground as adults. Then, when the first warm days of spring arrive, the fully-formed adults emerge (sometimes when there is still snow on the ground). 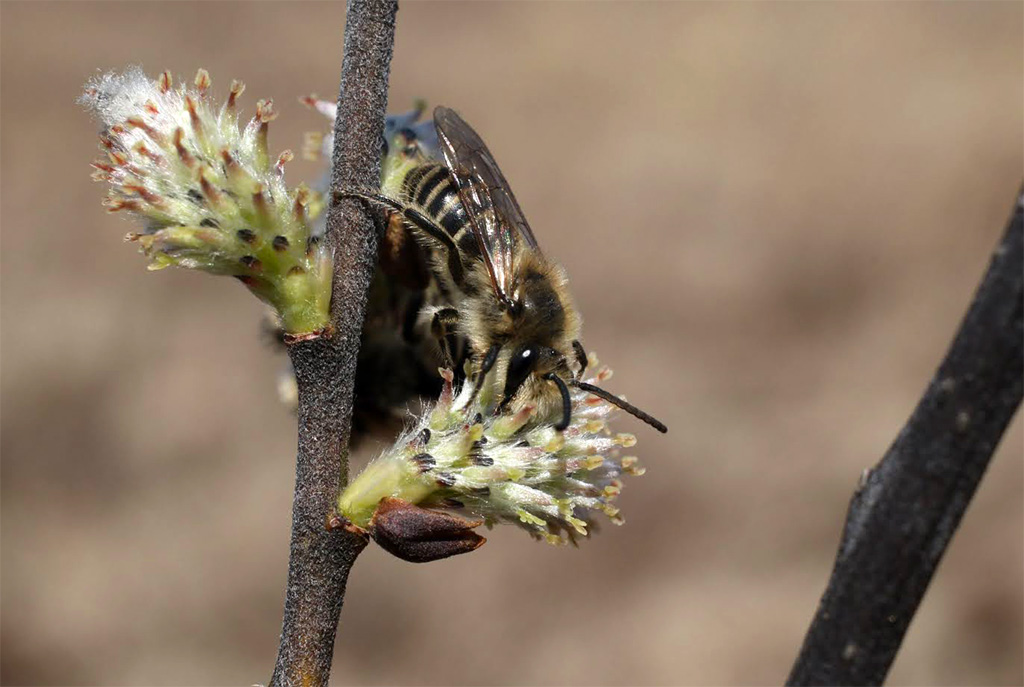 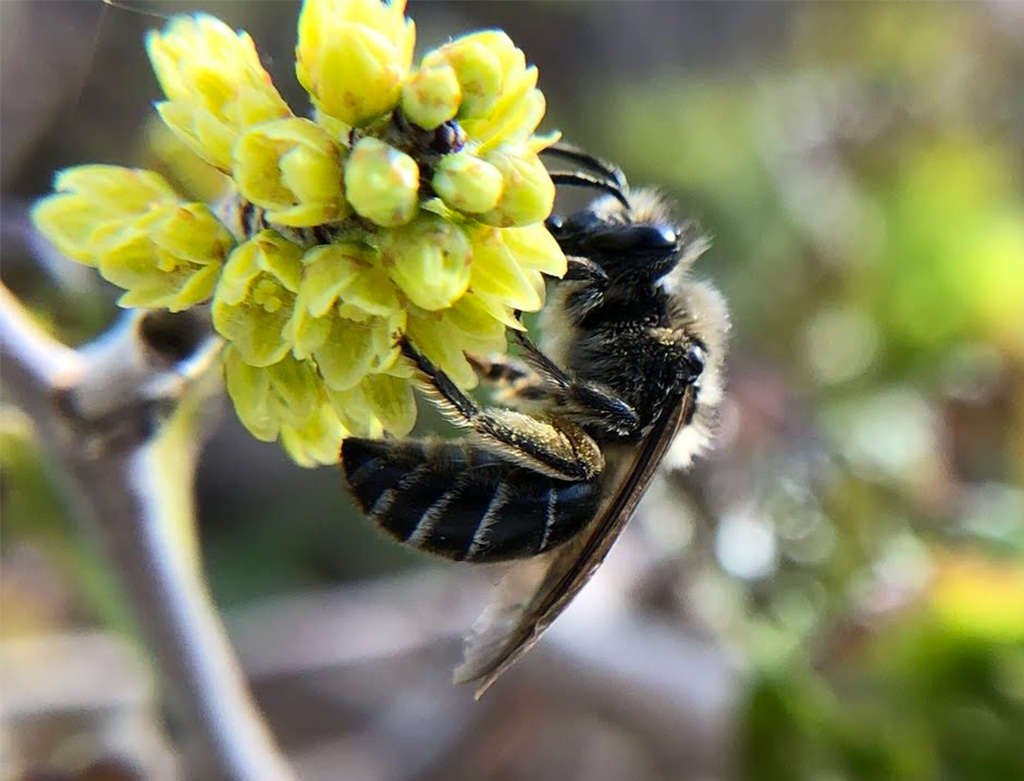 Cellophane bee females pack pollen onto their legs to bring back to their nests. (Photo: scolop98) 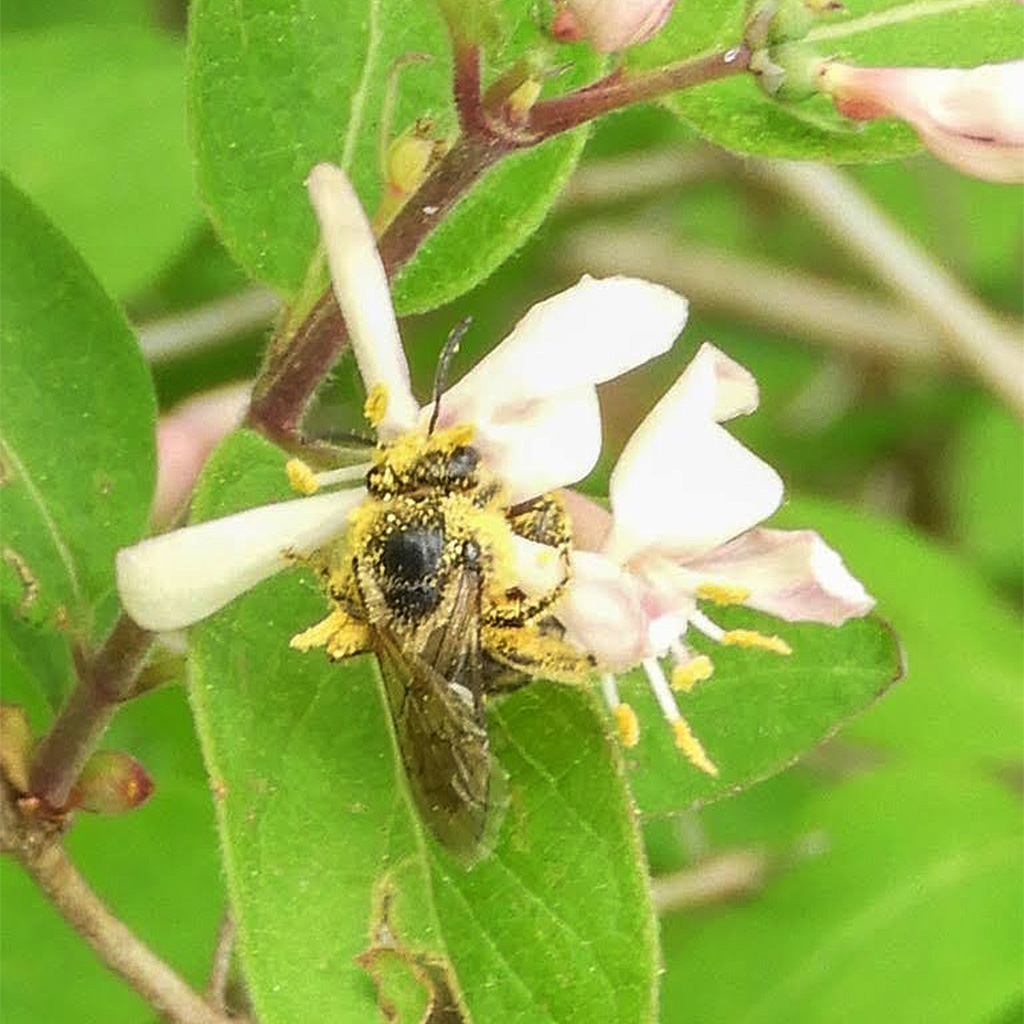 Although cellophane bees are solitary, they often nest in large clusters. These bees are not aggressive and, unless you step on a female with bare feet or sit on one, it will not sting you. Males don’t sting at all. The females are so preoccupied building their nests and laying their eggs that the last thing they want to do is to waste time stinging you, which would interfere with their time-sensitive nesting plans. So if you see these peaceful bees darting around below your ankles in a sandy area, let them be. In only a few short weeks, the adults will all be dead, and the new generation will be safely ensconced underground, biding their time until it is right for them to emerge the following spring.

Now is the time of the year to look for unequal cellophane bees. Their nests look much like anthills, except the holes are larger – about the thickness of a pencil. Surrounding each hill is a small mound of sand that the bee has pushed out while digging the tunnels. If you look closely, you might see a female bee peering out from a hole, guarding her nest from intruders. 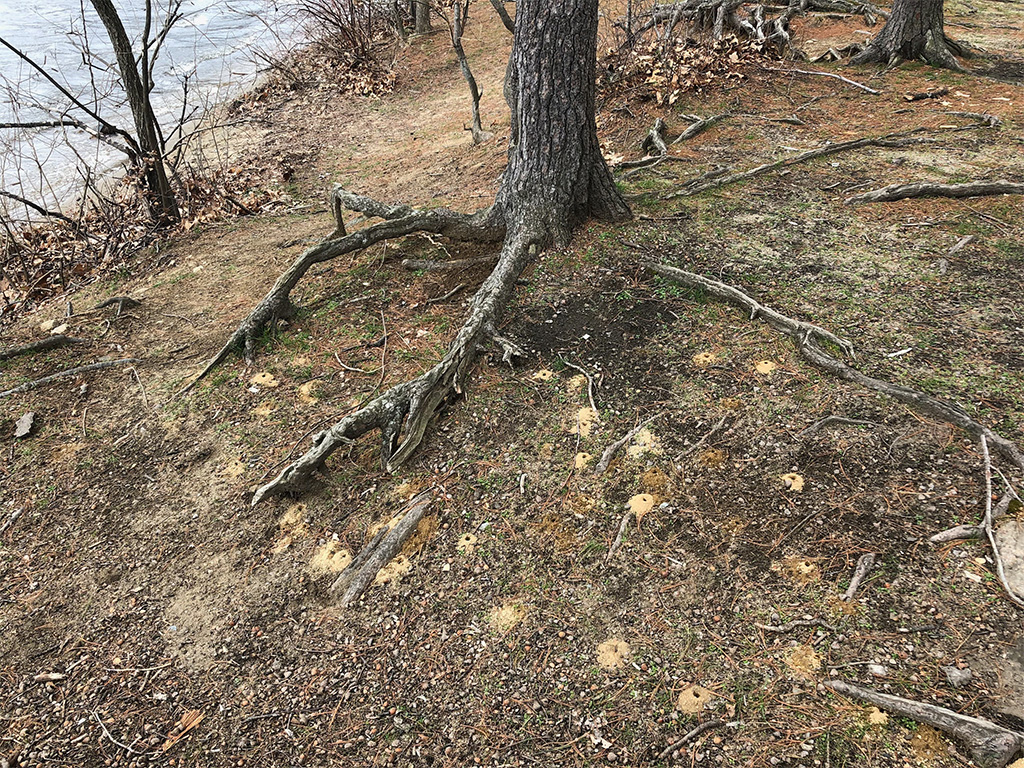 Cellophane bees (males and females) nest near each other in large groups. (Photo: Nick Dorian)

If you would like to go on a cellophane bee safari, join Nick Dorian of the Tufts Pollinator Initiative at the Upper Mystic Lake on April 9. Dorian’s enthusiastic talks are great fun, and he has a short video about the life of cellophane bees.

There are more than 3,600 species of bees in North America. Native bees are the most important pollinators of our flowering plants, pollinating 80 percent of them! Many native bees, such as cellophane bees, have extremely specific functions. More than half of North America’s native bee species are in decline, and one-fourth are at risk of extinction. Maintaining undisturbed natural areas and limiting pesticide use can help our native bee populations. Since bees get most of their nectar from trees – one tree provides hundreds to thousands of blossoms – planting native trees is crucially important. Most native bees are solitary, such as cellophane bees, and 70 percent live underground. Leaving undisturbed areas in your yard or garden can also help these bees survive. 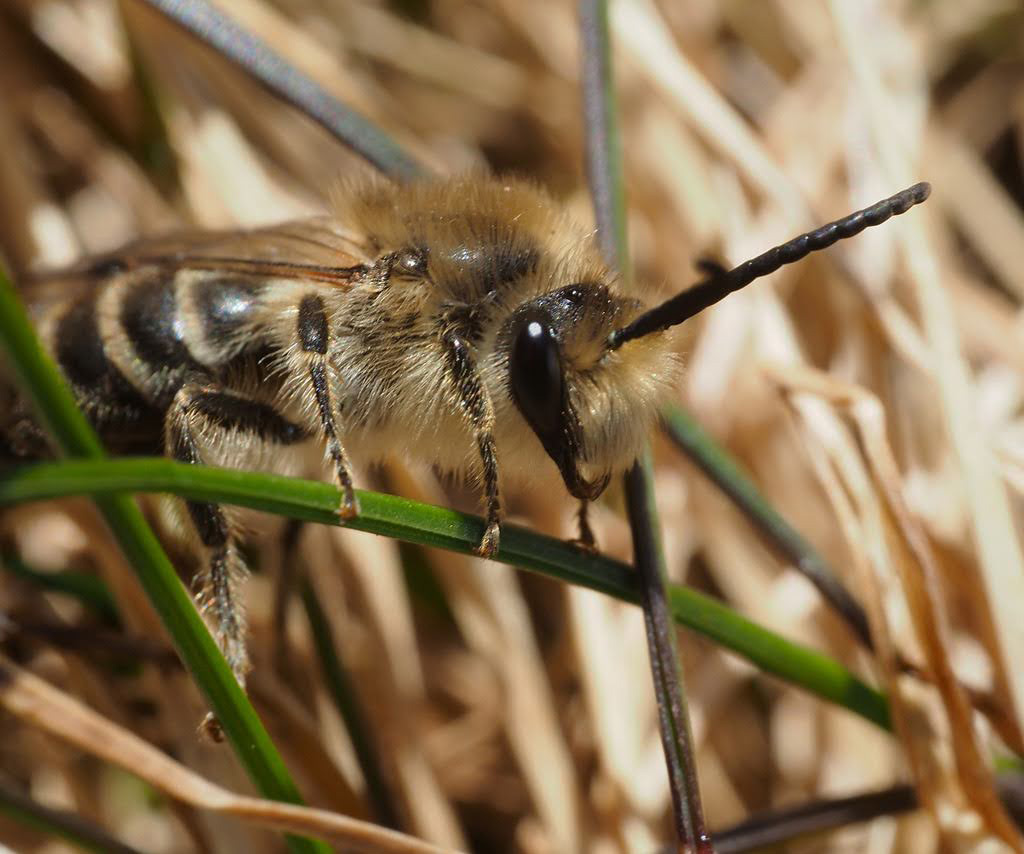 Cellophane bees usually live and die within 500 feet of where they emerge. (Photo: Norm Levey)