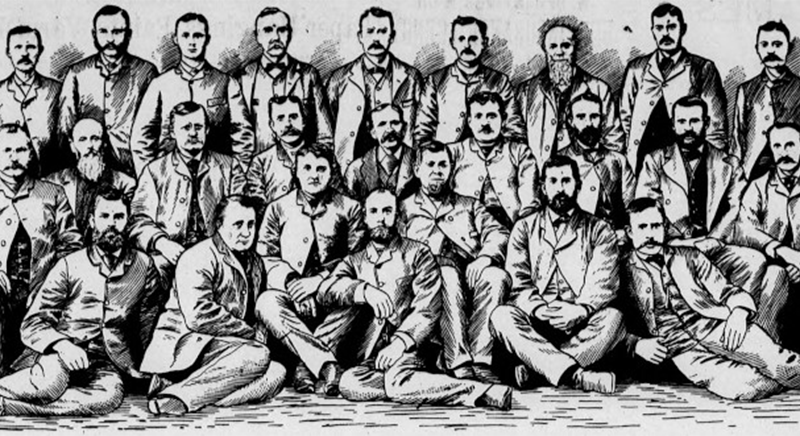 Members of the Cambridge Railroadmen’s Union who went on strike in 1887 in an image taken from The Cambridge Tribune.

A violent confrontation broke out May 4, 1886, between police and labor protesters at the McCormack Harvesting Machine Co. in Chicago. The previous day, one person had been killed and several more injured when police tried to intervene during a strike by McCormack workers seeking an eight-hour workday. In response, a group of labor leaders called a mass meeting in the city’s Haymarket Square that, although peaceful for much of the day, turned violent toward evening when an unidentified person threw a bomb into the crowd and police responded with gunfire. In all, more than a dozen police and protesters were killed and another hundred injured.

In the wake of the Haymarket Affair and the trial of the so-called “Chicago Eight” – a group of anarchist labor leaders convicted of conspiring with the unknown assailant – Americans channeled their fears about industrialization, urbanization, lawlessness and violence into rhetoric and political action against labor activists, particularly those born outside the United States. Much of the public blamed immigrants, particularly those from Southern and Eastern Europe, for infusing the struggle for workers’ rights with anarchy and a desire for (or at least an indifference to) bloodshed. As Americans commemorated the anniversary of the May 4 riots and, later, of May 1 as International Workers’ Day, their attitudes toward the working class and labor leaders illustrated their conflicting views on the value of work and the need for worker protections. Cantabrigians, like their counterparts throughout the nation, expressed a similar ambivalence to the workers in their midst.

In its coverage of the Haymarket Affair, The Cambridge Chronicle made sure to emphasize that the protesters killed and wounded were “socialists” and remarked that “curious facts of race appear in the Chicago events … [the names of the casualties] are not those of native Americans, but of Bohemians, Poles, Hungarians and Germans.” The author goes on to note that “the fearless policemen who were killed and wounded in trying to disperse the rioters were, at most, without exception, Irish. England fancies that Irishman is only another name for lawlessness, but in the United States they are on the side of the law.” Just a few decades earlier, Irish immigrants seeking refuge from the Potato Famine in Cambridge and nearby cities were maligned as lazy, ignorant drunkards prone to violence. But by the 1880s they were portrayed as ideal immigrants, especially in contrast to the growing influx of migrants from countries whose own struggles for workers’ rights had turned violent.

Over the next several decades, workers in Cambridge used the anniversary of the Haymarket Affair and the commemoration of International Workers’ Day to hold lectures and conferences on labor rights and to engage in strikes and work stoppages in many of the city’s industries. Although there were no large-scale violent protests on the scale of Haymarket, the fear of violence and of the “socialist influence” is evident in much of the newspaper coverage of labor disputes. In response to these fears, many of the city’s labor unions, including the Cambridge Central Labor Union and the local branches of the American Federation of Labor, deliberately asserted their commitment to peaceful patriotism even as they continued to advocate for limits on working hours and improved working conditions.

By the time of America’s entry into World War I in 1917, the city’s workers were enjoying an elevated status in the view of the public; as munitions work and domestic war production became seen as vital to victory overseas, public perception of the working class shifted from suspicion to appreciation. Through their involvement in the war effort, workers from many different ethnic backgrounds and nationalities could assert their patriotism and join forces in supporting America and its allies abroad. In the years following the war, conditions improved significantly for Cambridge workers in many sectors, but the annual labor commemorations of early May continued for much of the 20th century. To learn more about the connections between immigration and industry in Cambridge, we invite you to join History Cambridge for our upcoming History Café, “Changing Tides in Cambridge Industry,” on May 23.