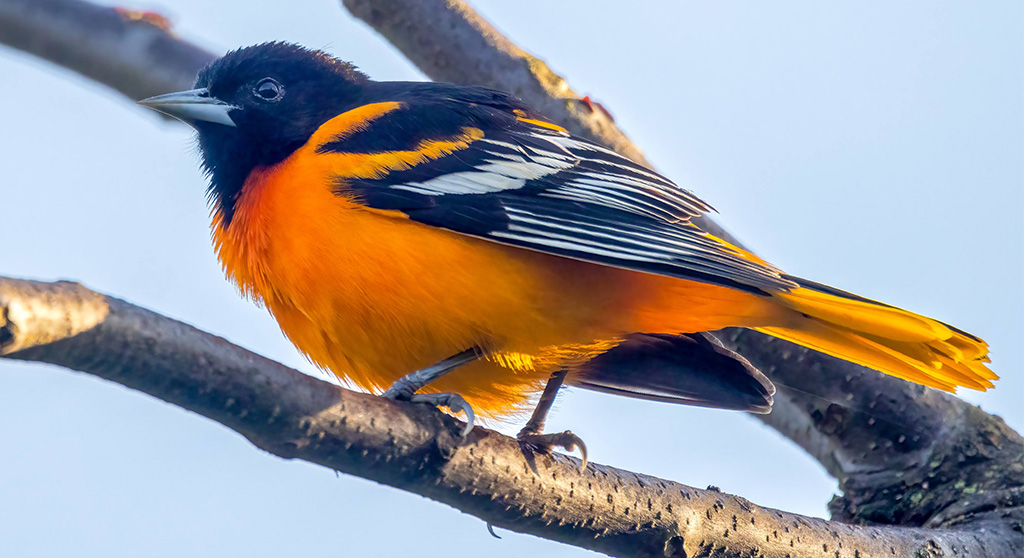 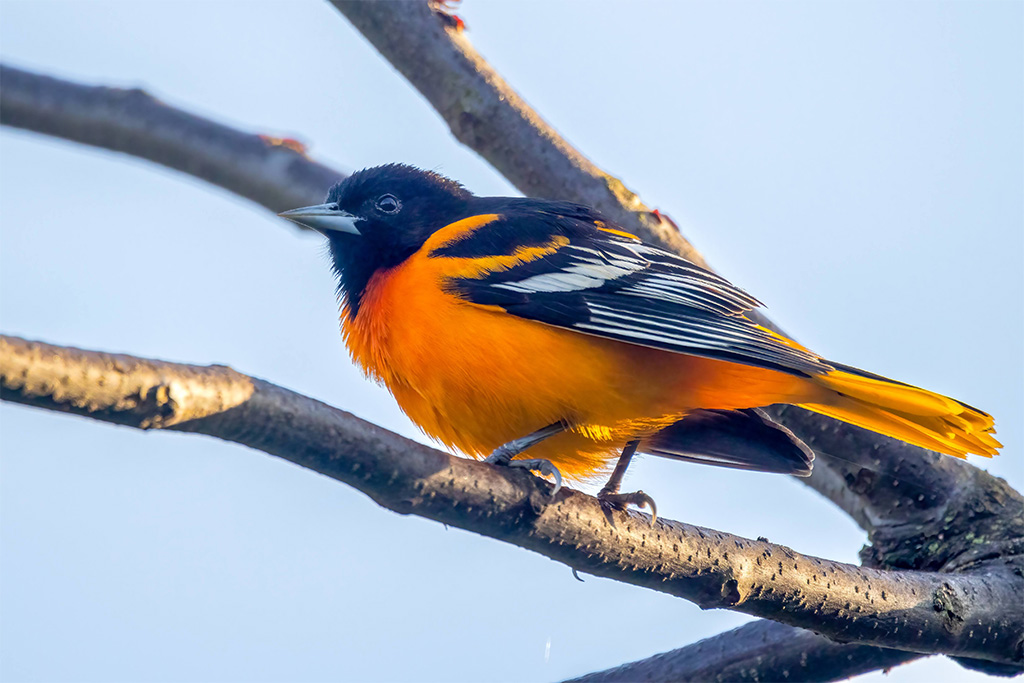 The Baltimore oriole (Icterus baltimore) is a migratory bird of the blackbird family that has been considered a harbinger of spring since Colonial days. This bird gets its name from Lord Baltimore, who in the 1600s governed the colony of Maryland for 42 years. His yellow-and-black coat of arms reminded people of the yellow-and-black feathers of this bird, which became known as the Baltimore oriole. The term oriole is from the Latin for “golden.”

Baltimore orioles have just arrived in our region within the past week or two. 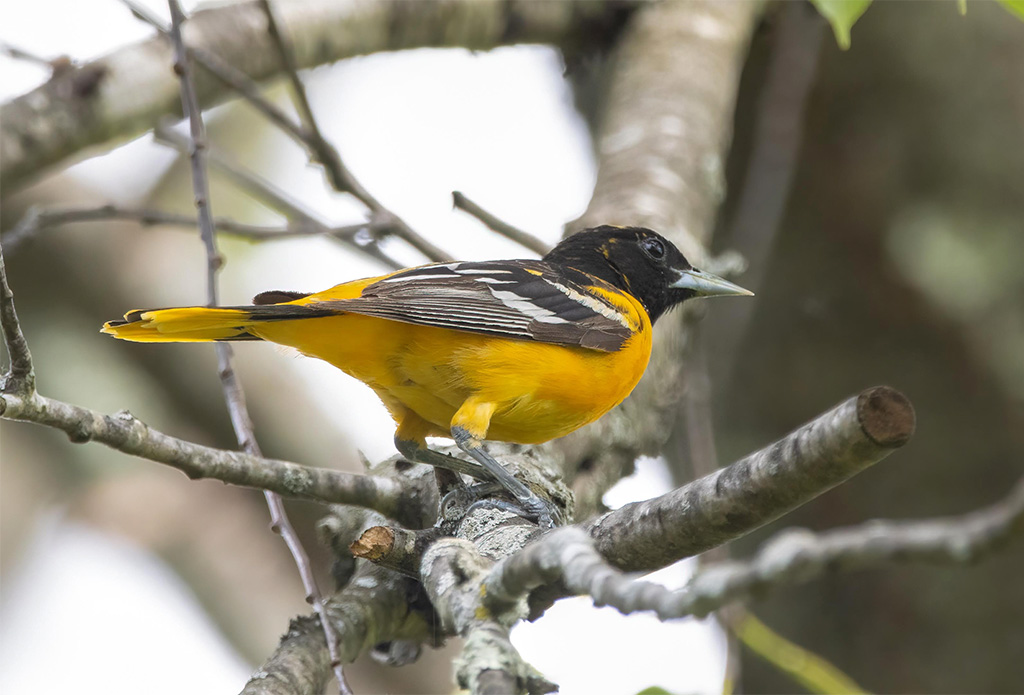 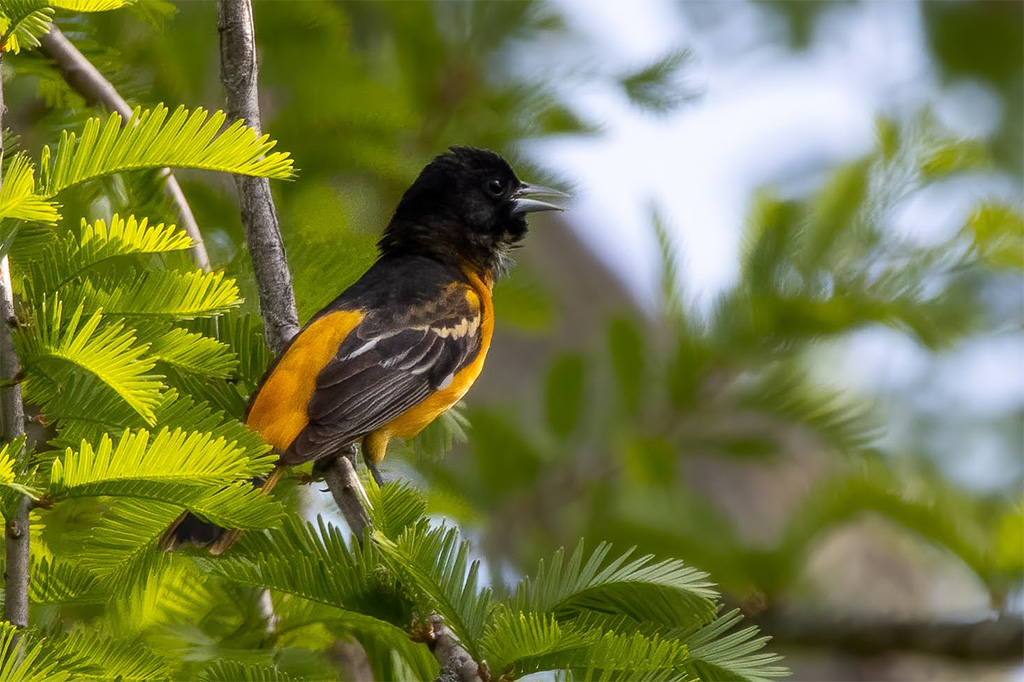 Male orioles have one white bar on their wings. (Photo: Richard George) 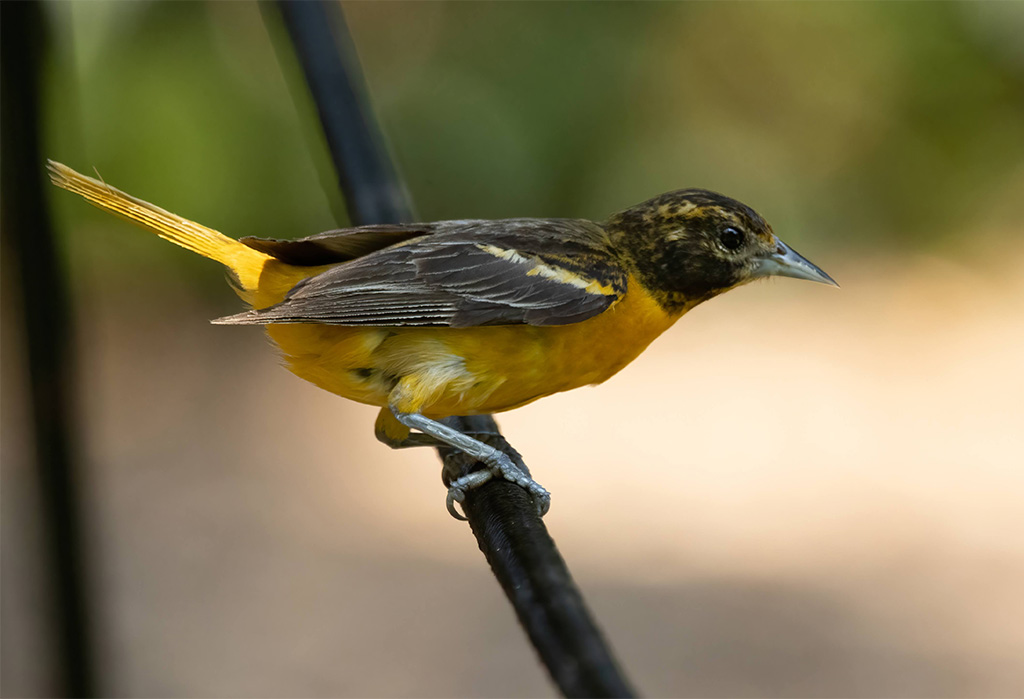 You can spot them up high in leafy trees. They are slightly smaller than a robin. Adults have one or two white bars on their wings. The male is orange and black. The female is yellowish and black. Juveniles look much like the female.

In the winter, Baltimore orioles migrate south to South America, Central America or Mexico. During the spring, they migrate north to our area and beyond to Canada. After arriving in our area in spring, the males establish a territory and sing and hop to court females. The male and female may fan their tail feathers during courting behavior. 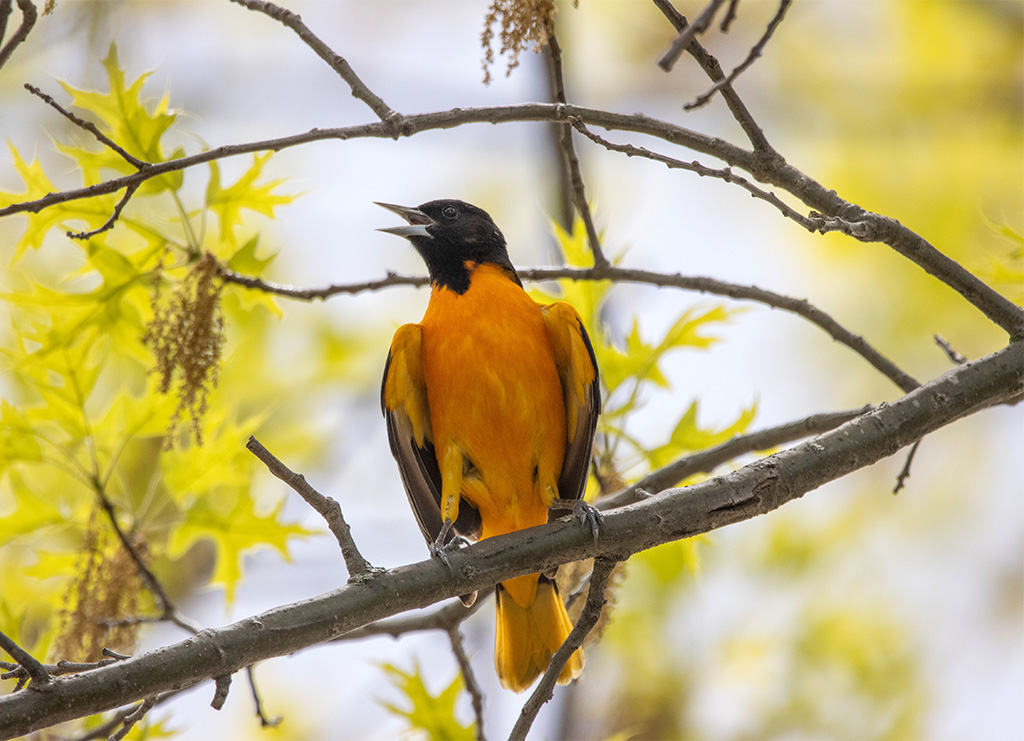 Baltimore orioles have sharply pointed bills, a characteristic of the blackbird family, of which they are members. (Photo: Richard George)

Once paired, the female weaves a nest about 25 feet aboveground. It is a bag-shaped pouch suspended from the end of a tree branch of plant fibers, strips of bark, vines, grass, yarn, string and hair. John James Audubon described the nest-making process this way:

[The male oriole] flies to the ground, searches for the longest and driest filaments … and whenever he finds one fit for his purpose, ascends to the favourite spot where the nest is to be, uttering all the while a continued chirrup … No sooner does he reach the branches, than with bill and claws, he fastens one end to a twig, with as much art as a sailor might do, and takes up the other end, which he secures also, but to another twig a few inches off, leaving the thread floating in the air like a swing, the curve of which is perhaps seven or eight inches from the twigs. The female comes to his assistance with another filament of moss, or perhaps some cotton thread, or other fibrous substance, inspects the work which her mate has done, and immediately commences her operations, placing each thread in a contrary direction to those arranged by her lordly mate, and making the whole cross and recross, so as to form an irregular network … The nest has now been woven from the bottom to the top, and so secured that no tempest can carry it off without breaking the branch to which it is suspended.

Dutch elm disease, which peaked in the United States in the 1970s, destroyed many favored oriole nesting sites, so the population has declined more than 1.5 percent per year from 1966 through 2015. Besides elm trees, these orioles build nests in cottonwoods, maples, willows and apple trees. 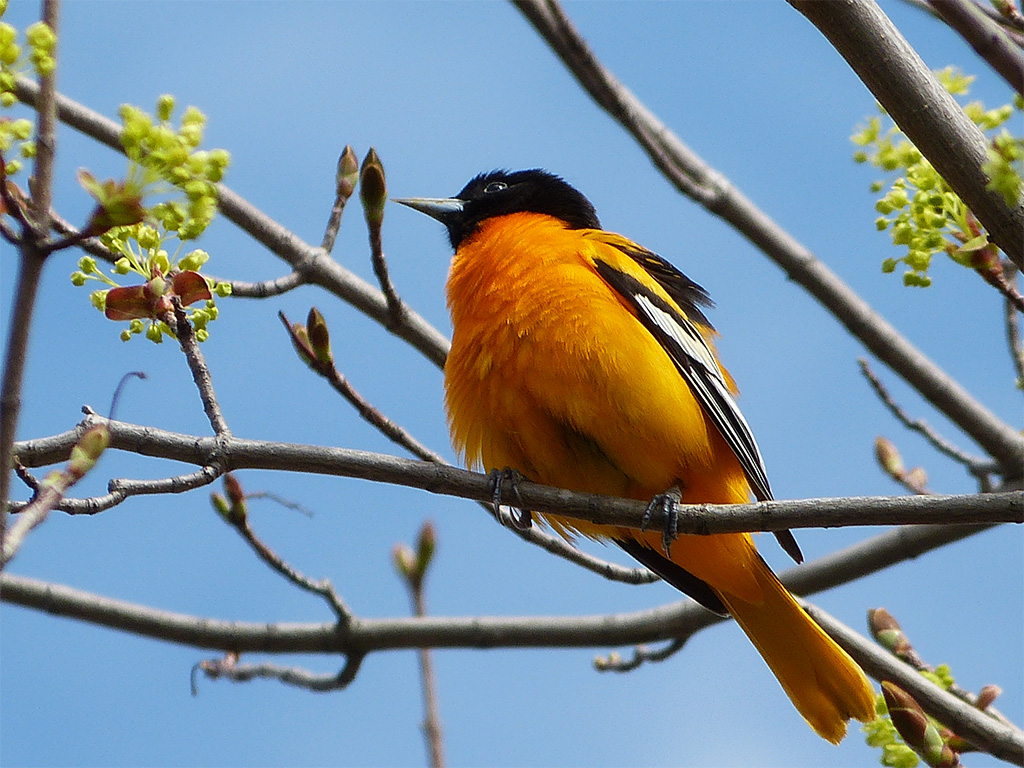 A Baltimore oriole surveys the scene at Fresh Pond. These orioles display adult plumage by the fall of their second year. (Photo: Brian Rusnica)

The female lays about four eggs, which take two weeks to hatch. The parents feed the youngsters by regurgitating food. According to Audubon, “A day or two before the young are quite able to leave the nest, they often cling to the outside, and creep in and out of it like young Woodpeckers. After leaving the nest, they follow the parents for nearly a fortnight, and are fed by them.”

Baltimore orioles have many predators, including other birds such as grackles, crows, blue jays, screech owls and hawks. Squirrels and cats also prey on orioles. During spring, the Baltimore oriole eats mainly insects, which it searches for among the leaves and branches of trees. One of their favorite foods is the hairy tent caterpillar, which most other birds shun because of the bristly hairs. But orioles have devised a strategy for defeating this defense: They beat the caterpillars against a branch until their prickly hairs are removed, then eat them. They also eat beetles, grasshoppers, wasps and spiders. According to Audubon, “As soon as the mulberries and figs become ripe, they resort to these fruits, and are equally fond of sweet cherries, strawberries, and others.” Baltimore orioles will also drink nectar from hummingbird feeders. 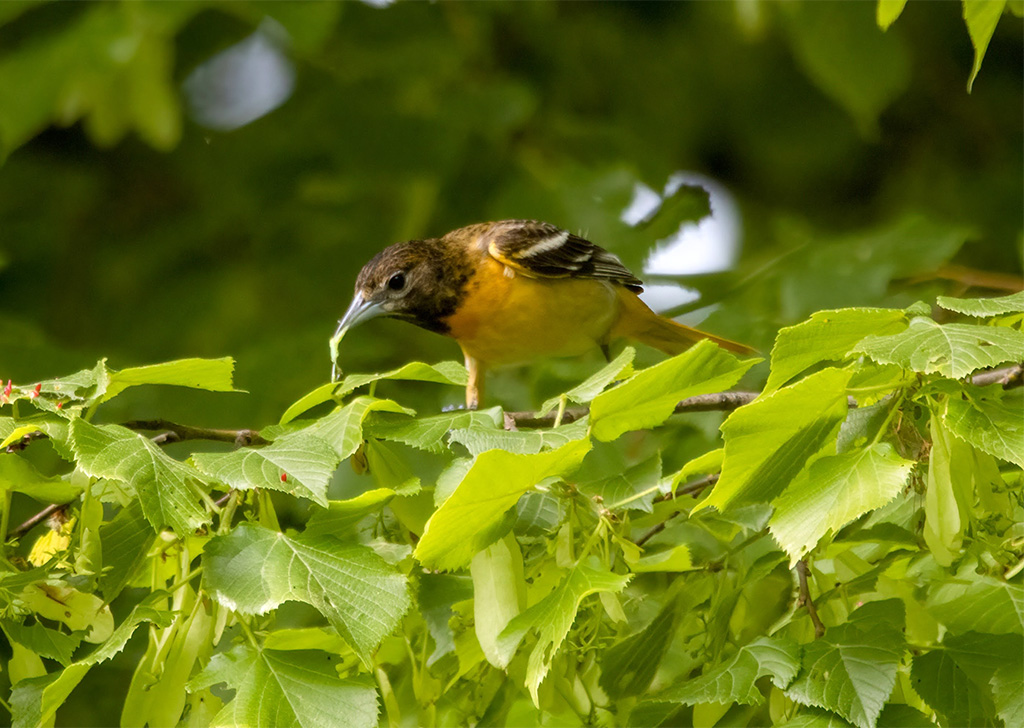 A Baltimore oriole in West Cambridge’s Coolidge Hill searches for insects. These orioles eat insects and fruit, but not birdseed. (Photo: Richard George)

Baltimore orioles prefer dark-colored fruit, such as mulberries and purple grapes. To eat fruit, they stab their pointy bill into a fruit and open their mouth, making a channel, then drink the juice from the channel with their tongue. Baltimore orioles may lead their young to well-maintained bird feeders, where they especially like halved oranges, grape jelly or orange marmalade and berries.

Though the number of Baltimore orioles is slowly declining, they are still common and a delight to behold during the spring and summer in Massachusetts. 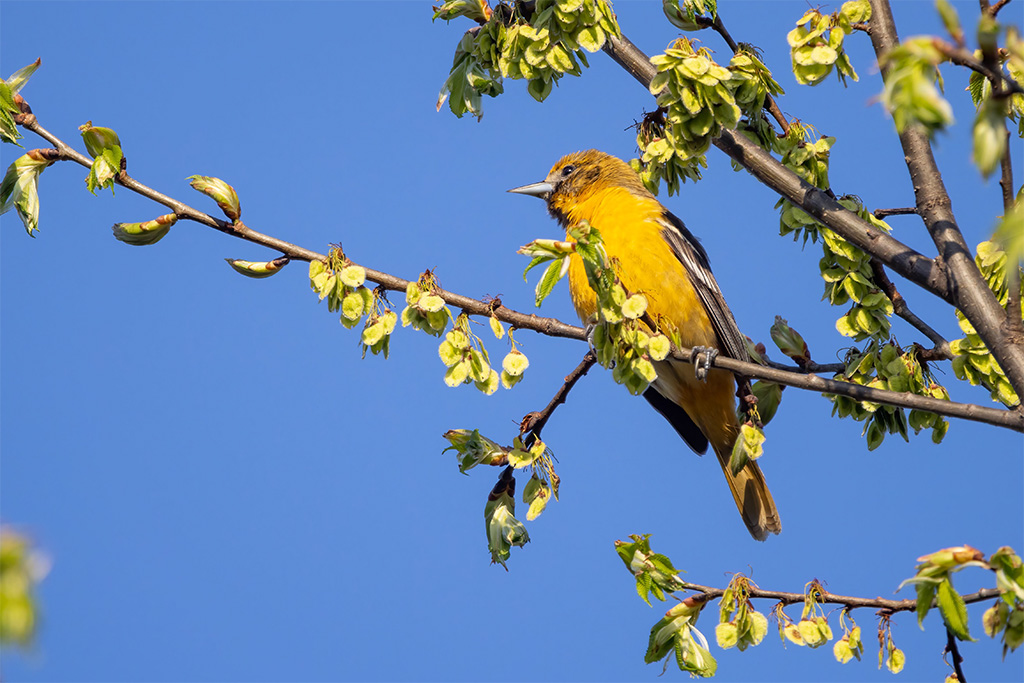