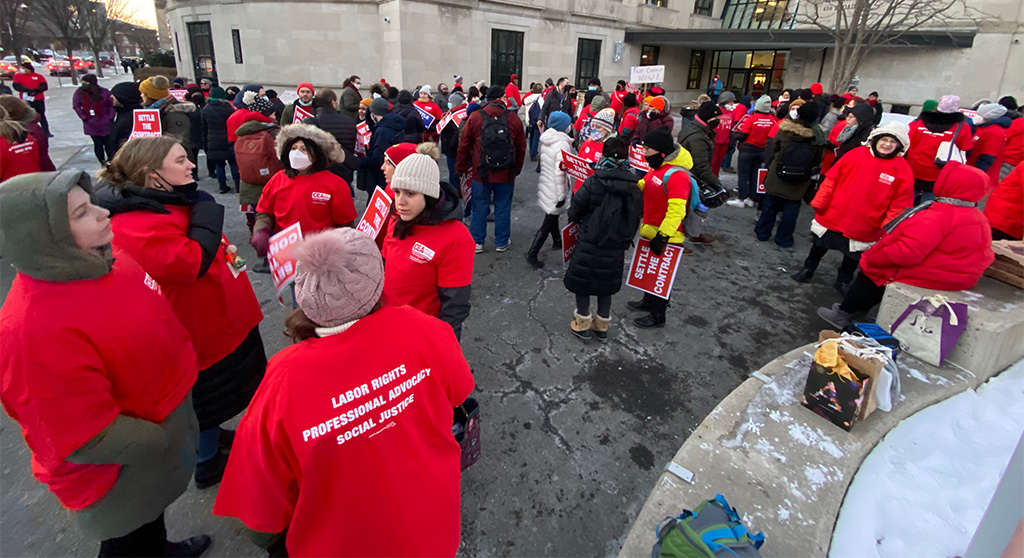 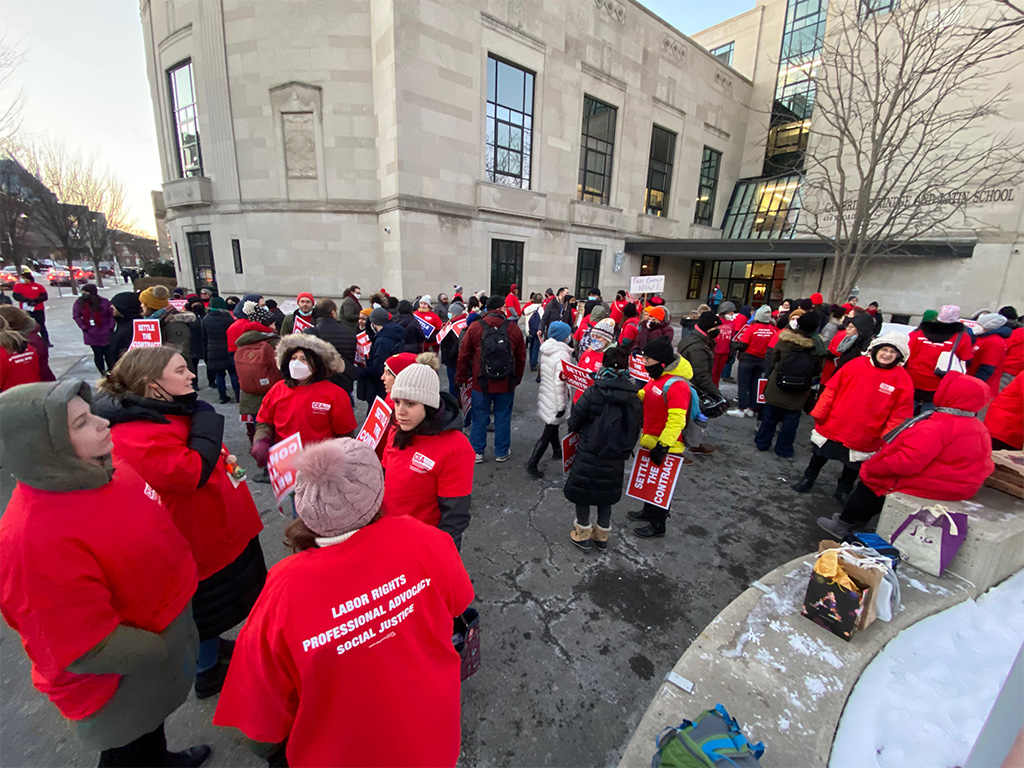 Teachers gather at a Feb. 15 educators’ union protest at Cambridge Rindge and Latin School, in front of where the School Committee meets. (Photo: Marc Levy)

After months of stalled negotiations, the Cambridge Public School District and Cambridge Education Association have agreed to a contract for teachers, assistant principals, deans and curriculum coordinators. The roughly 1,100 educators in units A and B were working under a one-year contract that ended Aug. 31.

Association members reviewed the tentative agreement beginning on Monday and the decision to ratify was announced Wednesday evening. The School Committee approved the agreement at a special meeting at noon Thursday.

“This is a solid agreement,” union president Dan Monahan said in remarks to the committee Thursday. It will feel good to have this agreement behind us – we have been negotiating for over two years.”

Though negotiations – which began before the Covid pandemic – were at first “extremely tumultuous,” Monahan said, “the last two months have been highly productive. We believe this to be a result of the School Committee’s shift from a lawyer-centric legalistic approach to educator/scholar-centric engagement where we have had good back-and-forth on educational issues that have led us to a positive result.”

“Honestly, this is a much better approach to negotiations than any I have seen from the School Committee in all of my years of negotiating,” Monahan said.

Teacher salaries, parental leave, additional time for engaging with families and professional development and mandatory training, as well as aligning educator evaluations with state expectations are highlighted in a joint letter signed by Mayor Sumbul Siddiqui in her role as School Committee chair and district superintendent Victoria Greer.

A retroactive cost of living increase will raise teachers’ salaries on average by $6,642, a 7.3 percent increase – better than initial district offers. Eligible members may take up to eight weeks of paid parental leave when a child is born, adopted or welcomed as a foster child.

Teachers will also have additional time to reach out to discuss student progress with families via phone calls, in-person meetings or home visits. Proposals that most alarmed some members of the public, about the district’s ability to reassign educators or add responsibilities, disappeared over the course of negotiations, union president Dan Monahan said.

The contract adds three days of professional development when students will not have school: Election Day, the first weekday after winter break and an additional day that will be announced when the calendar is released in August.

Educators will also get mandatory training on “anti-bias, anti-racism and racial equity; deescalation techniques and collaborative problem-solving; and based on their role, physical restraint training,” according to the joint letter. The training was wanted by educators.

One of the sticking points was the duration of the contract, with the district wanting a one-year contract so it could align staffing to a new district plan and the union wanting the stability of a three-year contract.

Both parties got some of what they wanted; with the two-year contract in effect until August 2023, there’s a short reprieve before they’re back at the table.

“The tentative agreement described above is only a two-year agreement,“ the CEA said in its June 21 email. “We need to be back at the negotiating table next October.”

But in his Thursday remarks, Monahan added that “the recent history of this process gives me hope that those negotiations will go well.”