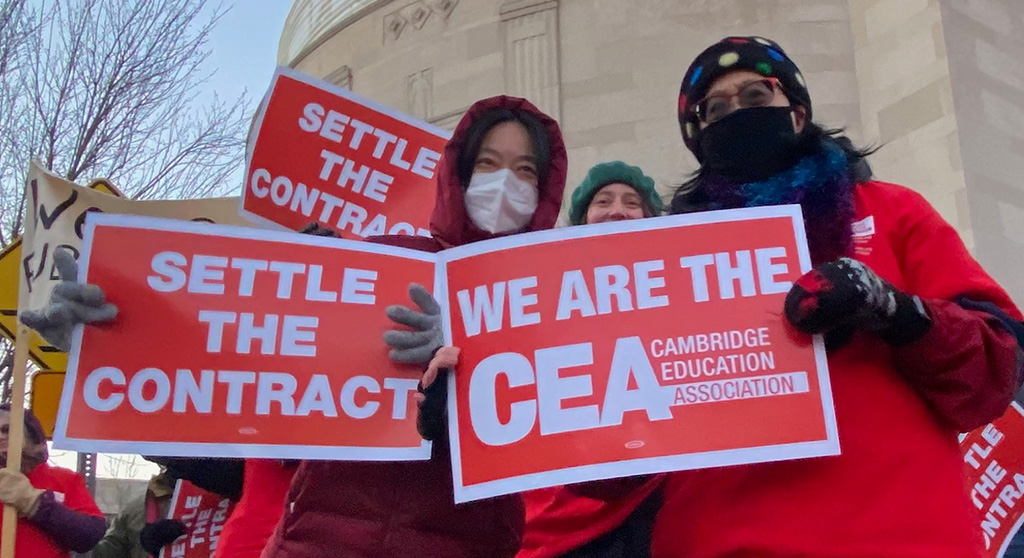 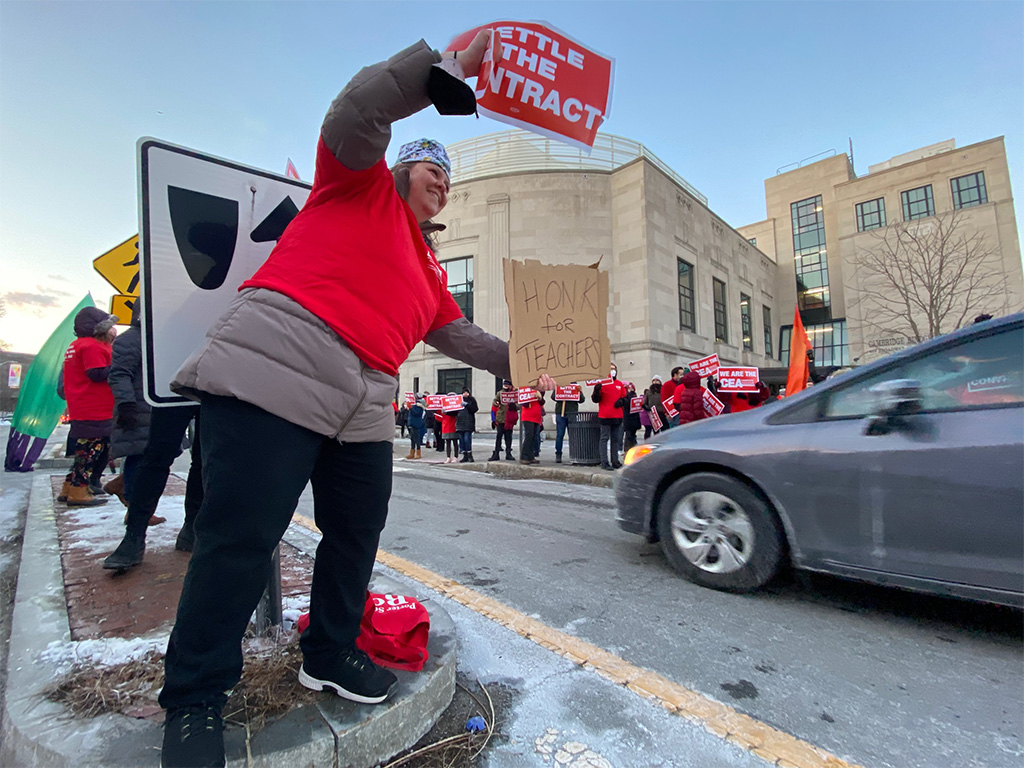 The Cambridge Education Association moved stalled contract negotiations with Cambridge Public Schools out from behind closed doors and into the court of public opinion this week via letters and social media and by demonstrating outside the building where the School Committee meets.

The union and the district are negotiating a successor contract for teachers and the unit that includes assistant principals, deans and curriculum coordinators. All are working under a one-year contract that ended Aug. 31.

Monday saw the first salvo as union president Dan Monahan sent a letter urging the School Committee “to end its stalling tactics and to bargain in earnest” on a three-year contract for 1,100 educators.

“Like educators across the country, members of the CEA have never worked harder to meet our scholars’ needs as we contend with the impact of the Covid-19 pandemic and the urgent need to address systemic racism embedded in society. It is demoralizing when the School Committee will not even consider our proposals, such as those around professional development and antiracism, which are aimed at making Cambridge Public Schools better places to teach and to learn,” Monahan wrote. “We are prepared to work with the School Committee on a contract that supports the mission of nurturing the academic, social and emotional growth of our students.” 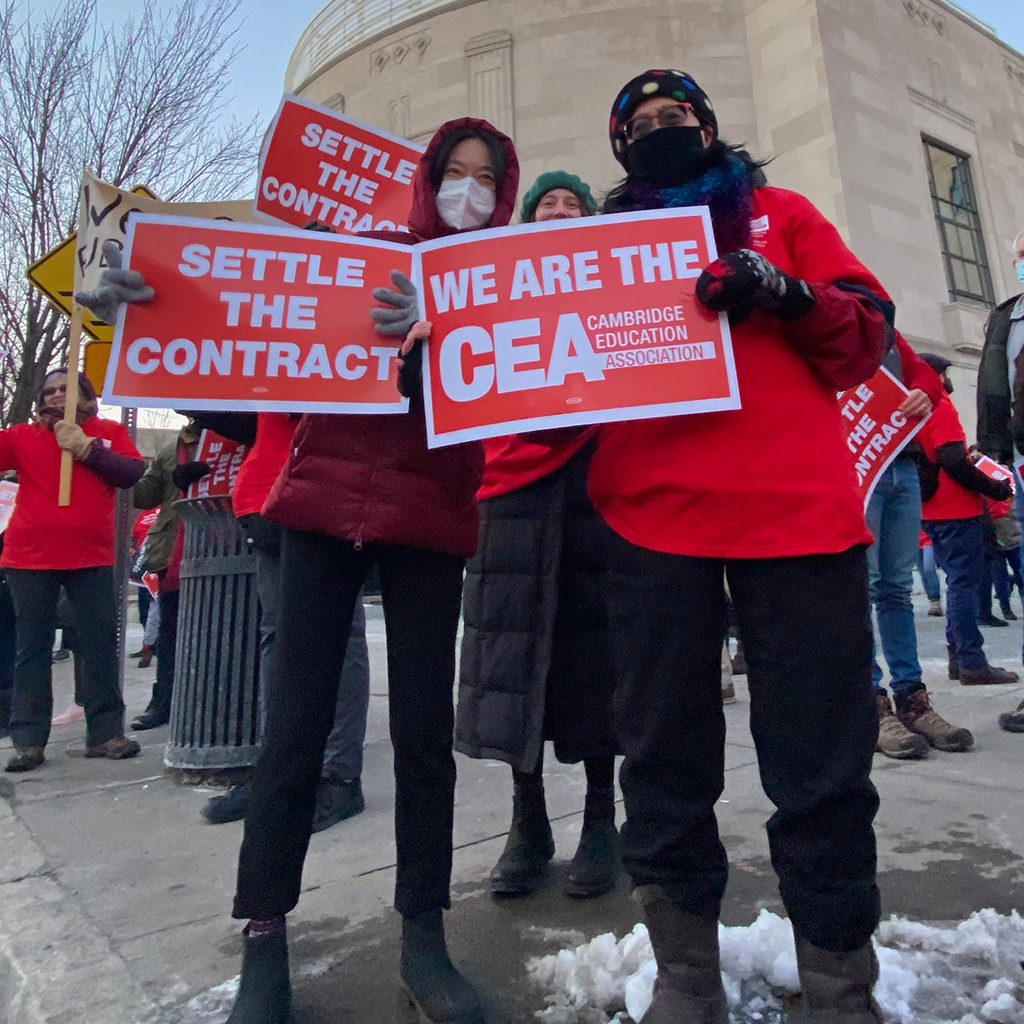 Educators at the protest Tuesday in front of where the School Committee meets. (Photo: Marc Levy)

Officials soon sent a letter with their own view of the situation, but union members weren’t satisfied and took to the streets.

On Tuesday, nearly 200 union supporters in red T-shirts – layered over winter jackets against the cold – and holding red “Settle the Contract” placards gathered in front of the Cambridge Rindge and Latin School, cheering to music from a portable stereo and then rousing speeches, eliciting supportive honks from passing cars. (The slogan was to “wear red for ed.”)

Union members continued to demonstrate outside the building as the committee met, with addresses to the crowd by Betsy Preval, a Cambridge educator who is director of the National Education Association in Massachusetts, and Massachusetts Teachers Association president Merrie Najimy. 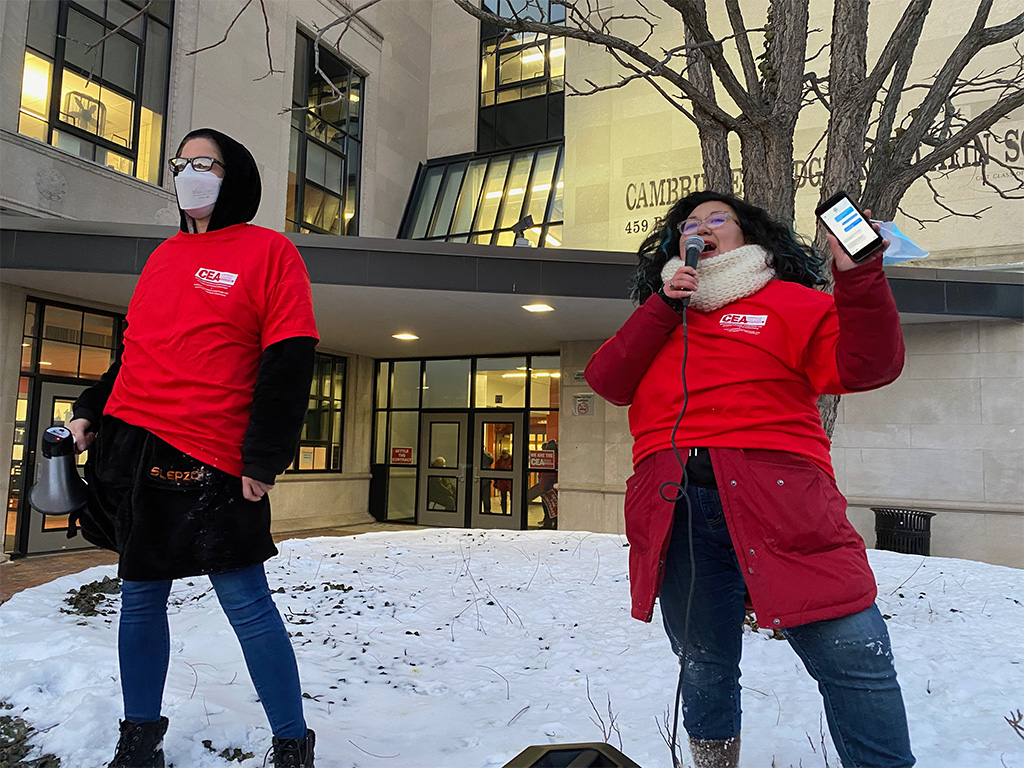 Inside, Monahan brought up the stalled negotiations during the School Committee’s public comment period – breaking the rule that only topics on the agenda can be addressed, and earning a quiet reproof from mayor and committee chair Sumbul Siddiqui – with a critique of “the obstructionist law firm you’ve hired to keep those negotiations behind closed doors.”

Another front was opened on Twitter on Tuesday, with the union tweeting that it was “fighting for a fair contract, while [the district and Siddiqui], who have not been at the bargaining table, send out a divisive and manipulative email to the community.”

After the union went public with its complaints in a Monday press release at 9:15 a.m., Siddiqui and schools superintendent Victoria Greer countered in a letter sent nearly 11 hours later maintaining that the district is negotiating good faith toward its goal: a one-year successor contract that including a 2 percent retroactive wage increase – 1 percent going back to Sept. 1 and another 1 percent that would date back to the new year – and “minimal other changes,” according to the letter. The district wants a short contract so it can “develop the next multiyear district plan, which would serve as a guide for subsequent contract development.” The timing of the letters was a coincidence, and the district’s was planned independently, said Sujata Wycoff, the district’s director of communications.

The bargaining teams met five times between mid-October and Jan. 19, they said, when the School Committee’s bargaining team asked the union to make a joint request to the state’s Department of Labor Relations to appoint a neutral mediator to resolve the impasse and help the parties reach agreement on a contract.

“As of this date, the CEA has not responded to this request,” the district letter said. “The CEA has paused negotiations.”

They were confident the parties would find common ground with the support of a state mediator, the officials said.

The current agreement outlines a bargaining procedure that says “either party may [use] an outside consultant and may call upon professional and lay representatives to assist in the negotiations.” If negotiations break down, the process is governed by state laws that prohibit employee strikes but say an employer cannot “refuse to bargain collectively in good faith” or refuse to participate in good faith in mediation, fact-finding or arbitration.

The district has agreements with other unions and employee groups:

A contract with clerks was ratified in December retroactive to July 1 and runs through June 30, 2024. A contract that covers family liaisons and community and family partnerships, runs through Aug. 31, 2024. An agreement with substitute teachers was in effect for three years, through August, and its status is unknown. A tentative three-year agreement with paraprofessionals was reached Feb. 4 after expiring in August, according to a union Facebook post. The agreement has not been finalized as of Tuesday, Wycoff said.

Two out of three groups in the district operations division have contracts in place through June 2024: the American Federation of State, County and Municipal Employees, AFL-CIO (Council 93, Local 1611) Facilities Personnel, and the Cambridge Professional Safety Specialists Association.

The third group, the Food Service Employee Association, has a contract that ended in June; the status of negotiations is unknown.

This story was updated Feb. 16, 2022, to correct that the district’s Monday letter was not a response to the letter sent earlier Monday by the educators’ union.