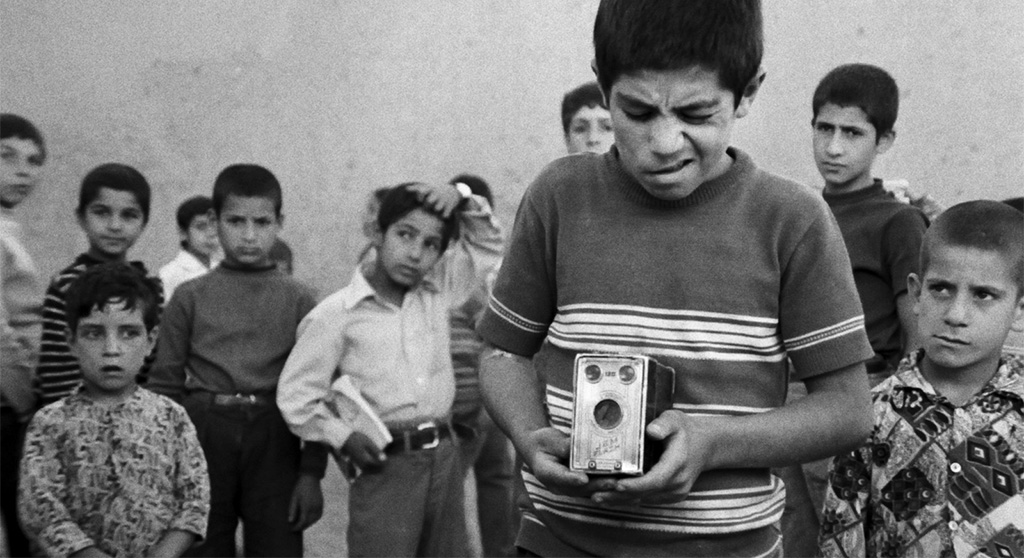 Hassan Darabi in Abbas Kiarostami’s “The Traveler” in 1974.

Cuing up this week at the Harvard Film Archive is the “Early Kiarostami” program, which runs Friday through Sept. 18. If you’re unfamiliar with the early works of Iranian master Abbas Kiarostami, who died in 2016, this is an opportunity to catch the sketches and building blocks that led to such acclaimed films as “Taste of Cherry” (1997) and the internationally flavored “Certified Copy” with Juliette Binoche in 2010.

Themes of village life and those hoping for more than their humble existences dot Kiarostami’s works; his independent lens would come under the scrutiny of the Iranian government, as we’ve seen with the recent arrests of filmmakers Jafar Panahi (“This Is Not a Film,” 2011), Mohammad Rasoulof, Mostafa Al-Ahmad and others. In “The Traveler,” the director’s second narrative feature (1974, playing Sept. 12), Qassem (Hassan Darabi), a boy obsessed with soccer, desires to travel to Tehran to see “the big match” but needs a ticket and bus money. Nothing’s going to stop him, even if it means ditching his family, conning his classmates out of their allowance or selling a stolen camera. The film’s something of a morality play that feels like a precursor to Panahi’s “Offside” (2006), about young women forbidden from attending soccer games who stop at nothing to see a match. (Panahi and Kiarostami collaborated on the acclaimed “The Wind Will Carry Us” in 1999.) In one signature scene, Qassem uses the stolen camera to photograph his classmates, charging them a fee and promising them their pictures in the morning when, in fact, there’s no film in the box. What follows is a montage of boys posing for Qassem; a haunting mosaic of children’s faces set against a world of poverty and neglect.

After the Iranian Revolution of 1979, Kiarostami made shorts and a few documentaries but no other feature narrative until “Where is the Friend’s House” in 1987 (it plays Friday and Sunday). In the film Ahmed (Babek Ahmed Poor), a young boy, witnesses a teacher reprimand his friend and classmate Mohammad (Ahmed Ahmed Poor) for not completing the homework assignment in his notebook (he’d completed it on a separate sheet of paper). The teacher warns Mohammad that if he doesn’t comply, he’ll be expelled. When Ahmed takes Mohammad’s notebook home accidentally, it triggers an epic journey through the Iranian countryside as Ahmed, intent on returning it, must walk several miles to get to Mohammad’s village. It’s a simple premise, but in Kiarostami’s hands it becomes a poem of perseverance. As in “The Traveler,” Kiarostami points his camera at rural life, taking us into the modest mud-brick villages of northern Iran and the realities of peasant living. The film would become the first installment of Kiarostami’s “Koker Trilogy,” named after the village the films were shot in.

The other installments of the deconstructive trilogy are on the program as well, with the second entry, “And Life Goes On” (aka “Life and Nothing More,” 1992, playing Sept. 9 and Sept. 11), a lens-within-a-lens film about a film director (Farhad Kheradmand) and his son driving to a village to find the boy who played Ahmed in “Where is the Friend’s House.” The region has just been devastated by 1990’s 7.4-magnitude Manjil–Rudbar earthquake, in which nearly 50,000 people died and tens of thousands more were seriously injured or displaced. As devastating as the circumstances were, the survivors continued on with their lives, salvaging what they could, trying not to give in to the grief of having lost loved ones. In one of the film’s lighter moments, a survivor sets up a television antenna to watch a world cup soccer match between Scotland and Brazil. “Life goes on,” he tells the film director nonchalantly.

The third and final chapter of the trilogy, “Through The Olive Trees” (1994, playing Sept. 11 and Sept. 18), marks an even more meta twist, as it finds a different director (Mohamad Ali Keshavarz) traveling to the village to film “And Life Goes On,” with something of a love story ripple added on. Hossein (Hossein Rezai), the village stonemason from “And Life Goes On,” and his future wife Tahereh (Tahereh Ladanian, not in “And Life Goes On”), are set to be married. With the change in plot, Kiarostami shifts the focus to be more about the goings-on of those behind the lens than just a “making of.” In a series of documentary-style sequences, Tahereh the actress rejects actor Hossein’s offscreen advances, blurring the line between the fictional happy marriage story and the documentary imbedded in the film about the making of a film. She remains defiant – issues of class play a role – and, in the film’s, final shot, an extended take filmed from atop a mountain looking down on the couple in the valley below, we can’t hear what she tells him. It’s an intentionally ambiguous moment, and arguably one of the most potent Kiarostami has captured on film.

“Homework,” (1989, playing Sept. 16) marks one of Kiarostami’s more powerful documentaries. The setting is an elementary school, and essentially a series of interviews with first-grade boys. Through an apparently innocent line of questioning – “Who helps you with homework? What happens when you don’t do it? Why don’t you do it?” – the boys tell Kiarostami of the punishment meted out should they happen to slack off. Time and time again they tell of their fathers “grabbing the belt” and hitting them. One of the film’s sad ironies is that the majority of the parents are illiterate themselves and can’t help with the homework anyway. In the film’s most poignant interview, convinced that Kiarostami and his crew are going to hit him, a traumatized boy pleads for a classmate to join him in the room to help him feel safer.

The other films on the program slate include: “A Wedding Suit” (1976, on Friday), a comedy about a tailor’s apprentice and a misplaced suit, “Orderly or Disorderly” (1981, playing before “A Wedding Suit”), an entertaining educational film made for children when Kiarostami was developing his whimsical visual style; “First Graders” (1984, on Sunday), in which a hidden camera tracks a group of children over the course of a day, “The Report” (1977, on Sept. 10), in which a government employee is accused of taking bribes just as his home life crumbles; “The Experience” (1973, on Sept. 10) about a working-class teen who falls for an uptown girl and applies for a job as a servant to be near her; “First Case, Second Case” (1979, on Sept. 16) a pseudo-documentary that looks at camaraderie and betrayal in the classroom; and the documentary “Fellow Citizen” (1983, on Sept. 18) about a newly opened low-traffic zone in central Tehran where a roadway official listens to drivers’ pleas and gets to decide who passes through and who doesn’t.