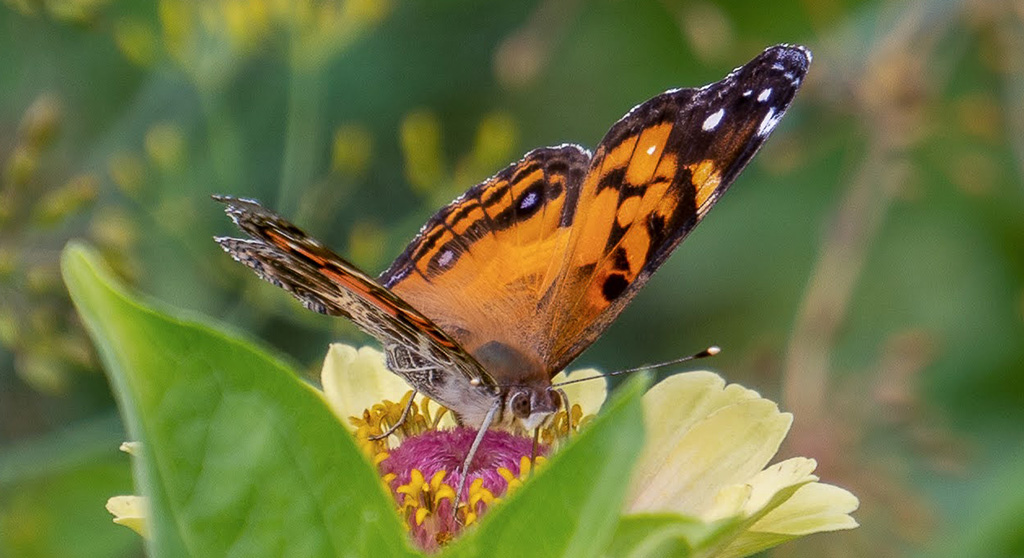 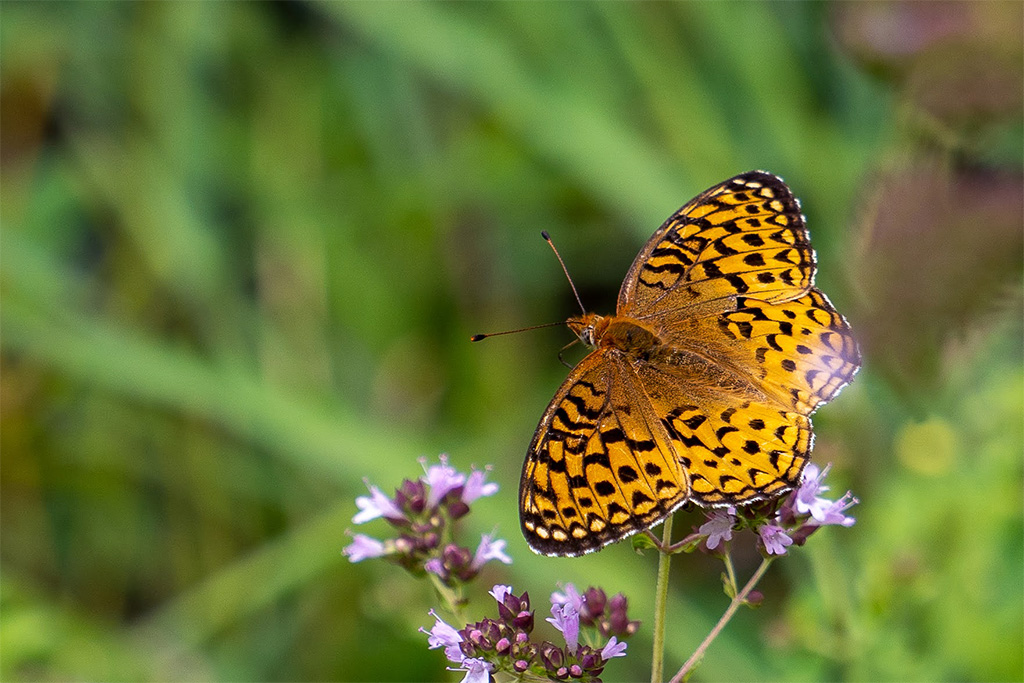 The inside wings of great spangled fritillaries have orange and black checks with a dark band around the outside edges. (Photo: Jeanine Farley)

Great spangled fritillary – what a delightful name, but what the heck is a fritillary? According to etymology online, the word “fritillary” is from the Latin fritillus, meaning “chessboard” or “dice-box.” The name apparently comes from the checkered orange-and-black pattern on this butterfly’s upper wings. “Spangled,” as we know from star-spangled banner, means “glistening” or “sparkling,” and there is no doubt that the fritillary has silvery spangles on its underside. This spotted wing pattern may camouflage it when resting in dappled sunlight.

With a wingspan of up to 3 inches, there is no doubt this butterfly (Speyeria cybele) is attention grabbing. You will see these butterflies from late June until early September nectaring on native plants such as milkweeds, mints and Joe-Pye weed as well as nonnative thistles and clover. In general, these butterflies prefer long, tubular flowers, but will nectar on others. These butterflies are often found in wet meadows, near woods. 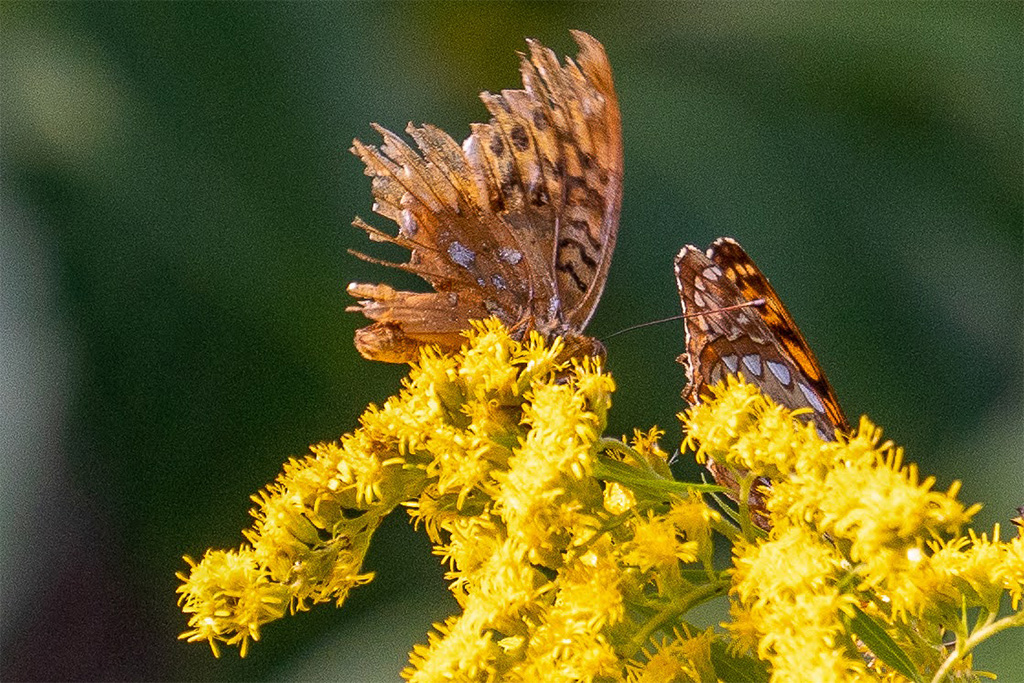 These butterflies are long-lived, and by late August or September may have frayed wings. (Photo: Jeanine Farley)

This butterfly lays its eggs in late August or early September on or near violets. The eggs hatch in a few weeks. These caterpillars are black and covered in bristly spines. When they hatch, they don’t eat at all, but instead hide in leaf litter where they overwinter as tiny larvae, waiting for the violets to emerge in spring. This is one reason to leave your leaf litter in the fall – if you remove it, you kill all the caterpillars and other organisms overwintering in your yard. 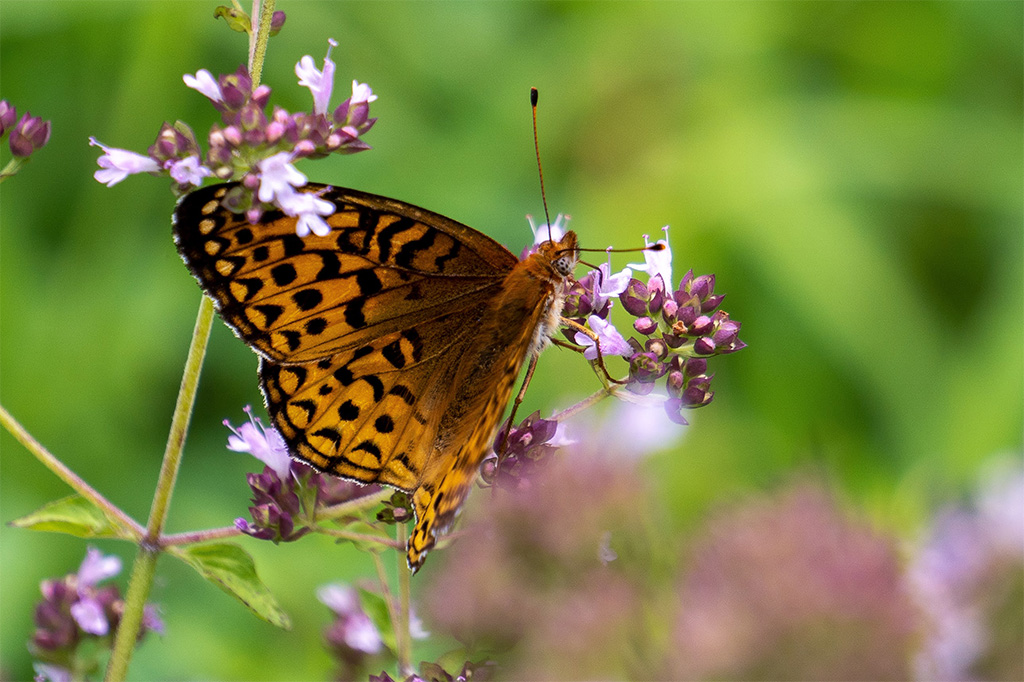 The population of this butterfly has declined greatly in the past 50 years. (Photo: Jeanine Farley)

In May, these tiny caterpillars emerge with the unfurling of the first violet leaves and begin feeding on them. (It is feared that global warming may disrupt this synchronous timing. Studies are underway.)

These caterpillars feed on violets at night and hide in leaf litter by day, so few people ever see them. This extreme secrecy is their key to their survival. Once fully grown in June, each caterpillar forms a dark reddish chrysalis that is suspended upside down from a log, a rock or bark. It’s well hidden, and people rarely see it either. 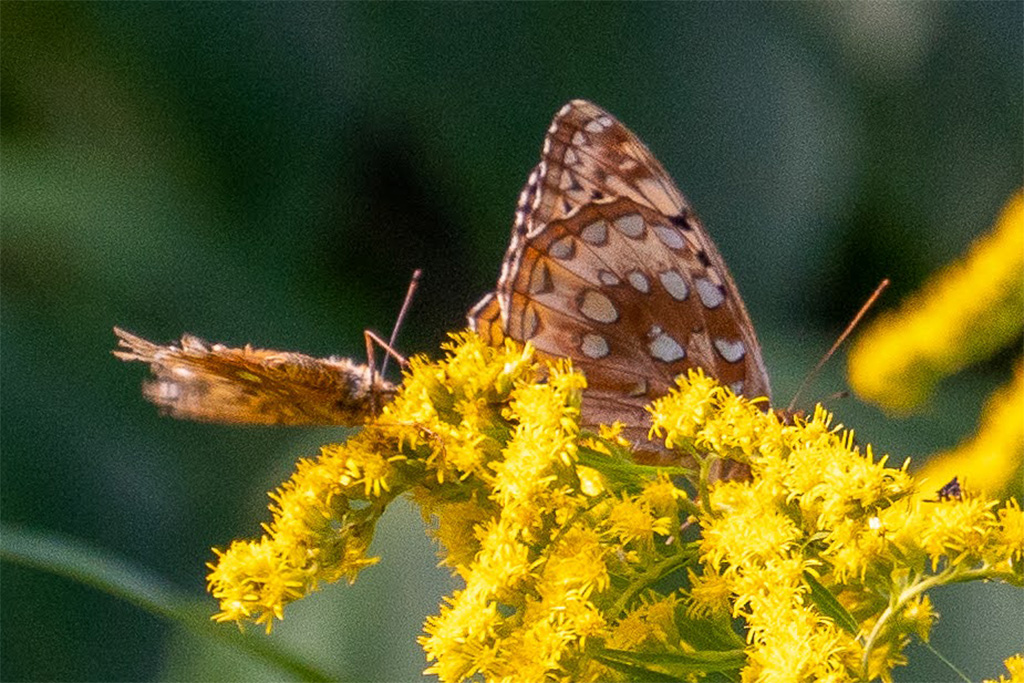 The outside of fritillary wings are spangled with white, silvery spots. (Photo: Jeanine Farley)

In two to three weeks, in late June, males emerge and begin to patrol for females. Females emerge in early July. Males and females emit pheromones that attract each other, and males court females by opening and closing their wings. Pairs usually mate at the end of July. The male dies after mating, and oddly enough, the female takes a nap (diapause) for a few weeks, and is rarely seen for the rest of July and much of August. 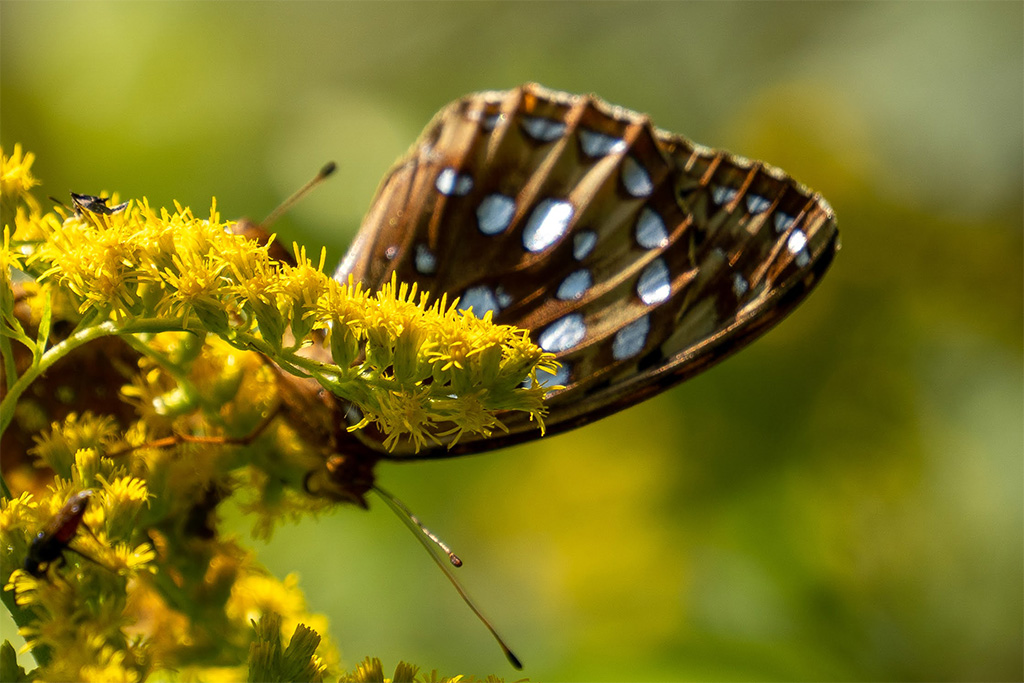 Then in late August through September, the female becomes active again and begins laying their single eggs – finding violets even if the plant has, by this time of the summer, died and blown away. It is thought that the female can smell the roots of the violets. These butterflies seem to like most types of wild violets including the common blue violet, the Canada violet, the sand violet (which is endangered) and the round-leaved violet, all of which are woodland species. 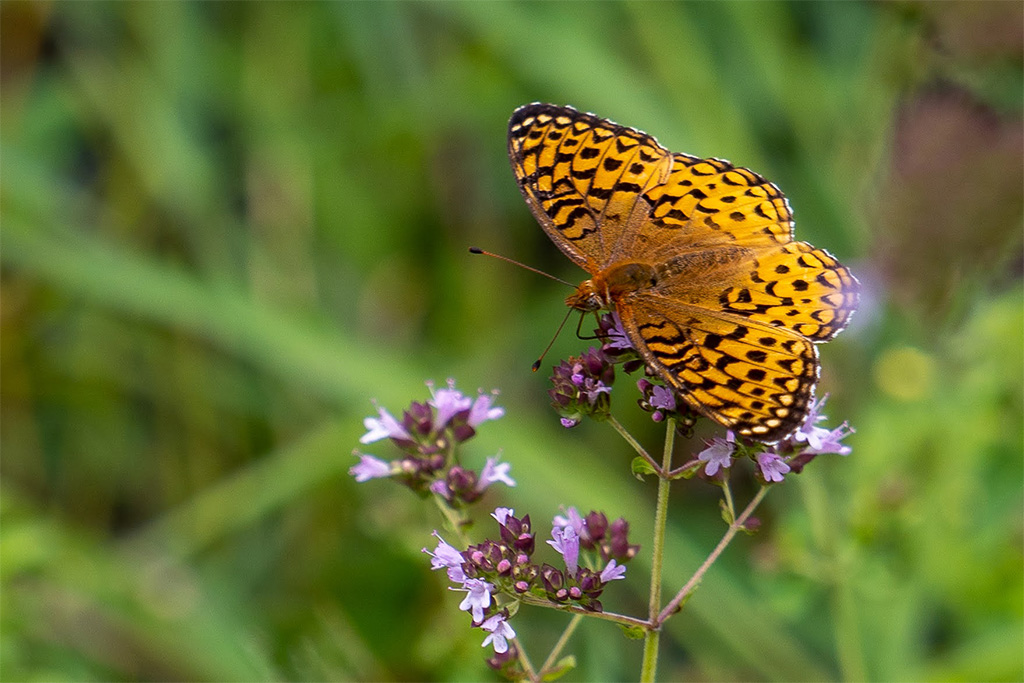 Fritillaries are brush-footed butterflies. Rather than having feet on their forelegs, they have brushes for tasting and smelling. (Photo: Jeanine Farley)

Perhaps because it is a one-plant butterfly, like monarchs that lay eggs only on milkweed, the species has declined dramatically in the past 50 years.

If you want to help great spangled fritillaries, you can maintain patches of native violets in your yard. Violets are a lovely, easy-to-care for ground cover that thrives in shady areas. In the fall, leave the leaf litter in your yard. It will help control weeds and keep the ground from drying out, in addition to housing fritillary larvae. Remember, too, that caterpillars are a favorite food of nesting birds. You’d be helping out our declining bird population, too. 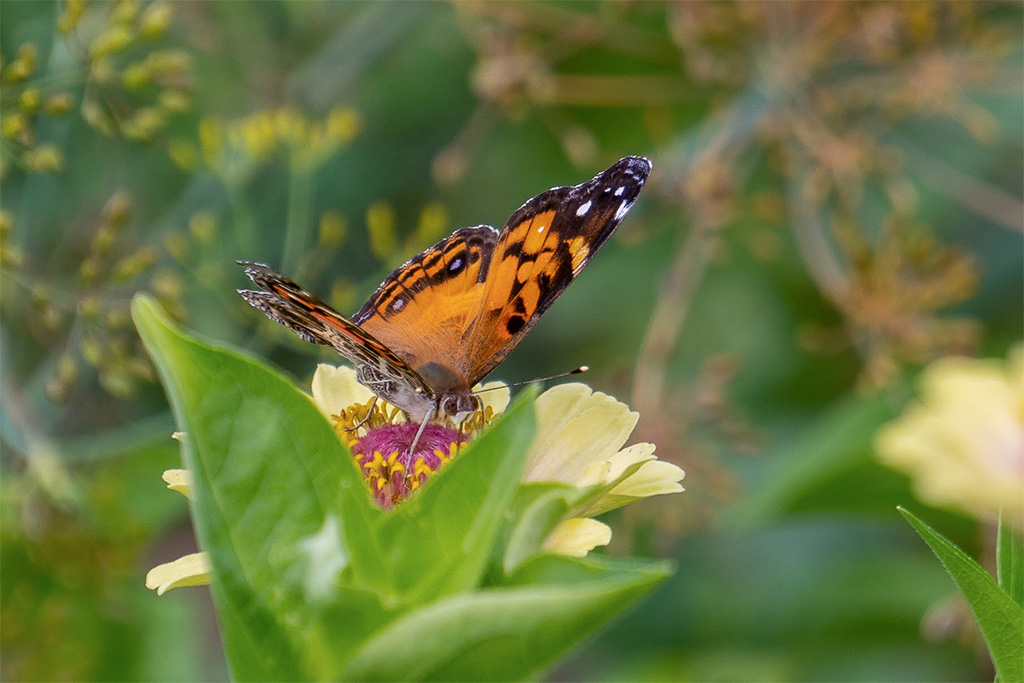 It is rare to see fritillary caterpillars, as they eat at night and stay close to the ground under leaves during the day. (Photo: Jeanine Farley)