When you can’t get enough baklava, try these indulgences from menus around Cambridge 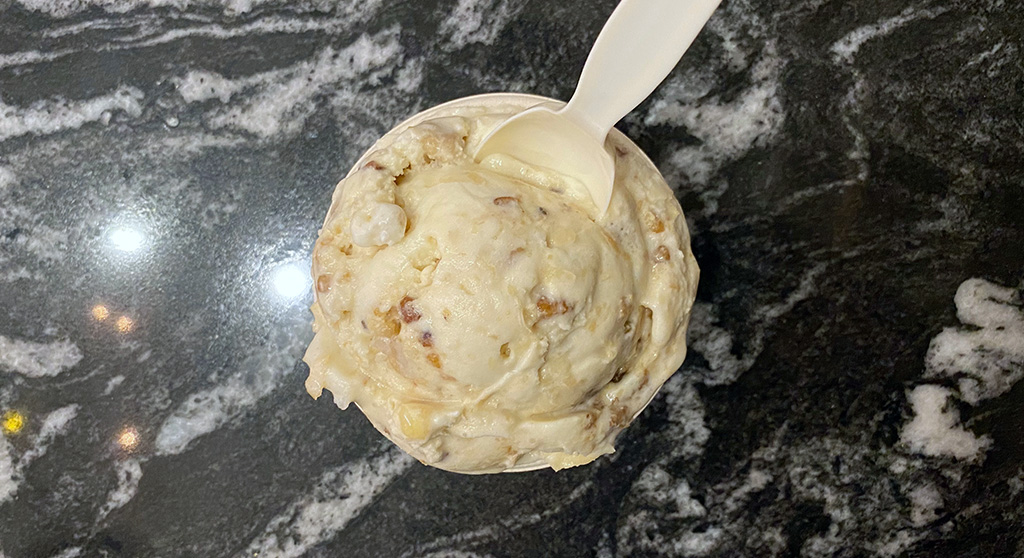 When you can’t get enough baklava, try these indulgences from menus around Cambridge

There are more than a dozen places in Cambridge selling baklava that will make you swoon, from the Sofra bakery in Strawberry Hill to Aleppo Palace, the seller of Mediterranean fast food in Central Square. The city also has a few ways to enjoy the always-tempting mix of phyllo dough, honey and nuts that are a step away from the pastry on its own, if not always a step up. 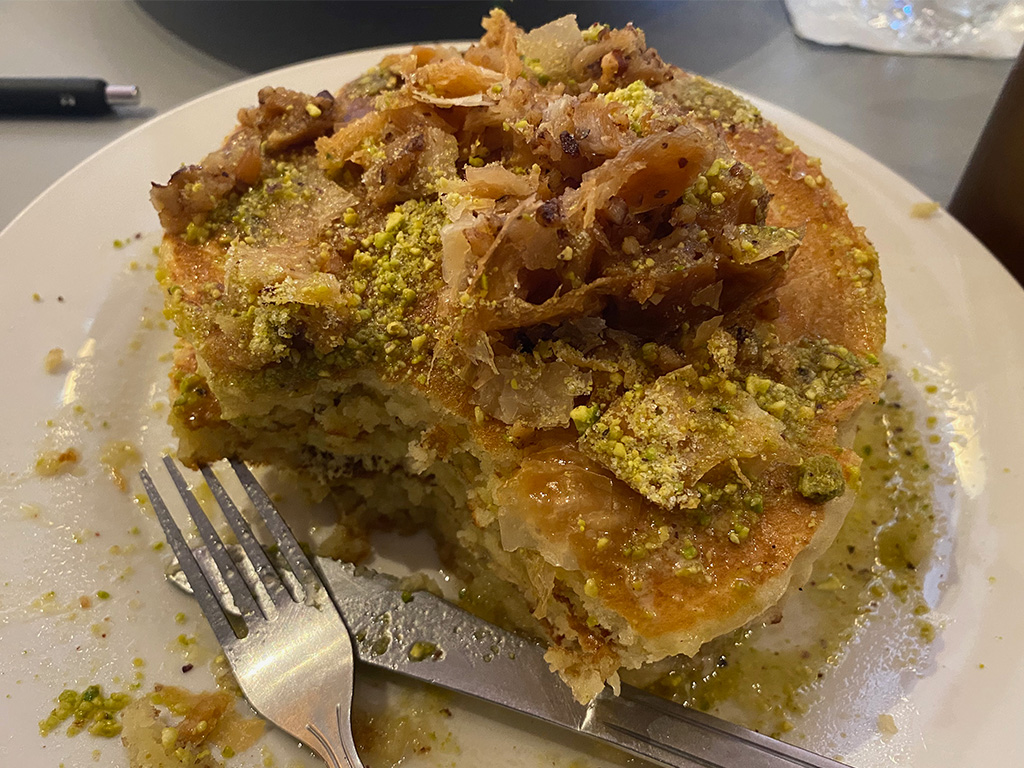 Embracing the concept of breakfast dessert could become your new favorite way of having baklava. The kind-of bizarre invitation to have cake upon waking – that is, pancake smeared with butter and drizzled in syrup – is amped up to a wild degree by having a generous piece of baklava crumbled over it, yet you’re still allowed to walk away with the implication that all that just happened was a “breakfast”; for all passersby would guess, you had a bowl of plain oatmeal and a black coffee rather than a plate of calories you could spend the whole day walking off. It’s not that the pancakes and baklava meld, but that they complement each other smartly. It’s a dish that must be had at least once, probably followed by a vow to try to stay away next weekend. It gets the gold in these rankings because coming up with the dish in the first place needs a reward. 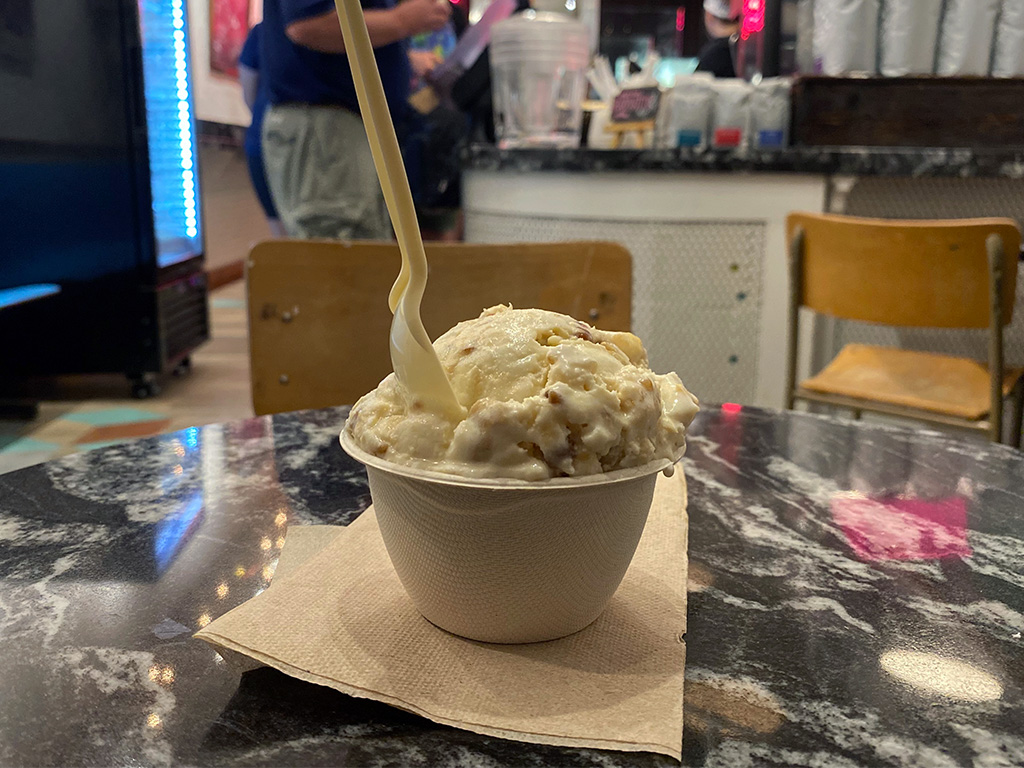 This essentially ties with baklava pancakes for deliciousness, dropping to second only because pancake industry innovation is mostly stalled while ice cream makers are always looking for stuff to mix in. In this case, New City has broken up honey-walnut filling and buttery phyllo dough from baklava into a honey ice cream to create something superior to blah Ben & Jerry’s pints you dig through looking for chunks. The baklava is throughout, blended thoroughly and richly into the base for a texture that would delight even a sufferer of longest Covid: The texture and sweetness compete for your love. And damn if the liquid nitrogen process that freezes the cream here doesn’t fulfill its own promise to result in a remarkable smoothness. 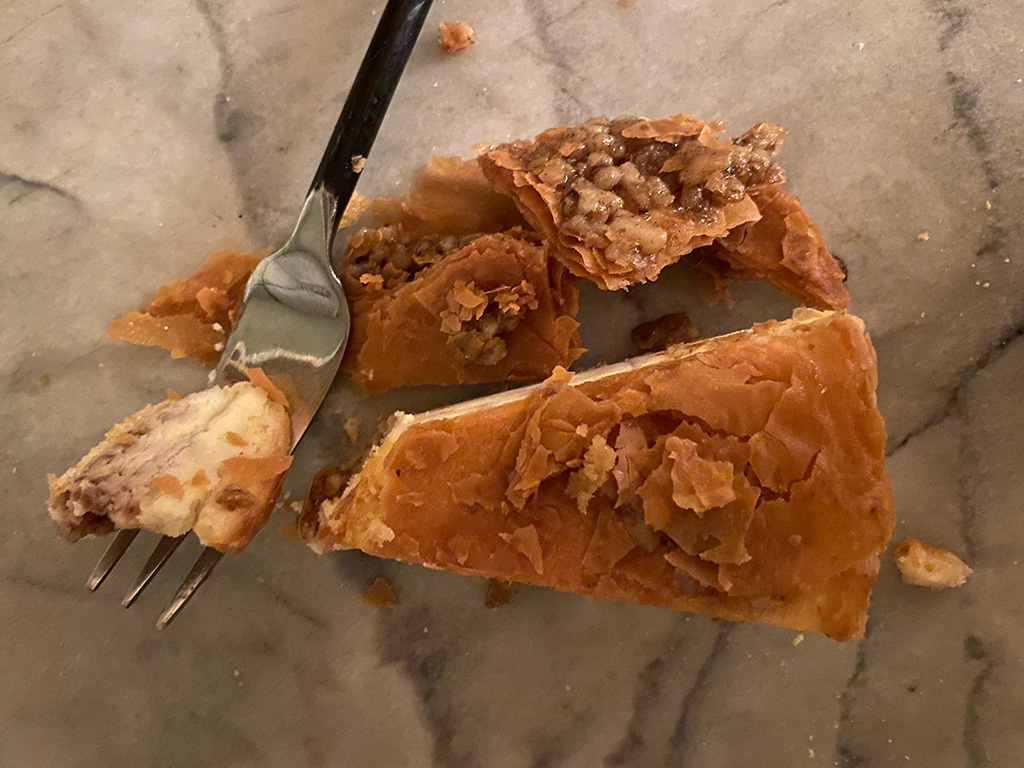 Brr. This wraps-and-bowl chain has savory food that’s a notch above many and surprisingly great supersized chocolate chip cookies. This play on a dessert that’s more related to the Guys’ Mediterranean menu is a miss. The baklava is more of a topping and integrated only weakly throughout. The flavors don’t mesh any more than the ingredients, and the only compliment that can be paid to the addition of baklava is that the cooks aren’t stingy with it. But Halal Guys serves these slices chilled into a teeth-shocking tastelessness, a temperature that might make sense only for takeaway that sits long enough to warm back to appreciable levels. (Longer than it takes to eat a Halal Guys meal.)