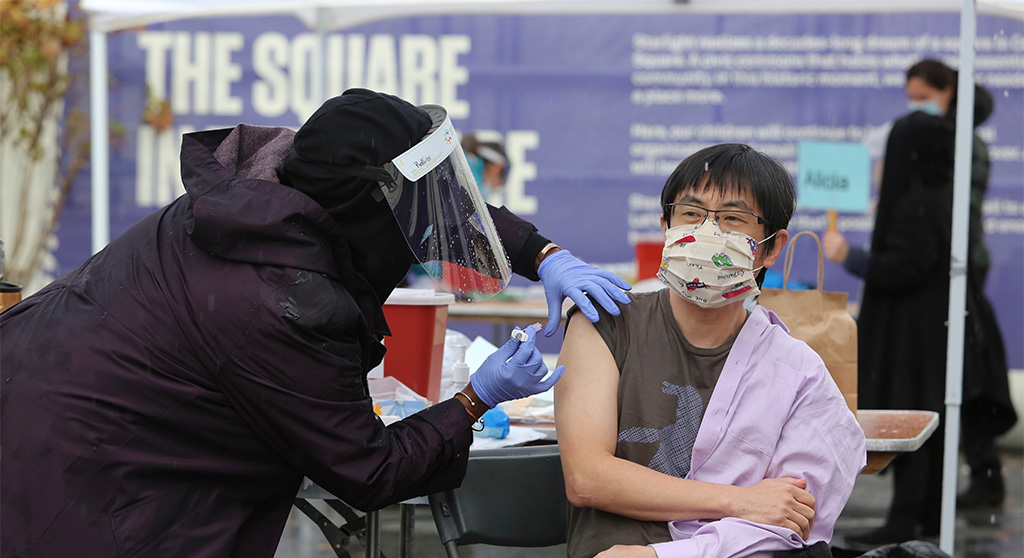 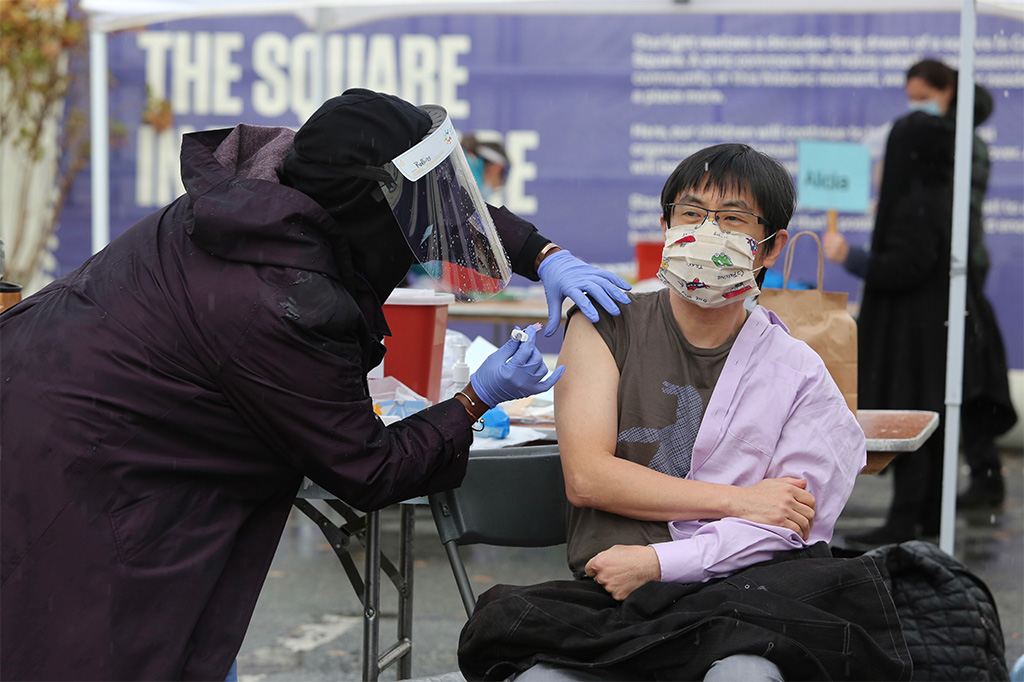 A flu and Covid vaccine clinic is held at the Starlight Square complex in Central Square. (Photo: City of Cambridge)

Cambridge public health officials have stopped relying on Covid-19 case counts to assess the strength of the pandemic here because those numbers are no longer reliable. Instead, the public health department will look at “the CDC community level, which includes hospitalizations, wastewater indicators and real-time school cases,” chief public health officer Derrick Neal told city councillors Monday. Policies around masking against the spread of Covid seemed equally diffuse.

As of now, Cambridge is at a “moderate” level, according to Centers for Disease Control and Prevention criteria. The concentration of the virus in sewage collected from the Massachusetts Water Resources Authority’s northern region rose at the end of September “but has now come down to a more comfortable level,” Neal said. “Currently there is no undue burden to the health system from Covid” based on hospitalizations in the region, he said. And Covid cases and absences in public schools are low after the holiday weekend Oct. 7-10, he said.

Case counts have fallen but don’t show the true number of new infections because some asymptomatic cases aren’t detected and people are “making their own decisions about testing, which for some means choosing not to test at all,” Neal said. Another factor cited in downplaying the value of case counts: the large number of people who test at home, eliminating them from reported results.

Though overall case numbers don’t give an accurate picture, reports of infections among nursing home residents ought to be more reliable because residents must be tested for Covid in some circumstances and the results are reported. And those numbers have been rising in Cambridge.

It’s not known what steps, if any, the city’s long-term care facilities have taken to vaccinate residents with the most recently approved booster shot, designed to protect against the original virus and the omicron variant. Residents aren’t required to get a shot. The most recent federal report on vaccination rates in nursing homes, for the week ended Oct. 2, said 77 percent of residents at Cambridge Rehabilitation and 82 percent at Neville Center have received all the shots they’re eligible for; Sancta Maria didn’t report vaccination figures for that week.

Outside of long-term care facilities, the Cambridge Public Health Department vaccinated 1,200 people in October at large clinics and in public housing developments for seniors and homeless shelters, Neal told councillors. The campaign, though, included influenza vaccinations and Neal didn’t present figures for Covid vaccinations and boosters alone. More clinics are planned for this month and into November. Neal said demand for the new omicron booster is high here, based on requests for appointments at city clinics and in pharmacies.

A question from councillor Patty Nolan about the city’s masking guidance elicited three different answers, none definitive. “We’re recommending that every individual in the community assess their own personal risk,” Neal said, adding that “if it were up to me, I would say that we should always mask indoors. But that’s not really realistic.”

Cambridge Public Health Department chief epidemiologist Anna Kaplan advised that “wearing a mask when around people where you don’t know if they could have Covid is a great idea, especially in poorly ventilated spaces,” and recommended getting the omicron booster.

City manager Yi-An Huang, a former executive at Boston Medical Center, urged residents to “really respect each other.” For example, he said, he always carries a mask and “if someone else is masking, I kind of reciprocate.” While he said he agreed that assessing personal risk is important, “we also live as a community and want to care for each other.”

In contrast to the less than explicit guidance, the city has posted signs in many public buildings, including libraries, saying masking is “strongly encouraged” indoors. And despite that advice, the councillors and staff inside the City Hall chambers Monday, including Nolan, were not wearing masks.

Nolan summed it up: “What I’m hearing, obviously, we do need to respect each other if someone’s wearing a mask [and if Covid numbers are] coming up, we know that masks work … the more that we can model that behavior, that would also be good. And I think the key is to be consistent in our messaging and letting people know the current CDC guidance. Because there’s a lot of people who are confused about that in the community.”

No one answered her question on the CDC guidance. It is:

Covid cases are ticking up in homes for elderly, where staff has until Dec. 1 to get fully boosted