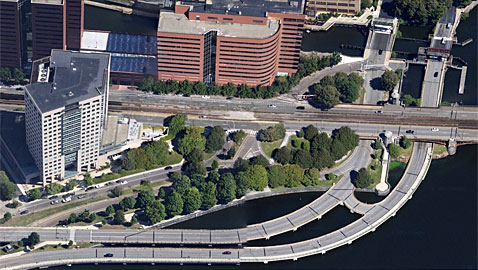 An armed robbery took place at about 4 a.m. Monday on the Cambridge side of the Longfellow Bridge, police say. (Image: Google)

Two armed robberies have been reported the past week, police say.

The most recent was at about 4 a.m. Monday, on the Cambridge side of the Longfellow Bridge. A man said he was robbed of his wallet by a suspect claiming to have a gun. The victim described the suspect as a dark-skinned Hispanic man, 20 to 25 years of age, between 5 feet, 8 inches and 5 feet, 10 inches and wearing a turquoise zipper hoodie and yellow sneakers. The suspect fled toward Boston.

The earlier incident took place between 11:30 p.m. Friday and 1 a.m. Saturday, when a man was approached by a group of six or seven men and three or four women, all 20 to 25 years of age and black, who “went through his pockets.” The victim said they stole his wallet, passport and cellphone and showed a knife when he tried to get his passport back. The location of the robbery wasn’t given, but the Massachusetts Institute of Technology Police Department is investigating with Cambridge Police.

Neither victim was affiliated with the institute, police say.

Officials suggest these precautions for people walking at night:

This information was taken from a press release.