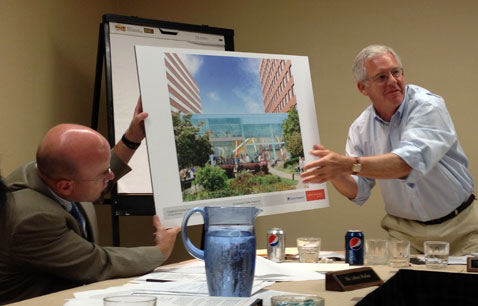 Counsel Jeffrey Mullan and Cambridge Redevelopment Authority board member Chris Bator talk about a Boston Properties rendering on Wednesday during a board meeting in Kendall Square. (Photo: Marc Levy)

Construction can start atop Kendall Square’s rooftop garden starting Sept. 1, the Cambridge Redevelopment Authority board decided Wednesday in a 4-1 vote of confidence that the project — for a connector building between two sets of Google offices — was headed in the right direction.

If the city is “lucky,” the deal will bring promised housing as well, said the authority’s chairwoman, Kathleen Born.

Concerns over the plan stripping 40 percent of the garden from public use, the preliminary nature of the designs and the sketchy circumstances under which developer Boston Properties won construction rights had resident Steve Kaiser amazed a groundbreaking only days away was being contemplated or accepted.

But board members, save for “no” vote architect Barry Zevin, said they had their reasons.

Just before the vote, Boston Properties spoke up to ensure that the width and location of its rooftop connector and another, less controversial four-story structure on Main Street (also connecting Google offices) would stay as proposed, no longer facing the possibility of change.

The board members agreed.

That means that a glassy, two-story connector building with a roughly 12,000-square-foot base will cut across the garden between 4 and 5 Cambridge Center, leaving a smaller garden to the west that would be split equally between private space for Google workers and tenants of a tower of apartments or condominiums Boston Properties is supposed to build on Ames Street. Boston Properties officials say the width and location of the connector is “crucial” and that its design is inextricably tied to the housing tower — albeit one everyone now agrees cannot be built.

A “commitment” by Boston Properties to put up housing there, after two lapsed promises for housing in past years, was one of five made to the City Council in exchange for the right to build atop the garden. While it has been described as holding some 186 units of various sizes (and as of Wednesday, possibly newly trendy “micro-units”), the commitment says only that “within one year after a certificate of occupancy for the Connector Building, Boston Properties will agree to submit for public review and comment a set of conceptual design plans for a residential building of approximately 200,000 square feet to be located on Ames Street.” Legal filings reviewed by resident Saul Tannenbaum finds no mention of such a project, only Boston Properties saying it “may in the future decide to acquire or develop additional residential properties.”

Another resident, Tom Stohlman, has been warning for months that city laws defining how much open space a developer needs per lot or block made it clear Boston Properties could not build the apartment tower, a fact acknowledged Wednesday by the company’s senior vice president of development, Michael Cantalupa.

“It was never buildable,” Cantalupa said. “We can’t build that building without further action by the city on zoning. It has everything to do with open space and a relatively long list of other things.”

Even the board’s legal counsel, Jeffrey Mullan of Foley Hoag, may have been taken by surprise by Cantalupa’s statement. As of Aug. 3, when asked whether Boston Properties had enough open space to allow construction of a housing tower, Mullan replied:

[It] is too early in the process to speculate on zoning compliance. At this point, the project is in the conceptual stage, the CRA has yet to see details of any design, and the MXD zoning is being evaluated as a part of the K2C2 [Kendall Square/Central Square] study. The CRA also recognizes that any residential project will be subject of extensive discussions with city officials and the City Council, and will be subject to certain council actions.

But less than four weeks later, Born, like Cantalupa, was treating the impossibility of the apartment tower under current law as common knowledge. When Stohlman brought up the fact Wednesday, Born interrupted him to say, “We’re all aware of that.”

“We are convinced it will be the will of city government to make new zoning in this area that encourages housing,” Born said, likely referring to the K2C2 study by city consultants Goody Clancy. If the potential change in zoning means less open space, she said, “open space versus housing has been an ongoing battle in this city and will continue to be.”

Yet in summing up the reasoning behind her vote to move to the next phase and allowing no more talk of changing the connectors’ location or width, Born said, “If we’re lucky, we’re going to get a lot of housing [out of the deal]. We just hope the economic climate will provide for that.”

In March, when he was still trying to sell the connector building concept to the City Council, Cantalupa said the company had been forced to back out of building housing once before by a bad economy. It had steel for a residential project ordered so construction could begin, only to reverse course when the market changed, he said.

To ensure that doesn’t happen, Goody Clancy is taking the approach that developers must build housing before they’re allowed to finish office or lab space, Tannenbaum noted, but Born shrugged off this approach, suggesting it was unnecessary because housing “isn’t necessarily a less profitable use,” especially on Ames Street, a “location not useful for any other use.”

Earlier, it was suggested that the wider portion of the rooftop connector building flop toward the west, leaving more public garden space to the east, but Boston Properties officials objected, saying it was impossible because Google didn’t lease the western portion of 5 Cambridge Center. Since the connector’s wider portion doesn’t connect to 5 Cambridge Center on either side — only in its central narrow portion — the argument confused several people in the audience. When Stohlman got up for public comment, he showed how the change was possible using a Boston Properties drawing of the proposal from above and a piece of paper folded in the shape of the connector’s wider portion.

But just as the board had let Boston Properties’ assertion pass without comment, so too were they unaffected by Stohlman’s demonstration of why the assertion made no sense.

Zevin had his own problem with the developer’s demand that no changes be suggested to the width or location of the connector building: Although the width was decreed by Google’s need for a wide-open floor plan in which to innovate, connector-building renderings shown to the board were chopped up inside into many smaller spaces. “This is through the looking glass,” Zevin muttered. “The floor plan we saw of those connectors was chock full of little rooms … so I’m not sure why the connector needs to be so wide. I don’t buy that. I think it’s utterly bogus.”

During the meeting Cantalupa described the direction Google was headed in its designs, although the board wasn’t yet allowed to see them, saying the “width of these connectors and their ability to be used as functioning workspace has been central to their whole agreement, central to discussions we’ve presented in front of the city and presentations we’ve made to you.” He asked that board accept that it was “important.”

Stohlman’s recommendation that Boston Properties grow plants on firewalls, roofs and even on the walls of the connector were embraced by many in the audience and on the board — despite the idea’s stark differences with the glass walls that have been proposed for the rooftop connector since February. (Cantalupa, swept along, said, “We’ll consider it.”) Bizarrely, after expressing enthusiasm for the idea during the meeting, when nearing a vote only a couple of hours later Born said there would be “another look at a green façade, which I’ve kind of lost my enchantment for, but there’s always that possibility.”

Board member Margaret Drury said Boston Properties was “misguided and shortsighted” in what it was going to do to the rooftop garden, but she valued extending to 2050 the time its remaining 60 percent would be open to the public. Conrad Crawford said his vote reflected the authority’s implicit responsibility to encourage economic development, although he didn’t believe denying the connector plan would drive away Google.

Chris Bator said he was “informed by the fact this is a process by which, whatever one thinks of what happened, the elected, legitimate representatives of the city have approved this procedure.”

Earlier in the evening councillor Minka vanBeuzekom told Bator and the other board members that at the time the council voted 7-2 in favor of Boston Properties’ plan, it wasn’t known that there were no board members putting the plan together and promoting it — only executive director Joseph F. Tulimieri. And Mullan had noted that Tulimieri had no rights under the authority’s bylaws to do so.