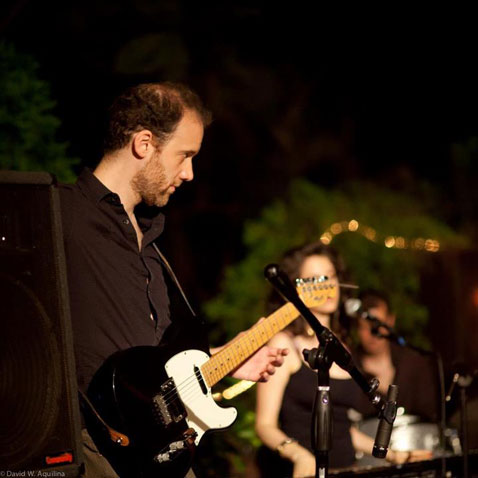 Brendan Burns performs with Lainey SchoolTree in the band SchoolTree on July 14 at a previous Org performance in Boston. The Org this month has become a benefit for musicians including Burns made homeless by a fire in Central Square. (Photo: David W. Aquilina) 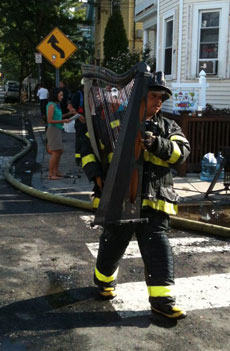 A firefighter carries out Mary Bichner’s harp from the scene of the fire. (Photo: Peter Moulthrop)

The dozen people made homeless by a fire early Thursday include artists and musicians from some of the area’s most interesting bands — including Brendan Burns of SchoolTree, Tony Leva of Jaggery and Mary Bichner, until recently leading Box Five — and the creative world is rallying to help.

The three-alarm fire was reported at 3:33 a.m. at 95 Columbia St., Central Square, the Cambridge Chronicle reported. The Somerville Fire Department helped, making for a total 64 firefighters and 15 pieces fire vehicles on the scene. “It took a few hours to get it under control,” Fire Chief Gerald Reardon told the Chronicle. Ultimately, the fire-damaged top story of the building had to come off completely.

The building had been called “Columbia House” and — in a bit of fun turned less so — “The Danger Zone.”

According to NECN, the six police officers first on the scene found too people were trapped, literally, in the Danger Zone, on the third floor, and one asleep on the second. At times crawling on hands and knees through the smoke, they got everybody occupant out safely. From NECN:

The heat was starting to build on us. Thick black smoke just took over your lungs, your eyes, and just a burning sensation, it was just hard to breathe. Our main goal was we’re just focusing on the people inside and just trying to get them out of there,” said Officer Brendan Pasco, who was just Cambridge’s police officer of the year.

There’s a Facebook group and website to help those made homeless by the fire and a Saturday performance in Boston called “org: internationalia” has been turned into a benefit.

“Eight close friends of the Org community — and frequent Org performers — lost their home,” said organizer Mali Sastri, of Jaggery. “The majority of all admission will go to these people, who are in the process of rebuilding their lives. We will also have an additional donation jar set up, for those able to be extra generous.”

The website has a form available so people can offer temporary housing, material donations, organizational help and other items and services. Another local performer, Molly Zenobia, is coordinating, and the sites were set up by performers such as Karin Webb.

“I’m technically homeless, but I feel safe and supported,” Burns told people via his Facebook page. He recounted to NECN how, given moments to escape the burning building, “I grabbed my guitar, I grabbed an amp, and I just went for it.”

Burns, who scored Silvia Graziano’s dark comedy play “Indiscreet Discretion” at the Fort Point Theatre Channel in June and has a live album available for download, credited the police and firefighters with caring enough to help save the performers’ musical instruments from the fire. “They brought everything up to high ground and then later on, without asking, they brought all of our instruments out. A lot of the cases have water damage, but the instruments are great, they work fine,” he told NECN.

Update on Sept. 3, 2012: Burns has an insider’s description of a fire and fire response, with photos, here.