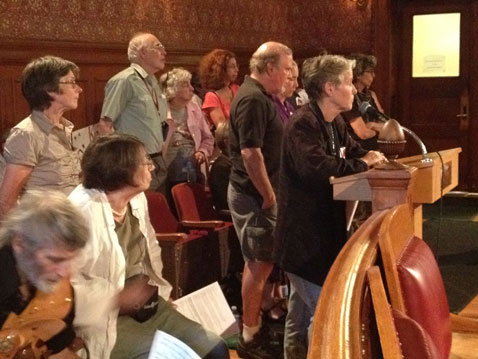 Cathy Hoffman and other residents show some development backlash to the City Council on July 30. The council wound up taking no action on the development many residents came out to protest. (Photo: Marc Levy)

With the collapse of the recent Forest City plan as inspiration, The Boston Globe posted a weakly supported and out-of-touch business-section item bearing the headline “Tech, bio firms meet resistance in Cambridge.”

“The backlash has caught the notice of biotechnology leaders, who are asking whether the industry is still welcome in Cambridge,” Robert Weisman wrote on Saturday.

This would indeed be an interesting story — if there were any examples in this story of biotechnology leaders asking that. There aren’t.

Is there room to accommodate the growing industry in Cambridge? Yes. And when there isn’t, when the community draws a line, then there are many other communities, such as Boston and the suburbs, that will be welcoming to the industry.

If Abair had any words speaking to Weisman’s thesis, they’re in the writer’s notes, not his story.

The item also quotes Peter Calkins, a Forest City executive, on the City Council opting to take no action on the developer’s proposal. But again the reader is left wondering, as Calkins’ quotes are as so: “We’re disappointed in how the process came out … Millennium still wants to do this. We still very much want to do this. But we can’t go through this same process for another three or four months with the same results.”

Finally, when Weisman talks about the tech firms meeting resistance in Cambridge, his story refers solely to Boston Properties. This is the developer that got its Google connector building plan through with the ongoing blessing of seven city councillors and four members of the Cambridge Redevelopment Authority board who by now would have to be deaf, dumb, blind and dead to not understand that the plan was sneaked through by a quasi-city official who had no rights to act; justified with an urgency that has not been asked about, let alone proven; and sold for five “commitments” that are mainly things the city was already getting or could have had anyway. If Boston Properties and Google have learned any lessons from their experiences with Cambridge, it’s that if you get enough city officials in a room together and wait patiently while they talk tough you can pretty much make them do anything you want.

There has been a backlash, but it’s from residents tired of two things: seeing city officials bending over backward to give away land and rights for paltry benefit; and company officials who still don’t get that the best way to sell a project in Cambridge is to talk to the affected residents, a lot, to make sure that when a vote comes they’re aboard with whatever the company wants to do that the city has to sign off on. If Boston Properties and Forest City had gone to the residents first with their plans to remove much of the open space in their immediate areas, the nasty, faith-shattering, time-wasting debate and revelations that have followed would have been avoided and residents would now be as a result significantly less on guard — and likely not seeking to “‘downzone’ a number of parcels around Central Square, including the planned Millennium site, making them less suitable for large-scale development,” as Weisman says.

It’s city and company officials who think they’re too clever and cool to bother with a real public process who are causing a “backlash,” and The Boston Globe should know it and be able to reflect that in a story without the alarmist tone of the Saturday item.

Take note, any tech and bio firms that want to avoid this “backlash,” as well as Calkins, who wants “very much” to build in Cambridge and not go through a process “with the same results”: It’s not hard to do.