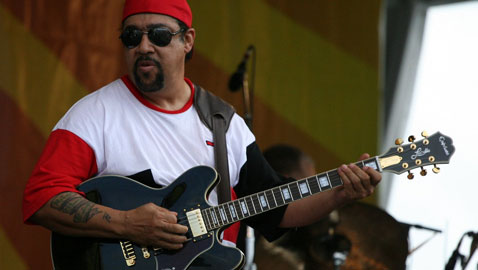 Leo Nocentelli plays with The Meter Men in New Orleans in 2009. The funk band is the first scheduled to play at The Sinclair, a 525-person concert hall coming to Harvard Square. (Photo: robbiesaurus)

The first scheduled show at Harvard Square’s 525-person concert hall, restaurant and bar, The Sinclair, is Oct. 30, and the first show is The Meter Men with Page McConnell, followed the next evening by Andrew Jackson Jihad and Future of the Left.

The subtext of this is that The Sinclair’s website, Facebook page and Twitter account are online (although elements such as consulting chef Michael Schlow’s menu is not) — and the return of large-scale live rock to Harvard Square (after the loss of the original House of Blues, now occupied by a Tommy Doyle’s Irish restaurant and pub) is just around the corner.

The club, the coming of which was reported by Cambridge Day in November, is at 50-52 Church St., filling a cavernous space left empty when the Phatt Boys restaurant closed in February 2006.

The Sinclair is a venture of Bowery Cambridge, the local extension of a New York-based concert promotion company that took over some programming at Boston’s Royale nightclub last year. Parent company The Bowery Presents also owns venues in New Jersey and New York City and Albany, N.Y.

The manager for the music component, at least, would be the same as for Royale: Boston-born Joshua Bhatti. The all-day restaurant is set up to hold 175 diners inside and another 52 on a seasonal private outdoor patio. The former Phatt Boys location is behind Dado Tea at street level and above a Fire + Ice restaurant in a building leased out by Trinity Property Management. Trinity, also owner of the Harvard Square parking garage and leaser of shops in The Garage Mall and around the square, is run by John P. DiGiovanni, also chairman of Harvard Square Business Association’s board of directors.

Business owners in the square welcomed DiGiovanni’s new venture, but some locals were unhappy with the coming of The Sinclair, citing fears rowdy, drunken clubgoers would spill out and disrupt their quiet. One noted that some bands promoted by The Bowery Presents had obscene names and others dressed in Arab garb and wondered if they were “trying to be provocative.”

The choice of The Meter Men as the opening headline is no doubt not what the residents feared. As described on The Sinclair’s website:

It’s no stretch to say that The Meters singlehandedly defined New Orleans funk. Performing and recording their own music throughout the latter half of the ’60s and into the ’70s, this seminal group laid the foundation for what is now a ubiquitous genre, influencing countless funk musicians with their earthy, down-home style. Tracks like “Cissy Strut,” “Look-Ka Py Py,” “Sophisticated Sissy,” and “Chicken Strut” are staples of the funk genre, and the band’s work backing artists like Dr. John, Robert Palmer, Lee Dorsey, and even Paul McCartney is instantly recognizable. The Meters’ sound also provided a jumping off point for much of the hip-hop of the ‘80s and ‘90s, with rap luminaries like LL Cool J, Big Daddy Kane, Run DMC, Ice Cube, Public Enemy, A Tribe Called Quest, and more sampling the band’s tracks.

And for Andrew Jackson Jihad:

At their core, Andrew Jackson Jihad is a band made up of a social worker and a gravedigger. Starting in 2004 and hailing from Phoenix, Arizona, they make music that attempts to understand and explain human nature. The music focuses on the horrid and beautiful ways that people treat each other, as well as the possibility that one day we will be able to reconcile these two forces.  Traditionally playing live as a two-person band (Sean Bonnette: guitar, vocals. Ben Gallaty: upright bass, vocals), Andrew Jackson Jihad’s show is a cathartic experience that invites the audience to sing along. With the energy of a punk band, they blaze through song after song, while stopping occasionally to interact with their audience. Their lyrics are tragic yet humorous, crass yet intelligent, heartbreaking yet uplifting. One listener has described the music as “sad in the key of happy.”

The Boston Phoenix has more.