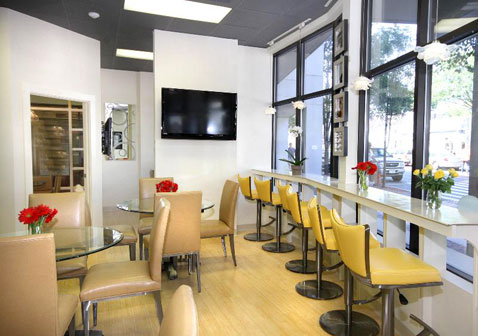 Re/Max Heritage and inCharge Energy are hosting a Sept. 12 grand opening for their shared office space in Davis Square — a concept that the businesses call a first in the area.

In Cambridge, where everyone wants to build green and the government must, environmental consultants tend toward the large-scale and even scientific — Gradient on University Road, say, or Cambridge Environmental on Charles Street. Or Camp Dresser & McKee, which is literally global in scope, or various others.

But a real estate agency and an independent power brokerage with a sideline in energy-conscious products are opening a shared office in Davis Square, Somerville — so far as the owners know, the first such partnership in the area.

“Real estate is changing dramatically, but few companies are changing and adapting to the new way of doing business,” said Linda O’Koniewski, one of three owners of the Re/Max Heritage office that will be combining with inCharge Energy.

For Re/Max Heritage, also owned by Eileen Hamblin and Steve Chuha, its a fifth office after those in Melrose, Reading and Wakefield; for inCharge Energy, a Somerville business since 2008, it’s also a showpiece for what it can do in a home or business updating or changing locations. The office incorporates green design and technologies, the owners say, including the ability to conduct entirely paperless real estate transactions.

The shared office space at 20 Holland St. is also presented as symbol of “our progressive thinking in multifunctional green space” in a press release setting the office’s public grand opening for 4 to 8 p.m. Sept. 12. Craig Foley, a managing partner at inCharge Energy — named Green Business of the Year by the Somerville Chamber of Commerce in 2010 — suggested this is a way for his company to practice what it preaches. “Improving the energy efficiency of our region’s buildings is critical to lowering the stress on our environment and energy grid,” he said.

The real estate agents have an additional interest. While they vow to “focus on helping clients live green,” Chuha acknowledged that another goal is to let property owners “maximize their investment when they sell.”

“Even folks who don’t want to ‘think green’ are interested in saving money,” Chuha said.

This post was written primarily from a press release. When called for information Tuesday afternoon, no one in sales or customer service at inCharge answered.