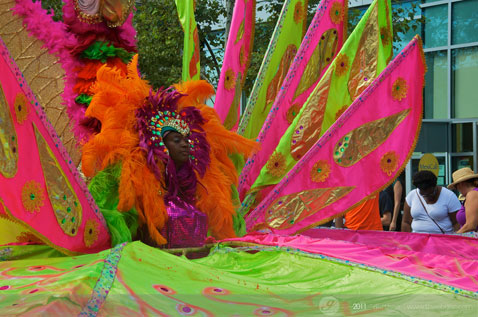 The costumes at the annual Cambridge Carnival International Festival and Parade are often dazzling, similar to what’s seen during Carnival in Rio or Mardi Gras in New Orleans. (Photo: gGraphy)

Cambridge’s most glamorous festival runs Sunday from noon to 7 p.m., starting with the “parade” part of the 20th Annual Cambridge Carnival International Festival and Parade.

“The carnival committee is inviting residents and visitors of all ages to join us and jump, dance and celebrate in and come play ‘Mas’ (short for masquerade) with us,” organizers said. Trophies in the parade are to be given for the most traditional, most unique and most innovative costumes, and there’s likely to be competition for each: Aside from the City Dance Party in June, the Caribbean/African-themed Carnival is when Cambridge cuts loose. The costume parade, accompanied by compelling rhythms, is called the highlight of the festival, and the handmade costumes are often dazzling, similar to what’s seen during Carnival in Rio or Mardi Gras in New Orleans. 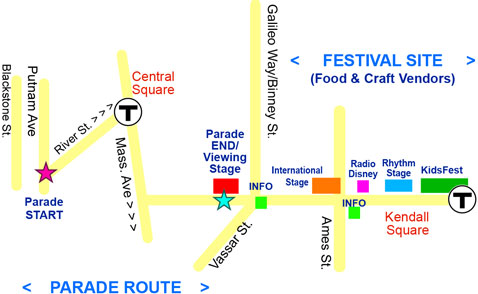 There in Kendall Square comes the rest of the event. Performers on the three stages range in style from gospel to rap, reggae to bellydance; there will also be ethnic foods and a separate KidsFest (mostly free and described as being “for children of all ages”) until 6 p.m. with stilt-walking demos, storytelling, face painting, balloon art and arts and crafts.

The event is free, having won some big names in sponsors over the years — this year, they include  Ford, Radio Disney and Yelp along with such locals as Cambridge Community Television, Knucklebones, Touch 106.1-FM and, of course, the city.

The event began as a fairly modest street fair in Central Square’s University Park in August 1992, one of two dozen North American Caribbean-style carnivals, but organizers say it is now one of the largest outdoor multicultural festivals in New England — and the largest in Cambridge, expecting some 100,000 people this year. It outgrew Central Square in 2004.

The forecast for Sunday looks clear and sunny, with a high of 74 degrees, but “carnival is rain or shine, just like it is in the islands and tropics,” organizers said.