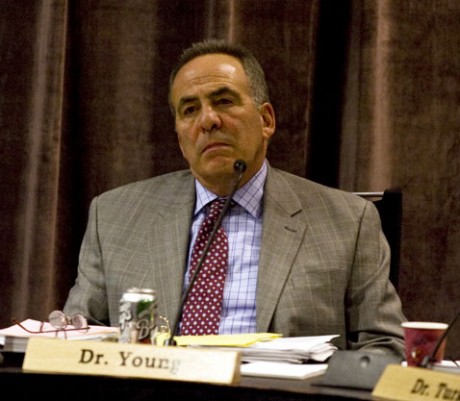 Second thoughts about a sudden restructuring of district administration hit School Committee members this week, but their discussion and 5-2 vote Tuesday didn’t undo the changes they approved unanimously Sept. 18.

In the vote last month, committee members talked for about an hour before approving Superintendent Jeffrey Young’s request to replace “executive director” positions with three assistant superintendents — for elementary education; curriculum and instruction; and student services — and have them overseen by Carolyn L. Turk, the district’s deputy superintendent for teaching and learning.

Tuesday brought about 40 minutes of reconsideration, sparked by member Richard Harding thinking the changes and new salary structure could have been approved as part of annual budgeting.

“I do think the budget process would have given us a lot more time to talk about this, really have some substantive conversation about where we want to go as a district and allow the public time to chime in through public comment, and I feel that’s a very important thing,” Harding said.

“I’m actually glad it was reconsidered simply because of the order of magnitude of this kind of change,” said Patty Nolan, the committee member joining Harding in voting against the pace of the restructuring this time, despite approving of some of the changes Young proposed and the committee made. “I’m interested to hear from my colleagues whether it is better to over the next couple of months take a step back and think about the entire reorganization, which I certainly support.”

Taking up the issue at the next regular meeting — Nov. 20 — was proposed until committee member Alice Turkel questioned how that would actually add anything to the process, but a delay of months was spotted immediately as counter to the whole point of Young’s restructuring, including the new titles and pay scale: to get the best people for the jobs. Turkel, who “didn’t want to add obstacles,” also looked briefly at letting one position be hired and holding on the others for a larger, longer restructuring process, but the idea wasn’t picked up for debate.

With committee members recognizing they’d already passed the recommendations, even Harding said he didn’t want to hold things up, and Turkel’s suggestion wasn’t the only one that didn’t get further examination. Nolan wondered without answer why Maryann MacDonald, until recently executive director of student achievement, was made assistant superintendent for elementary education instead of for curriculum and instruction, which included a role in the data handling for which MacDonald has drawn lavish praise.

Administrators are usually hired in January or February so they can give ample warning to their current schools, Young said. Pushing the hiring process to April would mean choosing from weaker candidates, while the district’s executive director for human resources, Barbara J. Allen, said the hiring process was set to begin the next day with input from special-education constituencies. “Hiring in April would in my opinion be a mistake,” Young said, calling a delay “foolhardy.”

Young also pointed out that the restructuring could have been entirely in his hands and outside committee oversight save for one thing: The “assistant superintendent” titles meant to lure top candidates who would prefer that to being an “executive director.”

“Were I to have said ‘Forget the title, we’re going to keep these positions as executive directors,’ we wouldn’t be here tonight — we’d be here, but we wouldn’t be talking about this,” Young said. “One of the things that I’ll need to consider at this point is whether I’m just going to withdraw this entirely, keep the old titles, risk not getting the best person that we want and do it myself.”

The committee’s vote shortly afterward made that unnecessary.

The superintendent often comes across as impatient with the committee, and in this case he seemed to articulate why while explaining how the new structure improved on the old and whether there was an advantage in him evaluating the district’s principals and deans directly, instead of contributing to an evaluation done officially one administrative level beneath him.

“As probably you can tell, I don’t much like being micromanaged,” Young said, “and therefore I don’t micromanage others. I do try to steer, guide, lead, support, critique, hold accountable and assess.”