In one hour, three roles created in school district administration 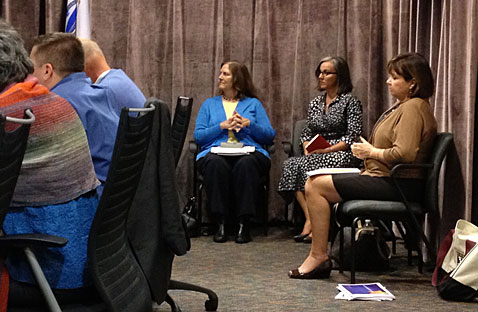 In one hour, three roles created in school district administration

Maryann MacDonald, right, listens Tuesday during School Committee debate that moved her to the new role of assistant superintendent for elementary education from executive director of student achievement and accountability. (Photo: Marc Levy)

Creating four schools and bringing massive change in school district structure took a year and a half, but Superintendent Jeffrey Young and the School Committee restructured his administration in less than an hour Tuesday, including the creation of an assistant superintendent position to oversee the district’s elementary schools.

A unanimous vote of the seven-member committee created:

Carolyn L. Turk, the district’s deputy superintendent for teaching and learning, will be responsible for overseeing the three positions.

“In Dr. Turk we have a very talented educational leader from whom I would like to see more steering and less rowing,” Young said, to a comment that Turk — the leading in-house candidate for superintendent in 2009 until Young was hired from Newton — has been the hands-on, go-to administrator for a variety of tasks. “I want to see her be able to be in the position of helping navigate the direction of the academic program through these three individuals, and frankly I can’t think of anyone more capable, qualified or able to do that leadership role.”

A vote of 6-0-1 (in which Mervan Osborne voted “present”) appointed Jean Spera as interim executive director of special education, bumping her up from assistant director, to fill a void left by the resignation of Aida M. Ramos after five years with the district.

Richard Harding made a bid to make Spera’s appointment permanent, saying he wanted the executive director “to be in the position of doing the right thing at the right time all the time … Interim status does cause some uncertainty, and having a steady, solid leader, one who is empowered to do the best by children at all times and one who shows the special education community — in fact, the whole CPS community — she’s aboard for the long haul is the way to go.”

While echoing Harding’s endorsement of Spera, calling her work “outstanding,” the superintendent would not agree with moving her into the permanent position. “The word ‘interim’ … in no way reflects a lack of confidence in her as much as it does a matter of timing within the organization,” Young said. “We feel it is really important for us, in the interests of strengthening the organization, to invent a new position and hire into it,” with Spera entitled to her assistant director job when a permanent hire was made

In fact, Young told the committee that one of the reasons for his requests of new titles and higher salaries was that “titles matter to people. My interest is in attracting the highest-quality people we can get.”

The other factor behind the restructuring was the need to reflect the massive changes in the district itself. Until Sept. 4, there were only K-8 schools that fed into Cambridge Rindge & Latin School; the Innovation Agenda introduced Feb. 1, 2011, created four upper schools for sixth-, seventh- and eighth-graders. “We now have elementary schools, which we’ve never had before,” he said. “Having the opportunity to appoint [someone] to provide leadership for the new elementary schools is very powerful for us.”

In addition, he said, this reorganization “more clearly delineated roles,” which in the past “sometimes overlapped, so sometimes staff was not clear exactly who goes to whom. Our aim now is streamline the organization and have it reflect more accurately the jobs that need to get done.” Turk will be responsible for evaluating the heads of the new upper schools and the high school principal, while MacDonald, in her assistant superintendent role, will evaluate the principals of the 12 elementary schools — including The Amigos School, a Spanish-language immersion school that remains K-8.

MacDonald began her career in Cambridge as an elementary teacher, was an early childhood resource specialist and has held the positions of assistant principal of the former Harrington School, coordinator of primary education and early childhood education and director and executive director of student achievement and accountability, Young said. She holds a bachelor’s degree in elementary and special education from Lesley University and a master’s degree in elementary reading from Boston State College and completed postgraduate coursework in educational technology at Lesley  and educational administration at Wheelock College.

The resignation of Ramos and retirement of Frances Cooper-Berry was more inducement, as Young felt Cooper-Berry’s role as lead teacher could be absorbed by the new assistant superintendent for curriculum instruction.

Committee members didn’t balk at the restructuring, taking a little less than an hour to question Young and vote during a five-hour meeting despite acknowledging that it was, as Patty Nolan noted, “actually a totally major restructuring of the district” with essentially no warning to the community.

Among the aspects Nolan thought would be most surprising to people: that although Young planned to be as constant a presence on campuses and as mentor to principals, he would no longer be their direct evaluator. Principals for older students would report to Turk; elementary school principals would report to MacDonald, who reports to Turk, who reports to Young — a structure that surprised Nolan as well, as her research found that many districts the size of Cambridge had principals report directly to their superintendent, although she also reported finding acceptance for this approach among administrators statewide and reassurance from the district’s executive director for human resources, Barbara J. Allen, that it wouldn’t affect the city’s ability to attract talent.

“I don’t think people are applying for jobs in Cambridge for the opportunity to be evaluated by me,” Young said, drawing laughs from committee members. “This is the only place I’ve ever evaluated principals. Prior to this I’ve never had that role, so the separation is not an unusual thing at all.”

He hadn’t researched dozens of districts before deciding on the new structure, Young said, but it was clear to him “there’s a significant need for a K-12  perspective and a grade-level perspective. You want both of those.”

The committee formally gets to appoint the new assistant superintendents, and the long-serving members had a request and warning for Young based on experience with his predecessor: They wanted to evaluate finalists, not be backed into a corner by being presented with a single, superintendent-selected candidate; and they warned that a motion was likely that would eliminate the superintendent’s power to extend contracts — especially for an outgoing superintendent.

Young acknowledged the warning and assured the committee that his search process would be inclusive, including a stop next month with the Parent Advisory Council on Special Education to talk about the role its members would play.

Immediately after the Tuesday meeting, the committee and district personnel went into a closed-door session to discuss, but not vote on, contract negotiations.

This post was updated Sept. 26, 2012, with job experience information for MacDonald.