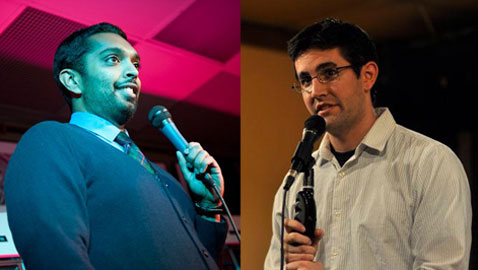 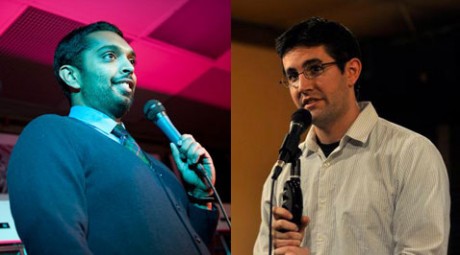 Raj Sivaraman and Kevin Anglin lead Cowboy and Indian Comedy and have put out “In Case of Emergency,” a sketch comedy album. (Photo of Sivaraman by Derek Kouyoumjia)

Most tiny audio comedy plays have a nostalgic ring even when played in the mp3 format: Cheech & Chong, Nichols and May, the Smothers Brothers, Beyond the Fringe, Monty Python, the 2000-Year-Old Man and the Firesign Theatre have been wildly influential to comedians and, these days, not much copied.

It’s a geeky album, including extensive references to mythology, superheroes, robots and Dr. Who, and there are jokes in an intellectual realm to which few comedy visas have been sought for some years. “Marxism” has Fredrick Engels pressing Karl Marx for equal billing; “Nihilist’s Night Out” namechecks Kierkegaard and Nietzsche in a funny take on parental responsibility; and “Doctor Who’s Coming to Dinner” examines race in a sketch Woody Allen might have written if he watched more BBC science fiction.

Anglin and Sivaraman agreed to answer some questions about the album, starting with what inspired their sketch-comedy-album revival. Their answers have been lightly edited and condensed:

Sivaraman: Kevin and I have been writing sketch stuff together on and off for the last four years, and I came up with this idea for a sketch that I couldn’t figure out any format for it to be funny in other than audio. (It wound up being the “Five Stages of Voicemail” track.) So we talked about putting together a sketch comedy CD.

Anglin: I remember Raj pitching the idea. Normally I don’t listen to him, but I did like the nostalgic format of a sketch CD, and we got really excited trying to plan out the format and who we could get to help us. Also, since Raj and I had a list of failed projects I saw no harm in adding this to that.

Sivaraman: We brought in my friend Ian Brownell to help direct and produce. Ian loved the idea of doing audio sketches, because he hates the fact that everyone is doing video sketches and loves the old Monty Python and Firesign Theatre comedy albums. We then slowly brought in friends to help with the project, including Tim Vargulish (who wrote “Apathetic Robot” and “Work Salad” as well as acted), Lindsay Wiroll, Kevin Harrington, J.R. Strauss and Michelle Barbera. We also brought in Faith Soloway and Daniel Fox to help with the music, Tim Jacques to do album artwork and my cousin to sing the song on “Pop Music,” so it was very much a collaborative project.

Anglin: Ian was a huge help and made the project feel like it had some credibility. And it was great to bring Tim and Lindsay in because I really enjoyed their ideas and they weren’t Raj.

Anglin: That’s where our sensibilities were. We didn’t take any sketches and say, “How can we make this more geeky?” We just naturally wrote a bunch of sketches that had that theme run throughout … which is incredibly depressing in its own right.

Sivaraman: Our sense of humor is mostly smart and geeky, which is pretty obvious if you see our standup. Or if you see us awkwardly trying to talk to women. Just kidding. We don’t talk to women.

How did you decide what tracks made the cut?

Anglin: Anything Raj pitched was immediately rejected. The process was writing sketches on our own, then reading them together and putting them in “Yes,” “Maybe” and “Written by Raj” piles. Then we started trying to really punch up and work out the sketches and ideas that we liked. This is when the sketches started becoming more collaborative and workshopped and no longer just one person’s idea.

Sivaraman: We wrote around 25 to 30 sketches and cut out the weakest ones before recording. We recorded a 21-track demo of our favorites and sent it to people whose comedy opinions we respect and knew would be the most critical. And we sadly cut two tracks that most people didn’t like and kept the rest.

Anglin: We also looked at if some sketches had similar formats and turns.

The theme of terrorism stayed, though. It’s almost as recurrent as the nerdiness.

Sivaraman: As we were writing the sketches for the album, we were noticing that the sketches were all about being frustrated or a being part of a broken system. That’s why the album cover is a giant red button that says “PULL.” The album is really just about frustrations with living, and terrorists and nerds are kind of the same people in that they’re both frustrated with the way the world operates. The difference is that nerds find solace by absorbing themselves into sci-fi or fantasy worlds. Terrorists just kill people.

Anglin: Actually, we always felt terrorism never got its fair share. Goddamn white devils. We pitched one sketch about it at first, but gradually more ideas came out of it and Raj thought making it into bumps or reoccurring themes could be good, which it was. It’s a better way to use the characters and allow them to grow (or devolve) without cramming it into one absurdly long, boring sketch.

Did any solid favorites emerge during the process — like a comedy “hit single”?

Anglin: “Pop Music” was a favorite. That got a lot of strong feedback. It also had a very well produced song, which the kids love. “Real Talk Radio” was well-liked, too. That also had a high production value. Any track that was well produced and takes the focus off our writing seemed to be enjoyed by all.

Sivaraman: I’d like to think that the album is highbrow humor, but my three favorite tracks that emerged through the process were probably the most lowbrow on the album: “Pop Music,” “Real Talk Radio” and “Apathetic Robot.” I especially enjoyed working on “Pop Music” and trying to find something more sexually disgusting than sporophagy. That’s a term I just made up, but it will make sense if you listen to the track.