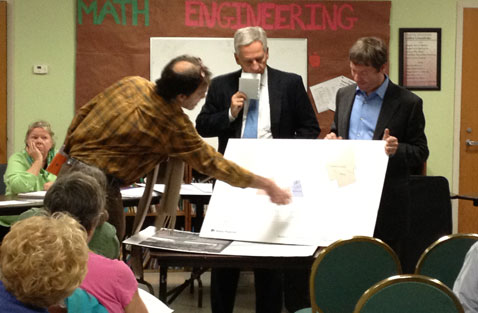 “We really are excited about doing residential in Kendall Square, we think it’s great,” said Bryan J. Koop, senior vice president and regional manager of the developer’s Boston offices, promising to “make sure” that the company’s 10-K filings with the Securities and Exchange Commission show a commitment to building, unlike its past two filings.

“One reason to believe us is that we just built 87 units in Boston, we’ve got a couple hundred completed in Washington, D.C., and another 400 coming online,” Koop told skeptical resident Heather Hoffman during a meeting of the East Cambridge Planning Team. “We’re in that business, that’s what we’re doing.”

The company has dangled housing and pulled it back twice before.

Koop and David Stewart, whom Koop said would be the project manager for the Kendall Square residences, acknowledged that the building they envision for Ames Street — promised to city officials in March as part of the city handing over 42 percent of a beloved rooftop garden — will need help from the city to become a reality. Another Boston Properties executive, Michael Cantalupa, has admitted the building will be “impossible” under current open space law; Stewart agreed that “we do need minor amendments in zoning” including to parking requirements that call for one parking space per built unit and that, in a sense, “the site itself doesn’t exist yet. The parcel of land that we need to build on requires the city to dispose of a piece of property, essentially a sliver along the frontage of Ames Street that really creates the site for this building.”

This is likely to happen, Stewart said, because the city and Boston Properties agree Ames Street could shrink to 80 feet wide from its current 100 feet and still make for a street that is friendly to pedestrians, bikes and cars. Boston Properties has also been working with the city on its K2C2 proposal, which re-envisions all of Kendall and Central squares, and there is agreement there as well that “certain things need to happen in zoning to make all that [desired] housing work,” he said.

Still, that the building was “impossible” was news to city councillor Marjorie Decker, who voted to give the rooftop garden space to the company and leads the council’s Housing Committee.

The company would buy its 20-foot strip of land from the city, not accept it as a gift, Stewart said, further promising members of the planning team in front of media including The Cambridge Chronicle and the Massachusetts Institute of Technology’s student paper, The Tech, that the company would take no regulatory shortcut in getting it.

He called Chapter 2.110 of the municipal code “a defined disposition process that the city must go through and we must go through,” although in removing 42 percent of the rooftop garden from public use, the city manager won an exemption from that law because the garden was, as the code says, “of such little significance that the … process would be unduly burdensome.”

Amid the promises and agreement that the city would have to change its zoning, grant parking exemptions and sell land to allow Boston Properties to build the residential tower it committed to, a preliminary image emerged of what might be built.

Current zoning allows a height of 250 feet, which would mean a tower of some 200,000 square feet holding anywhere from 200 to 280 units on 22 stories, give or take a story, all of which would be apartments and some of which could be trendy “micro-units,” Stewart said.

“We’re examining doing some of them in this building. They do look interesting,” he said.

The Boston Properties officials said it was too early to say how many units would be micros, studios or one-bedrooms, two-bedrooms or three-bedrooms or what the rent price range would be.

The building will be designed by FXFowle, a New York firm that specializes in sustainable architecture built in odd, tight spaces. The company will have to wrestle with the parking garage entrances, loading dock and pedestrian walkway and trash bin access way on Ames Street, especially since the executives said they were committed to filling in the block with retail — including local companies that would provide goods and services needed by residents who would go without cars. (The executives seemed surprised that zoning demanded they had to provide two bike spots per unit, but rallied by suggesting adding a bike shop as a building amenity.)

Some of the retail uses mentioned most forcefully by residents Wednesday were a pharmacy, hardware store and grocery store. “If you don’t put those things in the retail … you’re going to have a problem. People are going to have cars, and you’ll have to provide the parking,” Nancy Stiening said. “Please remember you’ve got to build a whole village.”

The tower will be built in front of and atop the parking garage, with one floor of the building connecting to rooftop garden space that will be blocked off from the public. The drawings shown Wednesday were dated Dec. 10, 2011, resident Tom Stohlman noted, while the first renderings of the building by FXFowle would likely be presented by spring, Koop said.

A question about the start of construction brought a small laugh from Stewart.

“We’ve got to go through this land disposition process and we’ve got to design the building. If we were doing really well, we’d be starting it in spring of 2014” and renting units in the building two years later, he said.

Boston Properties’ most recent Cambridge land disposition process, for the rooftop garden, was resolved within a month.