Councillor promises questions for developer on its ‘never buildable’ housing 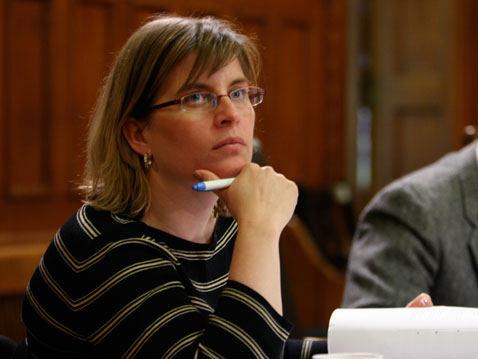 Councillor promises questions for developer on its ‘never buildable’ housing

Marjorie Decker has promised questions for developers as part of leading the Housing Committee of the City Council. (Photo: Liv Rachelle Gold)

The developer Boston Properties will be facing new questions about its commitment to build housing in Kendall Square, city councillor Marjorie Decker said Monday — and that was before Decker heard that last month the company’s senior vice president said the housing was “never buildable.”

The City Council meeting was already awash in housing issues, including the possibility of increasing developers’ affordable housing requirements and putting together a database of affordable and senior housing that might soon expire and revert to market-rate properties. Decker, who leads the council’s Housing Committee, said her fellow councillors should put together a list of issues they’d like to see examined and discussed, although she couldn’t guarantee the committee would get to every one.

She had her own issues to head the list:

“I do plan on having a Housing hearing on Boston Properties’ need to build housing in Kendall Square,” she said. “And I’m also going to have a fuller committee hearing on University Park. There’s a lot of concern and questions, and people have different sources of information on what really is happening there and not happening.”

University Park is the area near Central Square where the developer Forest City planned to build a housing tower that would take away much of a park, causing resident outrage and a retraction of the offer while the company focused on a larger commercial building.

Kendall Square is where Boston Properties committed to building housing in exchange for the right to build a structure linking offices being rented by Google, another plan that would take away much of a city park. But in August, at a meeting of the Cambridge Redevelopment Authority, Boston Properties executive Michael Cantalupa acknowledged that the company doesn’t have enough open space to fulfill the laws deciding whether and how a building can go up — even though he’s also said the plans for the Google connector building are locked into the design of that same, impossible housing tower.

But there was more to it.

“It was never buildable,” Cantalupa said Aug. 22 of his company’s promised housing. “We can’t build that building without further action by the city on zoning. It has everything to do with open space and a relatively long list of other things.”

When resident Tom Stohlman mentioned this same conclusion during public comment that evening, the authority’s chairwoman, Kathleen Born, interrupted him to say, “We’re all aware of that.”

But in fact not everyone had been aware, and Decker said Monday she was among those who’d thought the opposite: that the housing was not only promised, but possible.

“They have not said that to me when I have raised the issue,” Decker said, referring to Boston Properties. “I think it’s clear that the city expects them to build housing, and they should probably get on the same page and realize that’s what’s expected of them.”

The promise Boston Properties made, while good enough in March for seven members of the nine-member council, was never exactly rock solid.

After two lapsed promises for housing in past years, the company crafted a commitment saying only that “within one year after a certificate of occupancy for the Connector Building, Boston Properties will agree to submit for public review and comment a set of conceptual design plans for a residential building of approximately 200,000 square feet to be located on Ames Street.” Submitting conceptual design plans are one thing; building is another, and legal filings reviewed by resident Saul Tannenbaum finds no mention of such a project, only Boston Properties saying it “may in the future decide to acquire or develop additional residential properties.”

Dates for Housing Committee meetings haven’t been set — Monday’s was the first council meeting after a two-month summer break — but Decker repeated that she intended to get Boston Properties to one and try “to actually get them to the table and commit to talking about building housing.”