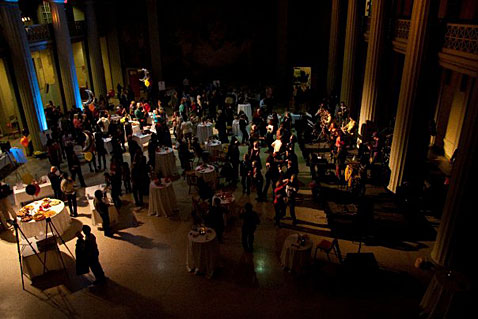 Cambridge-based charity’s Food For Free is holding its latest Party Under the Harvest Moon fundraiser Friday. (Photo: Food For Free)

Talk radio’s Robin Young, Ray Magliozzi and Doug Berman, executive producer of “Wait, Wait … Don’t Tell Me!” and Magliozzi’s “Car Talk,” share star billing Friday at a fundraiser for Food For Free, but they’re not the only draw. There’s also food, music, a silent auction and the beneficiary of the fundraiser itself: Food For Free’s Produce Rescue program, which distributed more than 1 millions pounds of food last year to 25,000 people.

The program finds fresh food that might otherwise go to waste and gets it to more than 80 emergency food programs, meaning food doesn’t to waste when it’s needed and that people can get fresh produce instead of just canned or boxed food — addressing nutrition, obesity and diet-related disease issues along with hunger. Produce Rescue has been the heart of the program since its founding in 1981, said Maggie McNally, chairwoman of the Party Under the Harvest Moon event.

Auction items have been donated by local businesses, including Hotel Marlowe, the Central Square Theatre, Ten Thousand Villages gift shops and dozens more; another couple of dozen restaurants are contributing food to the event, including Andala Coffee House, Olé Mexican Grill and Veggie Galaxy; the live music is by One Thin Dime.

“We are thrilled to be joined by Robin Young, Ray Magliozzi and Doug Berman — a constellation of stars from WBUR who will light up the room,” McNally said in a press release.  “In addition, we’ll have our own Food For Free star power at the party — past executive director David Leslie and his successor, Sasha Purpura.”