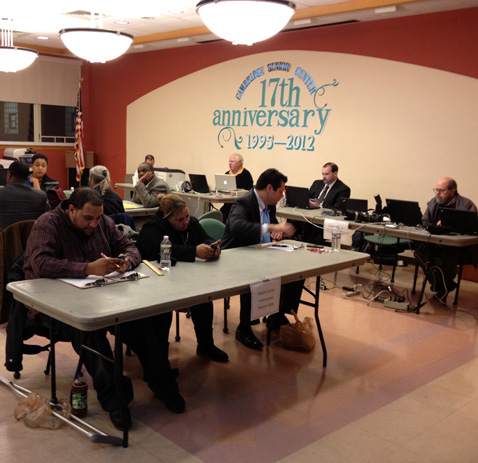 With ballot counting slowed by broken or jammed machines and complicated absentee ballots, Cambridge could see unofficial ballot results in the Tuesday election as soon as 11:30 p.m., election commissioner Polyxane Cobb said. As of 11 p.m., ballots from eight of the city’s 33 polling places had yet to arrive.

As of 11:47 p.m., though, things were dragging: As a bag of results arrived from Ward 11, Precinct 3, in North Cambridge, there were yet some five polling places left to report, an elections staffer said. By  12:21 a.m., there were still two precincts to report — the first and third precincts of the ninth ward, in Strawberry Hill.

Still, it didn’t take specific figures from Cambridge for various news sources to report Elizabeth Warren, a Cambridge resident and Harvard professor, had beaten incumbent U.S. Sen. Scott Brown, a Republican, and that a ballot question approving medical marijuana in the state passed easily. “With 49 percent of the vote counted, 63 percent had voted in favor of the measure, 37 percent against it,” The Boston Globe reported.

A record turnout was expected throughout Massachusetts, and Cambridge played its part. With 62,995 registered Cambridge voters and 43,343 considered active, the turnout as of 2 p.m. had 42 percent of those registered and a full 60 percent of those considered active already at the polls. The city’s polling places saw no letup in action from the 7 a.m. opening to 8 p.m. close.

“This was mind-boggling,” Cobb said. “We had lines not only to check in, but a wait to cast ballots. I would not be surprised if we discovered this was, if not a record, right up there with the leaders.”

Final figures would come all in a rush, though, with all results reported at once.

“A great many” balloting machines broke down under the stress, she said, which meant a greater number of write-in ballots.

In addition, absentee ballots were long, resulting in an accordionlike four-fold structure that is harder to feed into counting machines and to pack away again. Each absentee ballot might take four or five attempts to feed through for counting, Cobb said.

The ballot count remains unofficial until a week from Friday after write-ins, absentee and provisional ballots are accounted for.

As of 10:30 p.m. Tuesday, election results were also not available from Somerville, which votes in the 26th Middlesex District race for state rep between incumbent Democrat Tim Toomey, independent Mike “No Money” Connolly and Republican Thomas Vasconcelos. But Vasconcelos tweeted to say that with 69 percent of ballots counted, he had 6 percent of the vote.

“It is very clear that I have lost. It is not easy running as a Republican in one of the most liberal areas of the country,” he said.“I tried my best.”