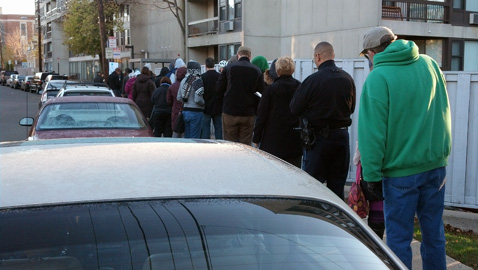 That figure doesn’t include provisional ballots, she noted, just the sum of figures from ballot boxes at each of 33 polling places in the city as of 2 p.m. — seven hours into voting, with six to go, including the period after 5 p.m. when workers leave their offices and return home to vote.

With 62,995 registered Cambridge voters and 43,343 considered active, the turnout as of 2 p.m. meant 42 percent of those registered and a full 60 percent of those considered active had already been to the polls, spurred by such choices as Democratic President Barack Obama or Republican challenger Mitt Romney and Republican U.S. Sen. Scott Brown or Democratic challenger Elizabeth Warren. There was no sign of a nor’easter looming as a follow-up to Hurricane Sandy, just clear, 40-degree weather.

There were long lines and waits to vote throughout the city, including a 45-minute wait reported at Ward 11, Precinct 3, in the Burns Apartments in North Cambridge and, according to elections commissioner Ethridge King, lines up the stairs and out the door at Ward 7, Precincts 1 and 2, in the Maria L. Baldwin School in the Agassiz neighborhood.

“This is a big one. It started at 7 a.m. and there’s been no stop,” poll worker Alfred Cameron said at the Baldwin School.

Similar turnout was expected in Somerville. “We’re counting on a very late night,” said Nicholas Salerno, chairman of the city’s election commission. The city’s arduous vote auditing process wouldn’t begin until well after polls close, he said Monday. “Polls close at 8 p.m., and we expect people to be in line waiting a while.”

In Cambridge, King’s visit to the Baldwin School revealed none of the problems brought on by a broken elevator during the September primary, which city councillor and 25th Middlesex District state rep candidate Marjorie Decker has pursued forcefully. On Monday she returned a report on the incident to City Manager Robert W. Healy a second time, saying the response showed “a total lack of accountability and ownership … I don’t have confidence this was taken as a real learning moment.”

She said she would be taking up the issue with the office of Secretary of the Commonwealth William F. Galvin.

The voting was expected to be heavy throughout Massachusetts, with Galvin reported as saying in The Boston Globe that he expected 3.2 million voters Tuesday, more than the record turnout that helped elect Obama in 2008. “I see the number of absentees has gone up, which is usually the leading indicator of interest or participation,’’ Galvin said.

City councillor David Maher saw it coming as well, but without the heavy damage from Hurricane Sandy afflicting New York, New Jersey and parts of Connecticut, he was optimistic Cambridge voting would be trouble free.

“Unlike many states where we read horrific things, we expect we will not have extraordinarily long lines in Cambridge,” Maher said, wishing luck to Decker and fellow city councillor and state rep candidate Tim Toomey.

While Decker is unopposed on the ballot — Hasson J. Rashid is running as a Republican write-in candidate — Toomey, an incumbent Democrat, has had strong opponents in independent progressive Mike “No Money” Connolly and Republican Thomas Vasconcelos.

The city shows 36,428 registered Democratic voters and 2,900 Republican voters, with the rest being independent voters or members of smaller political parties.