First snow waited for a second term. What must religious Republicans think? 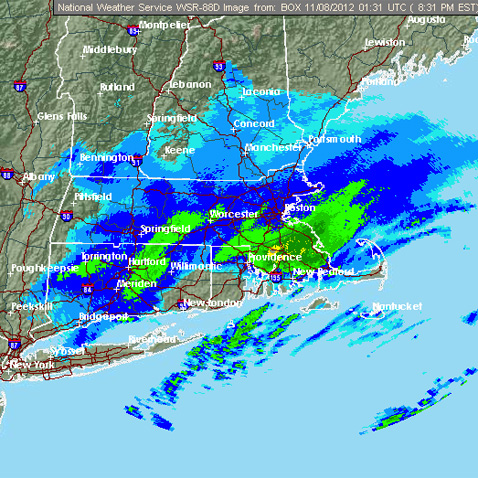 First snow waited for a second term. What must religious Republicans think?

An image from the National Weather Service shows a storm covering Massachusetts, Connecticut and Rhode Island on Wednesday, the day after voting.

It’s snowing, so I can’t help thinking about conservatives’ emphasis on religion in the context of this election.

Why? A study released in June by the Pew Research Center showed Democrats are less religious than a decade ago (meaning 11 percent fewer “never doubt the existence of God,” hitting 77 percent this year and five points even lower just for white Democrats) while Republican belief is unwavering (92 percent never doubt, same as in years past). And some of the more extreme in the party attribute things that happen on Earth to god’s intervention — hurricanes, for example, are sometimes described by Christian religious leaders as punishments for homosexuality, like a latter-day Sodom and Gomorrah.

Yet many Republicans blame Hurricane Sandy, which hit in late October and devastated New York and New Jersey, with breaking momentum Mitt Romney had generated in his run to unseat Democratic President Barack Obama.

Now there’s been a daylong nor’easter lowering temperatures and blanketing the Northeast and the liberal bastions of Massachusetts, Connecticut and Rhode Island (a combined 22 electoral votes) in snow, but this first snow of the season comes the day after Democrats turned out in force and reelected Obama.

Surely Christian conservatives must see that as god rubbing it in?

(Actually, they probably do. A Washington Post story today quotes Ohio Republican Rep. Jim Jordan, an evangelical Christian considered to be among the most conservative members of Congress, as telling Tony Perkins of the Family Research Council: “Mitt Romney is a good man, but let’s just be honest — we Republicans nominated the most liberal Republican nominee in history.”)