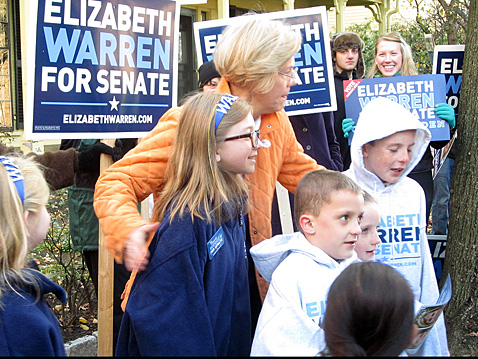 Elizabeth Warren was greeted by friendly faces as she arrived at her Graham & Parks School polling place on Tuesday. (Photo: Maia Weinstock)

There were 49,031 ballots cast in Cambridge on Tuesday, or 78 percent of its 62,995 registered voters. The city’s 33 polling places, open from 7 a.m. to 8 p.m., saw strong turnout, with voters often having to wait in line to vote. Ballots were counted at the Senior Center in Central Square by Election Commission officials and staff, with polling places being escorted in by police officers from shortly after polls closed to well after midnight.

Election Commission records show there were 46,727 ballots cast four years ago, when Obama was elected president. He and Vice President Joe Biden took 40,876 of those votes.

In the race for U.S. Senate, Cambridge voted 85 percent to 15 percent for Democrat Elizabeth Warren, a resident and professor at Harvard, over Republican Scott Warren, or 41,127 votes to 7,463 votes. The statewide figures were tighter — 54 percent to 46 percent with 88 percent of votes reported at 12:30 a.m. Wednesday, or 1.5 million to 1.3 million votes.

Statewide figures here are taken from The Boston Globe.

The Toomey campaign was saying as early as 10:20 p.m. it was confident it had the votes to win, Chris Orchard said in the Somerville Patch, and Connolly called Toomey shortly before midnight to concede. A more complete statement was expected Wednesday morning, but campaign manager Frank Gerratana passed on Connolly’s message that he was “so proud of our volunteers and of what we have accomplished.”

Looking at unofficial, internal numbers, Toomey campaign manager Max Chalkin said Toomey was “thrilled to have the endorsement of almost 70 percent of the district and about the term to come.”

“We know there are places this district can improve” and are happy to help it do so, Chalkin said for Toomey. “We appreciate the ideas brought into the campaign by Tom and Mike. There were great, substantive conversations and dialogue.”

Vasconcelos essentially conceded at about 11:05 p.m., when 69 percent of ballots in Somerville were counted and showed him with 6 percent of the vote.

“It is very clear that I have lost. It is not easy running as a Republican in one of the most liberal areas of the country,” he said.“I tried my best.”

He would release a final campaign statement within the next day or so, he said, but he first had words of appreciation: “This has been quite the life experience! Thank you to everyone for all of your support,” he said.

In the 24th Middlesex District, which represents all of Belmont and parts of Arlington and Cambridge, Cantabrigians voted 2,169 for Cambridge lawyer David M. Rogers, a Democrat, 177 for Republican Tommasina Anne Olson and 207 for James F. Gammill of the Open Innovative Party. For the whole district, the figures were 12,338 for Rogers, 4,420 for Olson and 4,857 for Gammill.

In the 25th Middlesex District, which represents Cambridge, Marjorie C. Decker won the Democratic primary to face Republican write-in candidate Hasson J. Rashid in the general election. She won 14,997 to 182.

A state Senate race also overlapped cities — the First Suffolk and Middlesex District race between incumbent Anthony Petruccelli, a Democrat, and Thomas J. Dooley III, a Republican. Cantabrigians voted 6,775 for Petruccelli and 801 for Dooley. That’s 89 percent to 11 percent, while the district as a whole, which includes parts of Boston, Revere and Winthrop, went for the incumbent 81 percent to 19 percent, or 38,780 to 9,001 with 92 percent of votes reporting as of 12:30 a.m. Wednesday.

For Question 1 of the binding statewide ballot questions, to make repair information more widely available to car owners and independent auto shops, Cambridge voted 35,841 or 88 percent in favor and 4,715 or 12 percent opposed. The statewide figures were 85 percent to 15 percent in favor, or 2 million to 342,266, with 87 percent of votes reporting as of 12:30 p.m. Wednesday

For Question 2, to let doctors prescribe medication to end the lives of certain terminally ill patients who ask for it,  Cambridge voted 30,909 or 68 percent in favor and 14,639 or 32 percent opposed. The statewide figures were tight at 51 percent opposed to 49 percent in favor, or 1.28 million to 1.25 million with 86 percent of votes reporting as of 12:30 a.m. Wednesday

Cantabrigians also voted 19,641 to 2,690 to keep U.S. Rep. Michael Capuano, a former mayor of Somerville, in his 8th Congressional District seat over independent challenger Karla Romero. That’s 88 percent to 12 percent, while the statewide figures were 83 percent to 17 percent, or 170,486 votes for Capuano and 35,093 for Romero, with 89 percent of voters reported as of 12:30 a.m. Wednesday.