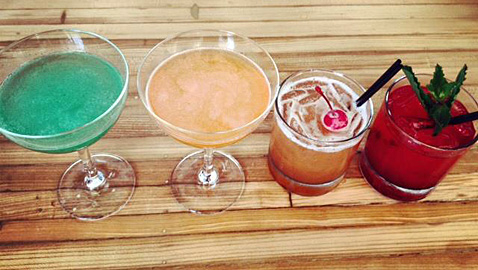 Cocktails by Josh Taylor from the Cambridge restaurant West Bridge will be featured at Boston magazine third annual Taste event Monday with those from Chris Olds of Park.

While Cambridge restaurants make up 13 of Boston magazine’s list of The 50 Best Restaurants in its November issue, they’re providing all the alcoholic creativity at Monday’s third annual Taste event.

The event, which benefits the Greater Boston Food Bank, showcases food and drink from as far as Hingham and Quincy but leans on Boston and its neighbors — including Formaggio Kitchen and Russell House Tavern in Cambridge and Journeyman in Somerville — and relies on Cambridge for all of its mixology: Chris Olds of Park and Josh Taylor of West Bridge will be behind the bar introducing participants to their creative cocktails, organizers said.

“The fall dining season is a time so many Bostonians look forward to, and with that, we are delighted to host our third annual Taste event,” said Rick Waechter, president and chief executive of the 50-year-old magazine. “Boston has become such a culinary hub and we are proud to offer an event that spotlights the best of the best for one night, all together under the same roof.”

The Cambridge restaurants in the magazine’s top 50 are a different set, although Russell House Tavern is a repeat: Area Four, Bondir, Catalyst, Craigie On Main, East By Northeast, Harvest, Helmand, Hungry Mother, Oleana, Rialto, Salts and T.W. Food. Magazine staff visited hundreds of restaurants in and around Boston to present readers with a list of the absolute best in high-end, casual, veteran or upstart dining categories, editors said.