Sinclair opening Wednesday without restaurant, but with liquor license (if they pick it up) 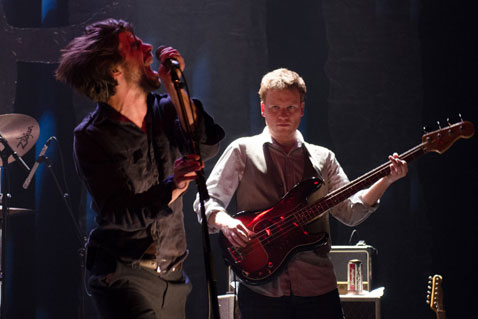 Sinclair opening Wednesday without restaurant, but with liquor license (if they pick it up)

James Trimble and Justin Hoskins of The Dirty Guv’nahs play in Atlanta in March. The band will inaugurate the stage of The Sinclair in Harvard Square on Wednesday. (Photo: Mark Runyon)

The concert hall and a bar at The Sinclair are a go for Wednesday, but diners will have to wait.

After moving its inaugural, Oct. 30 show and eight others, the 525-person club opens at 7 p.m. Wednesday for a performance by The Dirty Guv’nahs, a six-member roots band from Tennessee.

The opening but lack of restaurant for the long-awaited Harvard Square nightclub was confirmed Tuesday by the club box office.

Parent company The Bowery Presents said construction at 52 Church St. hadn’t moved fast enough for the club to open last month, but there were other issues as well: the 104-seat restaurant led by Michael Schlow isn’t ready — it is apparently also to be called The Sinclair, and while there is little information available about it on the club’s website, an interview with club principals in The Improper Bostonian says it’s to open in early December; and the state Alcoholic Beverages Control Commission hadn’t granted a liquor license for the site’s two bars. Shows were moved to either the larger Royale, in Boston, a property Bowery books, or the smaller T.T. the Bear’s Place in Central Square.

The Bowery Presents had to refile its request for a liquor license July 25 after its March 5 request was returned with no action taken, a commission official said.

After eight months, that license was granted Oct. 31, according to the state and the city’s License Commission. As of the end of business Tuesday the license hadn’t been picked up and the attached fee hadn’t been paid, the commission’s Chris O’Neill said, but that can be done up to 5 p.m. Wednesday — two hours before doors open for The Sinclair’s first show in Harvard Square.

Questions over the past two months have been directed toward Nicole Kanner, of the All Heart PR agency, but Kanner did not return calls then or Tuesday.

Schlow and chef Marcellus Coleman, formerly of New York’s Alias and Aureole, have built a diverse menu that emphasizes small plates and sharing. Coleman’s take on the ever-trendy pork belly — here pastramied and presented slider-style — and “disco fries” (served crisp with ground chorizo, roasted poblanos and house-made cheese sauce) are seemingly designed as concrete foundations for a night on the town. Veggie-heavy dishes include a roasted golden beet salad with honey and thyme topped with a ricotta salata, and shaved Brussels sprouts with smoked bacon, quinoa and grapefruit zest.