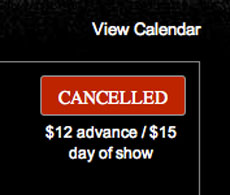 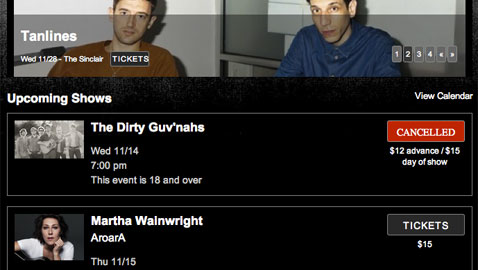 The Sinclair canceled its inaugural show at 52 Church St., Harvard Square, but gave customers no other information.

The Sinclair is missing another opening day.

The Harvard Square nightclub canceled its inaugural show Wednesday with a notification on its website’s calendar page — a red “canceled” button where “tickets” or “sold out” would normally be — but gave no further information, including no explanation on its Facebook or Twitter pages.

The band that was to perform, the six-member Tennessee roots band The Dirty Guv’nahs, was left to explain to fans via Twitter, saying at 8:26 p.m. Tuesday that:

Due to unforeseen construction delays, The Sinclair won’t be open tomorrow night and our show is CANCELED. The situation is beyond our control and we are very sorry. Tickets will be refunded from point of purchase. We will return ASAP. Again, it’s beyond our control. Thank you so much for your support and understanding.

The 52 Church St. club had already moved its original inaugural show, an Oct. 30 performance by The Meter Men, as well as eight others to either the larger Royale, in Boston, a property booked by the parent company, or the smaller T.T. the Bear’s Place in Central Square.

The 525-person club and 104-seat restaurant was announced in November and went through the city licensing process over the winter, winning approval in January. Its managers announced its schedule in early September, but by Oct. 26 it was clear construction would take too long. The first nine shows were moved and The Dirty Guv’nahs date given as the first to take place in Harvard Square.

The most recent tweet from Sinclair management comes from about six hours before the band warned its fans of cancellation and touts an Improper Bostonian article about the upcoming restaurant by Michael Schlow, while the club’s Facebook feed mentions a Dec. 22 show before The Dirty Guv’nahs warning and posts a video of another band afterward.

As of 4:37 p.m. Tuesday — less than four hours before The Dirty Guv’nahs warned fans the show was canceled — staff at The Sinclair was still telling callers that the show was on and a bar inside would be serving customers.

Questions over the past two months have been directed by Bowery Boston and The Bowery Presents toward Nicole Kanner, of the All Heart PR agency, but Kanner has not returned calls.