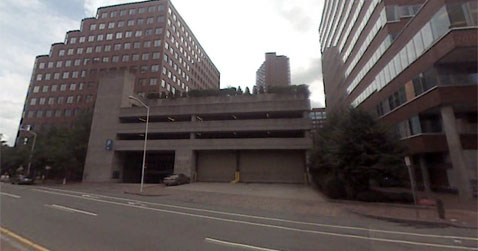 Ames Street in Kendall Square is the site of a proposed 250-foot apartment tower and surrounding retail. (Photo: Google)

Retailers including McDonald’s remain eager to get into Kendall Square, even into storefronts that haven’t been built, and a developer proposing a 250-foot apartment tower is being urged by city development officials to think about building as high as 300 feet.

The developer, Boston Properties, delivered a report to those officials – the five-member Cambridge Redevelopment Authority – on Wednesday catching them up on the progress of two connector structures and a handful of other projects, including the apartment tower on Ames Street; one or more “micro-retail” storefronts by the T entrance at the base of Main Street; and an appeal by Microsoft, a prominent tenant, to build a 30-person open-air deck overlooking a public plaza.

The timeline – and height – of the proposed apartment tower drew attention first.

“You’re witnessing a rather historic dynamic,” authority chairwoman Kathleen Born said Wednesday, “that you find a developer wanting a shorter building and at least one public board saying I’ll have it taller.”

The company was by no means opposed to building taller on Ames Street, said Boston Properties representatives Kevin Sheehan and David Stewart. But without a strong signal of support from city officials overseeing zoning that the height was welcome, they couldn’t propose 300 feet for fear of slowing down design and construction when, as Stewart said, “the market is good now. We really want to do it now.”

Company officials say they had to back out of building a few years ago, even with steel for construction already ordered, when the economy tanked and the housing market plummeted. Critics in the East Cambridge neighborhood note that that was actually the second time Boston Properties promised housing in Kendall Square and backed out, and have been unhappy that the tower promised this time, as part of the city handing over 42 percent of a beloved rooftop garden, is literally impossibly without help from the city on zoning changes and the sale of sidewalk land along Ames Street.

The building will happen this time so long as the city sells that 8,600 square feet to Boston Properties “at a fair price,” Stewart said.

When that happens, the company has a plan to build “a complete street” from where Ames meets  Main to Meadhall, the beer-focused restaurant at Broadway – meaning a mostly solid block of between 8,000 and 9,000 square feet of retail and a lobby for the apartment building rather than the industrial uses and garage entrance, fire lane and loading dock there now, Stewart said. The company once thought it could get those three “interruptions” of the block down to two, but now thinks all three car-oriented uses can fit into a single passageway wide enough for a truck turnaround and all the traffic – if “actively managed.”

The company is ready to enter the land disposition process in early January with that approach in mind, Stewart said, estimating seven to 10 months to secure the land. Design of the 22-story, 250-foot apartment tower and the rest of the block would take another nine to 10 months, putting the start of construction in 2014 “at the absolute earliest.” The company didn’t want to see that delayed by getting into a rezoning issue to push up to 300 feet.

But with the city dealing aggressively with its so-called K2C2 design process for Kendall and Central squares, the company could see a strong signal on building up to 300 feet within one or two months, said Brian Murphy, assistant city manager for community development.

At either height, most units in the building would be smaller, leaning toward studios, one-bedrooms and some two-bedrooms, Stewart said. The company is studying carefully the “micro-unit” phenomenon, he said, telling authority board member Margaret Drury that any such units built would be done with an eye toward eventually combining them into standard-size apartments when the “micro-unit” trend passed.

“It costs more to do that, but it protects us in the future,” Stewart said, after Drury noted that it was the lack of that kind of flexibility in 30-year-old buildings that caused Google to demand more floorspace from Boston Properties, leading to the loss of the public garden space. 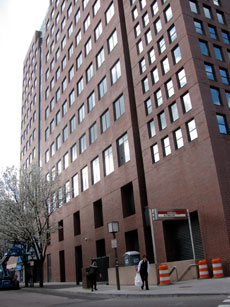 Work on the connector projects began at the end of summer and should be wrapped up in July, Sheehan said. While the four-story, ground-floor connector structure will stay under Boston Properties control, at that point Google will take over creation of its two-story, rooftop garden structure – and its design concepts remain unknown. “We’re pushing Google to give us that,” he said, estimating a look at the company’s concepts by March at the latest, while Born worried that seeing designs so late could leave the authority with “no teeth” if they deviated from the idea of transparency and movement that helped win authority votes.

Boston Properties and the authority board also agreed on what kind of retail was wanted in its Kendall properties. Two roughly 2,500-square-foot spots become available with completion of the four-story connector building and attached arcade, and Sheehan said retailers were clamoring to get in. “We’ve gotten the most pressure from McDonald’s. McDonald’s wants to be here, but no, that’s not what we’re thinking,” he said, suggesting instead something bicycle related – perhaps even a bike shop/cafe – while Murphy suggested he speak with Jesse BaerKahn, president of a brokerage called CityRetail and the local-retail guru that gets credit for bringing “six full-serve restaurants, two cafes, a dry cleaner, day care center, health club and spa to Kendall Square in less than three years.”

Other retail space – or in this case “micro-retail”  – is in development to replace a 60-foot stretch of wall by the T station entrance at the end of Main Street. Sheehan said a food seller already in Kendall was working with Boston Properties on moving into the space, although who would pay to transform the wall into storefronts wasn’t decided. Authority board member Conrad Crawford described the ultimate idea as a “bodega” similar to the small grocers found on New York City blocks.

Microsoft, which has made itself at home in Boston Properties’ 1 Cambridge Center address with a two-story lobby, matching glass wall and flashy signs, wants to let workers and visitors enjoy the open air on a third-story, 700-square-foot deck built by next summer, Sheehan said. The timeline is plausible because while mechanicals for the nearby, ground-floor Chipotle would have to move, the deck would rest on existing steel trusses and require no structural work – just construction of the deck itself and the passageway leading to it.

The deck would go atop the ballroom of the Boston Marriott Cambridge at 50 Broadway and look out over the plaza between hotel doors and another entrance to the T stop.