Getting nine-month pot ban, city manager speaks of not allowing dispensary in Cambridge at all 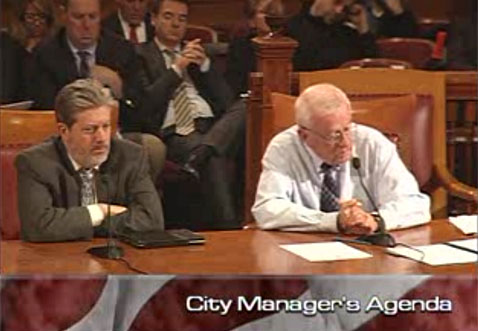 Getting nine-month pot ban, city manager speaks of not allowing dispensary in Cambridge at all

City Manager Robert W. Healy, right, speaks Monday during a City Council meeting about legislating medical marijuana dispensaries. Click on the image for a video clip quoted in the story below.

Despite nearly three-quarters of Cambridge voters backing a ballot proposal for medical marijuana – 10 percentage points over a statewide response that made it law as of Jan. 1 – the City Council accepted a nine-month ban and study period of dispensaries suggested Monday by the city manager. During discussion, he referred three times to the possibility they not be allowed in the city at all.

“I’m sure the City Council would have some concerns as to where, if they were to be permitted at all, should they be permitted,” City Manager Robert W. Healy said, referring to the medical marijuana dispensaries. “I don’t imagine you want them in the heart of residential areas or next to a school. So at a minimum, there needs to be an analysis of the zoning [of] where in the use table, if they are to be permitted, they are restricted in their permitting. And perhaps as many communities have done, based on listening to experts, perhaps they not be permitted at all.”

Statewide regulations will be in place from the Department of Public Health by May 1, but Healy told the council he made his suggestion to prevent dispensaries from opening in Cambridge until Oct. 1 “or until such future time that the City Council enacts superseding zoning regulations” based on “several long meetings of a rather large group of participants from the appropriate agencies,” including public safety and public health officials.

Among officials’ concerns was the ballot proposal’s use of the term “other” among the illnesses and conditions deserving treatment by marijuana. “A lot of things can fall into ‘other,’” Healy said, and the police faced “relative impossibility” in enforcing marijuana possession laws with the coming law.

Answers as to where marijuana could be added to existing uses were also needed, with Healy and others using the example of whether marijuana growing would be allowed in zoning for greenhouses now used for such things as tomatoes. The sole public speaker on the topic, pharmacist Gary Mello, suggested the infrastructure for distribution already existed in city drugstores and hospitals, but said that considering zoning was premature: “The first question must be whether we need one at all? Five allowable locations in Middlesex County does not mean Cambridge is compelled to host one.”

Healy said his proposed regulation “at least lets everybody see what the promulgated regulations are before these facilities are operating in the city.” Without the council adopting his proposal, a reckless entrepreneur could open as soon as Jan. 1, and at least people might already be scouting locations, he said.

Without objection, the councillors voted to let the issue go to their Ordinance and Public Safety committees and the Planning Board for hearings and reports.

State law as of Jan. 1 calls for up to 35 marijuana dispensaries (called “treatment centers”) in Massachusetts, with at least one and no more than five in each county.

Healy’s repeated questioning of whether Cambridge would allow any in its borders, and lack of reaction by the council, raised the possibility that officials would prefer to have its residents – who voted strongly in favor of the Nov. 6 ballot proposal – get their medical marijuana elsewhere in the 818-square-mile, 54-community county, where voters went for the proposal with less enthusiasm, and in some cases with much less enthusiasm.

In official results posted by the Election Commission, 37, 237 of the 50,749 Cantabrigians casting a ballot in the Nov. 6 election wanted dispensaries, or 73.3 percent, and 9,761 (or 19.2 percent) voted against the measure. There were another 3,751 voters (7.4 percent) who left that section of their ballots blank.

Based on the Globe map, Cambridge had the most votes in favor of medical marijuana of any city or town in all of Middlesex County. Somerville was right behind, at 78 percent in favor, according to the Globe, but then there is a gap of seven percentage points that picks up at 69 percent voting in favor: Lincoln, Maynard and Watertown. Most Middlesex County communities – 21 of them – were right at or just above the state percent vote of 63, but seventeen cities and towns voted below that average, with the lowest being Wakefield at 54 percent of voters approving of medical marijuana dispensaries.

A Somerville alderman has already spoken of “hoping there aren’t any in Somerville,” according to the Somerville Journal. Alderman at Large Bruce Desmond chief is looking for legislation from the city’s police chief, director of public health and city solicitor, and his board sent the matter to its Legislative Matters committee early this month.

Officials in Melrose, Reading and Wakefield started planning zoning changes this summer because they expected that the ballot measure would pass, the Globe reported. Voters in those towns gave the ballot question 65 percent, 59 percent and 54 percent approval, respectively.

In Westborough in Worcester County, officials hope to ban dispensaries outright, but fallback zoning “to limit dispensaries to certain commercial or industrial zoning districts” is to be ready in draft form within a few weeks and will likely go before annual Town Meeting in March – more than a month before the state regulations are in place, the Globe said.