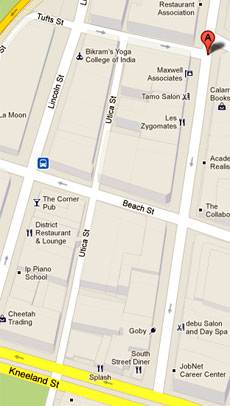 Three men from Cambridge were arraigned in Boston on Thursday after police responded to an early morning report there had been shots fired in Boston’s Leather District, near Chinatown, and found a handgun in their car.

The police officers said they were on routine patrol for the closing of the area’s nightclubs at about 2:15 a.m. when they heard shots from around South Street. They found three men hunched down and apparently trying to flee near South and Tufts streets, Suffolk County District Attorney Daniel F. Conley said. After expressing relief at the officers’ arrival, the men pointed toward Kneeland Street and said, “They went down there in a black Magnum.”

The officers broadcast a description of a black Dodge Magnum, headed toward Kneeland Street and saw the car – taking a right off Utica Street and heading in their direction.

They stopped the car at Atlantic Avenue and asked the men to get out. Eric Small Jr., 22, was driving, Dario Santos Jr., 23, was the front seat passenger and Kadeem Winspeare, 22 was the backseat passenger, police said.

Inside, the officers saw a bag of marijuana and a cash – later found to be $740 – on the center of the dashboard. They called for a K-9 unit to see if there was a gun was in the car and a Boston Police explosives-sniffing dog pointed to a Taurus .38 Special revolver in the glove compartment, police said. None of the men had with them a license for the gun.

Assistant District Attorney Peter Pasciucco of Conley’s Gun Prosecutions Unit recommended bail of $100,000 for Winspeare, saying he had six court appearance defaults, and that an open bail on a drug distribution charge out of Cambridge be revoked. Judge Raymond Dougan Jr., declined to revoke Winspeare’s open bail and set his new bail at $1,500.

Pasciucco further recommended $50,000 bail each for Santos and Small. Dougan imposed $5,000 for each.

All three will return to court on Jan. 31, according to Conley’s office.

This post was written from a press release. It was updated Dec. 27, 2012, to note that the incident took place in the Leather District, not Theater District.