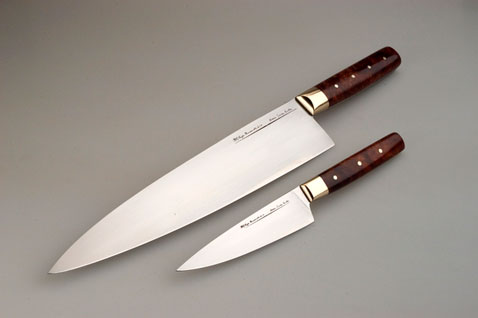 The future looks keen for a high-end knife maker in North Cambridge. Adam Simha, a Massachusetts Institute of Technology grad who has focused on making knives for corporate clients and now for himself as MKS Design, ends an $18,000 fundraiser on Indiegogo on Monday thousands of dollars in the black.

The money means he’s able to upgrade his North Cambridge workshop and pay for production of more knives and durable packaging – steps toward his goal to “build a collection comprising five to seven knives that represent what I consider the essential tools for the kitchen … I believe that a knife you value, respect and care for, even love, can change how you cook and eat for the better. It can truly change your life.”

His skills have convinced chefs such as “punk rock chef” Jamie Bissonnette, of Peking Tom’s, Pigalle, Tremont 647, Eastern Standard, Toro and Coppa fame, as well as Indiegogo funders, 13 of whom donated $1,000 or more.

A Boston magazine article this month by Leah Mennies on “Looking Sharp: Chef-Approved Knives by Adam Simha” may have convinced some people; it takes an admiring look at five custom knives Simha made for every purpose from chopping ice to deboning, including gear being used at Cambridge’s Oleana and Russell House Tavern and Kendall Square’s forthcoming Commonwealth.

“A heart-pounding thank you to everyone who made this happen!” Simha told his Indiegogo funders. “I am thrilled to be able to start getting everything together – immediately!” 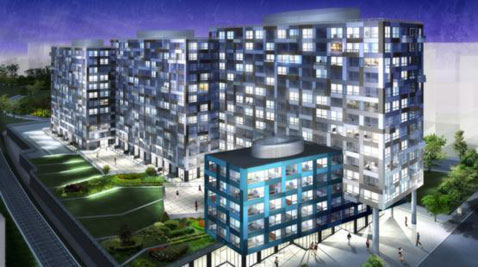 Lexington’s Wood Partners office is paying $23.1 million for a 2.4-acre development in NorthPoint. The Water Street location – by the future Lechmere T stop when opened in its new location in 2017 – once meant for condominiums will now be 392 studios, one- and two bedroom apartments, the Boston Business Journal reported Dec. 27. After a 52-year-old Mac-Gray warehouse comes down, the site “will feature three residential wings, a 13-, 14- and 15-story building and a six-story main entrance,” the Journal’s Thomas Grillo reports after talking with Brian Lawlor, principal at Cambridge’s Symmes Maini & McKee Associates.

You know what’s missing here? Amazingly, there is no mention of micro-units, the development trend mentioned in every other housing proposal since June.

Meanwhile, 4.7 acres in Kendall Square is up for grabs for an expected $370 million to $390 million, Erin Baldassari notes at the Cambridge Chronicle.

Soul Clap’s music label will be “quality, artsy, cool and funky.” Miami New Times’ Sean Levisman wrote at length last month about the electronic dance music duo’s new music label, also named Soul Clap, explaining that “In this commercially challenging era of Internet music promotion and distribution, it’s become a necessity for many underground artists to use the three-pronged approach of becoming label owners in addition to DJs and producers. For Soul Clap, however, launching a label makes sense not just professionally but also creatively, given their broad-spanning A&R vision.”

The duo – Eli Goldstein, of Cambridge, and Charles Levine, of Brookline – got its start at Cambridge clubs and parties in the early and mid-2000s, but even as Central Square has become an EDM mecca they have been increasingly at home in Miami. The only U.S. launch party for the label was Dec. 9 during Art Basel Miami Beach.

Before the event, Levine described the idea behind the label, starting with the many great performers and artists the two were meeting as they traveled the world:

For a while, we were helping these acts get some hype by forwarding them along to friends’ labels. But soon, we began to realize that these artists were so special that if we could get something off the ground, we would really break new ground … The music is really gonna range in both feel and tempo. Some of this stuff is prime-time dance floor jams, while other cuts are really meant for those personal listening and intimate moments. I don’t think any one sound will define this label. But rather, the picture as a whole will be quality, artsy, cool, and funky.