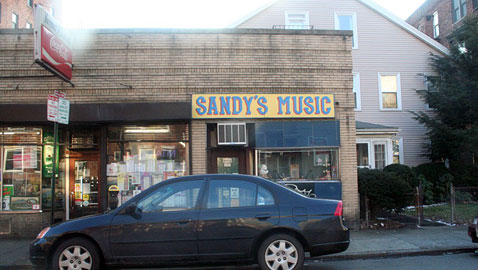 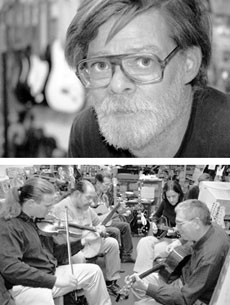 Sandy Sheehan and one of his store’s classic jam sessions, seen in 2005. (Photos; Lawrence E. Miller)

After more than four decades in business, Sandy’s Music is closing with a benefit show for its ailing founder, old-time music master Sandy Sheehan.

“Friends, it is with some sadness that I report the closing of an institution,” a user posted to the  Boston Bluegrass Union early Saturday. “Sandy has been laid up, and the store was losing money. I guess there wasn’t much choice.”

The posting pointed to a flier for “Sandy’s Old Time Music Night” to be held at 8 p.m. Jan. 22 at Johnny D’s in Davis Square, described as “an old-timey showcase” with The Dreaded Banjo Orchestra, five other bands, an in-the-round-presentation of the region’s best banjo players and, finally, “you!” meaning all are invited to “bring your weirdest banjo and join the Dreaded Banjo Orchestra.”

The invitation to play along is key to what Sandy’s was all about. The store, at 896A Massachusetts Ave., Central Square, didn’t just hold Sheehan and the stuff he sold, because Sheehan has been more than a salesman of music and instruments. As winner of the 2009 Boston Bluegrass Heritage Award, he was also host of WUMB-FM’s late Saturday “Traditional Folk” show and his own live event: old-time music jam sessions he’d been holding for more than a quarter-century.

The sessions, to which all were invited and even the famous attended occasionally (Peter Wolf “once in a great while,” Sheehan said, John Hartford, David Bromberg “when he was in town” and Mark Sandman and others from Morphine among them) was the topic of a feature in the very first print edition of Cambridge Day, Oct. 31, 2005:

Sheehan fits his part: He is scraggly and lined, a bit reclusive, the perfect mountain man, laconic and blunt, and his narrow shop is similarly well cast, crammed full of slide whistles, “authentic Ozark harps,” sheet music, packets of string, straps, light-absorbing black grained instrument cases and, hanging everywhere, those lustrous guitar and banjo bodies. The only bow to modernity is the computer, already yellowed although Sheehan claims it’s new, and a rack of compact discs.

The musicians wedge themselves into the aisle, showing up in profusion on a recent Monday that would seem to overwhelm the store’s resources – but somehow don’t. Folding chairs are produced from odd crevices as players arrive.

“We always seem to have enough,” Sheehan says.

“Thank you everyone for supporting Sandy’s Music through the years. This is truly the end of an era,” wrote the Boston Bluegrass Union poster, Jon Gersh. “Please support Sandy now, and come out to Johnny D’s … We’re hopeful that Sandy himself can be there.”

Because the show is a benefit for Sheehan, people are asked to buy tickets in advance here. Costs range from $10 general admission to a dinner/show combo for $22 and premium combo for $30. Johnny D’s at 17 Holland St., Davis Square, Somerville.

This item came as a tip from Ron Newman, who pointed out this post on notlobmusic.