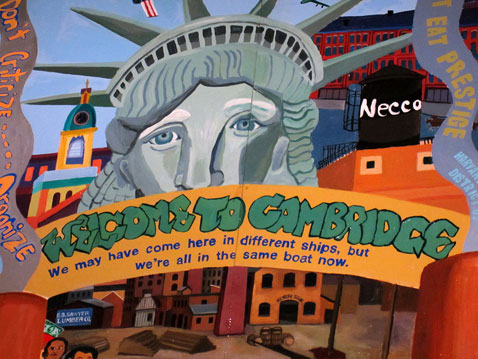 A mural on a building in Area IV near Kendall Square hints at the area’s rough-and-tumble tone as well as at its history. (Photo: Todd Van Hoosear)

Residents from Area IV don’t want to be from Area IV anymore, city councillor Denise Simmons said – meaning they want to formally rename their neighborhood. Simmons has a policy order for Monday’s council meeting asking the city manager to start the process.

“Area IV is one of only two neighborhoods in the city of Cambridge that is known by its police district number, as opposed to a formal name,” Simmons said. “Many residents in this neighborhood have long felt that the ‘Area IV’ moniker has held negative connotations both within the neighborhood itself and throughout the whole of the city.”

“A majority of the residents in this neighborhood have expressed their desire to formally rename the neighborhood to something more fitting,” she said in her order.

The suggestion has been heard before, most recently in June 2011 after the area suffered a Memorial Day shooting in Clement G. Morgan Park, resulting in a man being rushed to a hospital with nonlife-threatening injuries to the neck. The 15 bullets fired rattled residents, and fireworks that followed being mistaken for further flurries of gunfire didn’t help. Residents called for peace efforts as well as a way to change people’s perceptions.

“I want to come back to the city to talk about a name change. We’ve been tossing about Area IV, Area IV – I think The Port is our home, and [I want] to make that official and begin talking about Port pride, and pride in The Port,” said Renae Gray, a Columbia Street resident, activist for social justice and one-time council candidate. “I want us to begin thinking of ways in which we can lift up and build up The Port and our neighbors there.”

The negative perceptions of Area IV ran deep. A reporter for the Harvard Crimson wrote in 2000:

Many Cambridge neighborhoods have elegant names befitting the economic status of their residents: Peabody, Agassiz, Riverside. Area IV, on the other hand, sounds more like a name for a war zone – and for many years, it has been … In fact, the name “Area IV” itself comes from the Cambridge Police Department … perhaps aptly, Area IV is the only neighborhood that actually identifies itself by the number given to it by the CPD.

(In fact, the neighborhood of rival university Massachusetts Institute of Technology is sometimes known as Area II.)

Some progress has been made on replacing “Area IV” with “The Port.” The widely used real estate website Zillow uses both terms for the neighborhood, as does the pedestrian-friendly advisory site WalkScore.

But at the same time, negative perceptions tied to the name itself may be easing. An upscale and well-reviewed coffee shop, bakery, bar and restaurant (and now hot dog cart) opening May 2011 – which many identify as being in Kendall Square – chose the name Area Four because founders say it is “located in the tech-driven Cambridge neighborhood of Area IV.” (And it has always been tech driven; it is where Elias Howe Jr. invented the sewing machine in 1846 and where Thomas Watson sat Oct. 9, 1876, to take the first phone call while Thomas Edison made that call from Boston.)

Even as Area IV blurs into Kendall Square, changing references to it to “The Port” could be problematic because the neighborhood is north of the area long known as Cambridgeport.

Simmons’ request doesn’t specify that Area IV be known as The Port, though.

She does say residents have been talking about a change “over the past months and years, in a longstanding, ongoing conversation,” and she asks that City Manager Robert W. Healy include residents such as Gray in a study of the possibilities.

Update: Area IV resident Gerald Bergman said Simmons put forward a similar order a decade ago, prompting a November 2003 meeting with Charles Sullivan, executive director of the Cambridge Historical Commission, for background on potential names with historical significance for the neighborhood. Bergman wrote a summary in January 2004 for the 4Word, the neighborhood’s newsletter, which he attached:

Area 4 was once called Cambridgeport (along with Area 3, the area between Hampshire Street and the Somerville line, and Area 5, the neighborhood between Massachusetts Avenue and the Charles River). The name Cambridgeport comes from an early 19th century attempt to establish a deep-water port in the vicinity of modern Kendall Square.

In the 1940s the Cambridge Planning Board decided to divide the city into thirteen planning districts as a way of better analyzing data from the upcoming 1950 census. Area 5 received the name Cambridgeport (some Area 4 residents refer to this as a hijacking) and Area 4 was left with a number, but no name. All neighborhoods of the city continue to have numbers, but most also have popular formalized names. Sometimes those names have changed over the years, such as Riverside (Area 6), which once was popularly called the “Coast.” Many residents over the years have informally called Area IV the “Old Port,” the “Lower Port,” or simply the “Port.”

… Some recommendations made by residents were: Any city survey should be conducted in at least four languages: Portuguese, Kreyol, Spanish and English; residents of any age, churches, businesses, nonprofit organizations and schools in Area IV should be included in the naming process; there should be a clear decision-making process and timeline; the process should move slowly and any decision must be reached by the consent of the neighborhood.