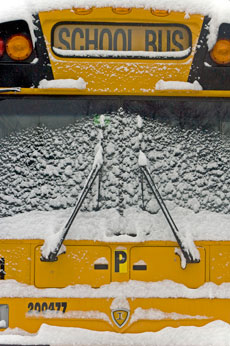 When flakes of snow cover the ground across Cambridge, parents wonder how many days their kids will be home from school this winter. Kids revere the beloved snow day, but many parents must go to work, even in poor weather, and may have challenges accommodating young children at home.

The decision to cancel school during poor weather isn’t an easy one. “It is the single most stressful and least enjoyable of my responsibilities,” said Jed Lippard, head of school at the private Prospect Hill Academy in Cambridge. “No matter what decision I make, someone’s going to be upset … I never sleep well the night before when there’s inclement weather.”

Prospect Hill Academy serves primarily working-class and low-income families, many having to travel not only across Cambridge but also from elsewhere in the state. “Whenever possible I want to keep school open,” Lippard said, “but first and foremost it is a question of safety.”

School administrators across the country have to weigh the needs of many constituencies when deciding whether to close schools for weather or danger. Kitty Porterfield, spokeswoman for the American Association of School Administrators, says it is impossible to please everyone. “There are a couple of huge concerns that have nothing to do with the weather.” Administrators try to make decisions that are as friendly to parents and families as possible, but issues such as timing, traffic and bussing are also factors.” No matter the decision, Porterfield said, routines are upset. “It doesn’t matter whether the call is right or wrong, early or late, there is always backlash from somebody.”

Thomas Galligani, the headmaster at the private Matignon High School, said he is always willing to close school if needed. “We just don’t want kids traveling long distances,” he said, adding that the process is very subjective. “I do it with the principal. We talk. You just have to assess in the morning.”

Changes in the weather

But things don’t always go as planned. Galligani recounted an occasion in which he followed the decision of the nearby Somerville Public Schools district to close schools the night before a big storm was predicted to hit. Other districts, including Cambridge, chose to wait until morning. The storm never came, and parents found their children home on a snowless day.

In the case of Cambridge Public Schools, James Maloney, chief operating officer, assesses conditions during poor weather and determines if roads and school properties are safe. Schools are closed down if Superintendent Jeffrey Young decides to do so.

Students in Massachusetts must attend 180 days of school a year, and snow isn’t the only thing weighing on that schedule. “We had a varying number of hurricane days that just happened that nobody was really counting on,” Porterfield said, referring Sandy’s arrival in October. “We all know, despite what some people say, there are [climate] changes.” In the future, she suggested, perhaps “hurricane days will just use up what we generally call snow days.”

“At the end of the day it boils down to a judgment call,” Lippard said. “It’s about critical mass. We can’t run school without a critical mass of people here. If it’s prohibitive for folks to get here … obviously we can’t have school on that day.”