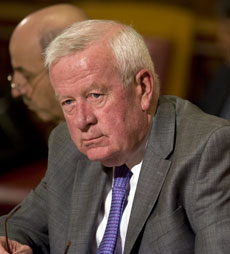 After discussions with district administrators, City Manager Robert W. Healy said Monday that he was able to fill a $2.3 million gap for the district’s fiscal year 2014 budget. (Photo: Rachel Offerdahl)

The $2.3 million gap facing the school district in fiscal year 2014 has been filled by the city, the School Committee and Superintendent Jeffrey Young announced Tuesday at a budget hearing.

The hero is City Manager Robert W. Healy, the superintendent said. Young was told of the budget help in a Monday memo from Healy that briefly lays out financial steps taken and confirms that “as a result of these revenue and expenditure adjustments, it is our understanding that the school administration will now be able to develop a balanced budget.”

“As a result of conversations we’ve had,” Chief Financial Officer Claire Spinner said, “the $2.3 million gap no longer exists.”

Estimated funding for the year had been $149.5 million, while the district was on track to spend $151.8 million. The efforts of Healy and his staff raise the amount going to the district to $151 million, according to the Monday memo. Thanks to tweaks on the spending side, that means the figures match exactly, Spinner said.

In the memo, Healy explained the steps he took to do it:

This financing amount is a result of adjusting the charter school tuition reimbursement from the state’s revised student count and allocation of $1,500,000 to $700,000 and a revision to the estimated health insurance percentage increase from 9 percent to 5 percent based on updated information.

To eliminate the remainder of the school’s shortfall, I have increased property tax support by 5.54 percent over last fiscal year, before the charter school tuition offset.

“This is first time I can remember that the money we’re getting from the city is equal to maintenance level,” meaning keeping things running as they are, said Marc McGovern, a co-chairman of the budget subcommittee. “That is no small thing the city did.”

One reason the hike was considered necessary and justified by some: The district is in its first year of implementing the Innovation Agenda, which changed a JK-8 structure dating back decades by creating four campuses just for middle-schoolers and adding staffing and physical plant demands. The creation of a more standard, districtwide curriculum brought goals of world language instruction and having “co-teachers” for math that Spinner presented Tuesday with tentative prices attached: eight full-time equivalent math co-teachers pegged at costing $649,760 with benefits, but without such things as training time added; and either 10 full-time equivalent employees in world language instruction for JK-5 grades twice a week costing – with the same caveats – about $800,000 or  starting with a single grade next year, with only three FTEs at a cost of about $240,000, and building the program annually.

In addition, there are possible compliance-related program costs of up to $1 million in special education and up to $300,00 in existing bilingual and English-language learning. But Young urged the committee members not to “get locked into any numbers. Don’t take them as gospel. They’re just for discussion purposes – all of these are going to change.”

Since the Dec. 14 school shooting in Newtown, Conn., principals have been surveyed about security concerns and responded with requests for $5 million in improvements, including security cameras; the ability for educators to lock classrooms from inside to keep out a possible intruder; and making access to schools limited to those with the right magnetic or digital cards, district Chief Operating Officer James Maloney said.

Even as committee members, administrators and staff talked about these and other goals, such as athletics spending (with Fred Fantini mentioning up to 10 added coaches to beef up a program “we’ve been very tough on” in recent years), art teachers and computer needs arising as the district nears the end of a five-year technology plan, Alice Turkel noted the need to treat the maintenance-level budget as critically as they treated the red-ink budgets of recent years.

Then, when Healy didn’t come through with money to fill a gap, “we would have gone in and found things to reorganize and do new initiatives. I guess I’d like to see us to do that anyway, letting go of what’s inefficient,” Turkel said, “so we find a few million dollars to add to the priorities.”

McGovern agreed this was “an opportunity to take a look and reprioritize … before we start adding new things,” and Patty Nolan suggested it was time to bring in an outside evaluator to make sure the district was spotting all those inefficiencies.

The educators agreed it was getting harder to squeeze money out of the annual budgets. Maloney noted that in the nine years he’d been chief operating officer, the district had closed three schools and cut secretarial and custodial positions to the essentials.

There was one idea brought forward to make money: energy creation, such as from solar panels installed on the roofs of school buildings, that was raised as a possibility by Mayor Henrietta Davis. It’s not an idea championed by Healy, she said, but could provide plenty of work for Kristen von Hoffmann, sustainability manager for the district, and Richard C. Rossi, who becomes city manager July 1.

This story was updated Jan. 30, 2013, to correct the number of co-teachers and that there are two potential approaches to expanding world language teaching; the previous version of the story combined the two approaches, making it seem as though higher spending was proposed.