Better than your iPod: 150 performers to do Becks’ ‘Song Reader’ live in Davis 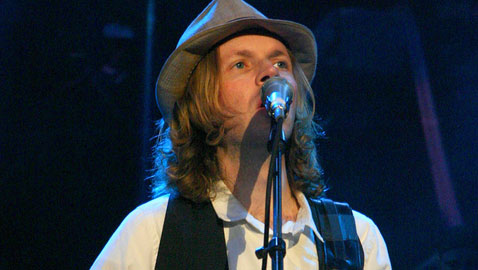 Better than your iPod: 150 performers to do Becks’ ‘Song Reader’ live in Davis

Beck’s latest album isn’t an album at all – it’s a collection of sheet music to be performed – so it’s lucky we have Brendan Burns and Karin Webb to organize musicians and dancers to let us hear what’s in Beck’s head.

They’re not the only people who’ve taken up Beck’s challenge since “Song Reader” came out in early December, and many takes on the songs have made their way online. But with 20 tracks to “Song Reader,” Burns and Webb went big: They’ve assembled more than 30 dance companies and bands, including a full choir, for an event with more than 150 performers Feb. 28 at the Somerville Theatre in Davis Square.

Burns and Webb – improvisational partners since 2009 – announced the effort during Burns’  collaborative “Timestamp” show Nov. 12 at the same theater. That means they planned the undertaking before Beck even released the album. (The album is actually a $34 “book” by publisher McSweeney’s, complete with full-color art for each sheet-music song and a hardcover carrying case, and as of early February it’s on back order for much of the month.)

In fact, Burns said, they’ve been planning since August, when Forbes’ Will Burns called the album “a genius innovation that appeals to the user-generated generation.”

“That got us really excited, and we’ve been brainstorming ever since about who to get involved and how to make it as awesome as possible,” Burns said.

Burns will be playing guitar and Webb dancing alongside staples of the scene such as Brian King, Mary Bichner, Singer Mali, Jade Sylvan and Kristin Ford and Contrapose Dance and burlesque queen Sugardish. The night will also bring some more surprising performers to the stage, including the Boston Tap Co. and Krissy Skare’s 50 Person Choir.

Burns parceled out musical assignments in November so musicians could recorded demos for the dance companies over the holidays. In early January, Webb paired dancers to the demos. In the remaining weeks before the show, the dance companies and musicians will rehearse together and apart in preparation for the one-night-only performance, the organizers said.

Burns said he’s been fascinated to see how the performers make the songs their own.

“As sheet music these songs are pretty straight ahead, but when these musicians sit down and put their work into it, they sound like the artists that they are,” Burns said. “Sarah Rabdau makes her songs sound like Sarah Rabdau and Endation did the same thing for their tune. It’s really incredible. SchoolTree is one example – the song that we had was a Beatlesesque, tune and they really made it sound like a SchoolTree tune.”

“It’s a neat confluence of Beck and the artists involved,” Burns said.

Here’s Mary Bichner performing the album’s “Old Shanghai” as part of a video ad for the event:

“Beck’s Song Reader” takes place at 8 p.m. Feb. 28 at the Somerville Theatre, 55 Davis Square, Somerville. Tickets are $25 at the box office or online.