Cambridge due for ‘potential historic winter storm and blizzard’ Friday, up to 24 inches of snow (update) 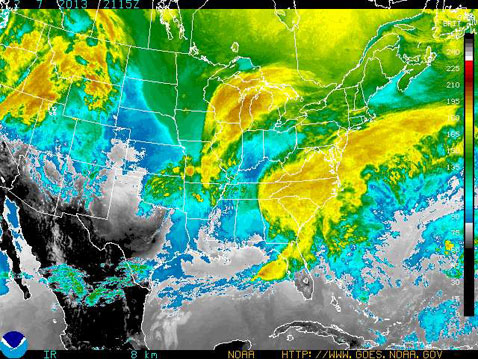 Cambridge due for ‘potential historic winter storm and blizzard’ Friday, up to 24 inches of snow (update)

A National Weather Service image from Thursday shows a blizzard heading toward Massachusetts.

A snow emergency parking ban goes into effect at 10 a.m. Friday with as what the National Weather Service is calling “a potential historic winter storm and blizzard” is expected to drop around 2 feet of snow Friday into Saturday.

In addition, city officials said public schools will be closed all Friday and all city buildings, including senior centers, will close at 11 a.m. Friday and stay closed Saturday.

The blizzard warning is in effect from 6 a.m. Friday to 1 p.m. Saturday, with heavy snow, blowing and drifting at times expected, as well as quarter-mile visibilities, temperatures in the 20s and winds gusting in excess of 30 mph. Accumulation in forecasts made Thursday was expected to range from 18 inches to 2 feet, but that was upgraded to a potential 24 inches Friday.

Midday Friday, Gov. Deval Patrick declared a state of emergency and ordered all non-official vehicles off roads statewide starting at 4 p.m. The T was to shut down at 3 p.m. Many businesses closed mid-afternoon as the accumulation of snow began.

“Light snow will develop by Friday morning, becoming heavy late in the day into the evening commute,” the service said. “The heaviest snowfall will especially focus along the Interstate 95 corridor Friday night into Saturday.”

Avoid overexertion when shoveling snow. Overexertion can bring on a heart attack, a major cause of death in the winter. If you must shovel snow, stretch before going outside.

Watch for signs of frostbite. These include loss of feeling and white or pale appearance in extremities such as fingers, toes, ear lobes, and the tip of the nose. If symptoms are detected, get medical help immediately.

Conserve fuel, if necessary, by keeping your home cooler than normal. Temporarily close off heat to some rooms.

In Cambridge, parking is prohibited on streets with signs declaring “No Parking during Snow Emergency,” and the city warns that vehicles will be towed. A list and map of these streets is available on the Traffic Department website under “Snow Storm Procedures.” Residents are responsible for moving their cars; since finding parking can be difficult, there are five parking facilities that provide free parking (for cars with a resident permit) after 6 p.m. and before 7 a.m. when a declared snow emergency is in effect:

First Street Garage. Enter on Spring Street. The parking is in effect until two hours after the emergency is lifted.

Green Street Garage, Central Square. The parking is in effect until two hours after the emergency is lifted.

52 Oxford Garage. This is Harvard-owned and operated garage is on a space-available basis for no fee from the time when the declared snow emergency is in effect until one hour after the snow emergency is lifted.

65 Waverly St. This is a Massachusetts Institute of Technology-owned surface lot at Sidney, Waverly and Erie streets by Fort Washington Park. Parking is free until two hours after the emergency has been lifted.

This post may be updated with additional municipal storm information. An “update” notice will be added to the headline if so.