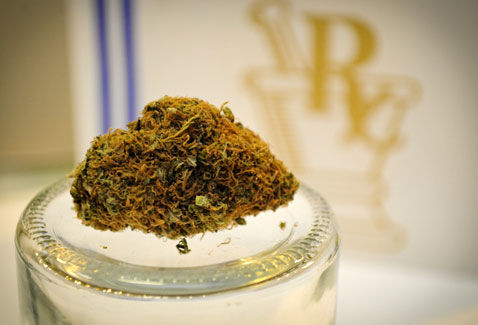 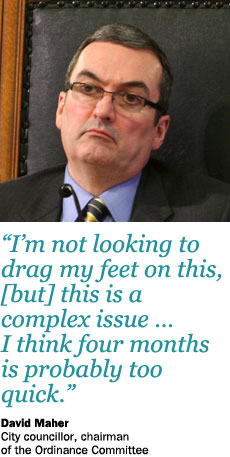 A nine-month ban on letting medical-marijuana dispensaries into Cambridge was changed on Wednesday into a six-month ban starting from when the state puts out its own rules on the matter, even as speaker after speaker suggested Cantabrigians did not know what they were voting for in approving the dispensaries or voted for them only “in the abstract.”

Just as the nine-month timeframe starting Jan. 1 was complicated by questions of whether it was a minimum, maximum or meaningless, the change to six months also came with a variable: when the state rules emerge.

Voters in November made dispensaries legal as of Jan. 1, giving the state Department of Public Health 120 days – until May 1 – to issue regulations. Cambridge’s City Council, meanwhile, took the advice of City Manager Robert W. Healy in accepting a local ban until Oct. 1.

Now state officials are saying only that its regulations would come “as close to May as possible,” and four councillors at an Ordinance Committee meeting have tied the city’s moratorium to that soft deadline. Whenever the department introduces statewide rules, Cambridge officials have six months in which to assess them and adapt its own zoning and licensing for the siting of treatment centers.

Councillor Minka vanBeuzekom, noting that Massachusetts and Cambridge had models to follow in the 17 other states that have legalized marijuana, suggested that as little as four months might be needed. “We’re not blazing new ground. Massachusetts of course will have its own subtleties, but it’s not like we’re navigating uncharted territories,” she said.

The other councillors felt six months was more appropriate, and left open the possibility that the full nine-member council would issue more specific guidelines before the time was up.

“I’m not looking to drag my feet on this,” said David Maher, who leads the committee. But “this is a complex issue … I think four months is probably too quick.”

Maybe Cantabrigians didn’t get it

The law says each county in Massachusetts will have at least one treatment center but no more than five. Middlesex County has 54 cities and towns, and some – including Wakefield, which had the lowest margin of approval at 54 percent – have moved to bar dispensaries entirely. But Cambridge was reported as having the most votes in favor of medical marijuana of any Middlesex city or town, beating the statewide 63 percent approval by 10 percentage points and rising to 79 percent approval if the count is limited to voters who marked a choice about the marijuana ballot question instead of leaving it blank.

Still, a theme among officials and residents during public comment was that voters did not understand what they were voting on, although everyone seemed to agree the city voted “overwhelmingly” in favor.

Councillor Craig Kelley, who left the meeting before the vote setting the six-month moratorium, said he thought “more than anything else, this referendum was a commentary on the war on drugs, which I think has been an abject failure. But having it be an abject failure in the abstract is very different from telling people that they’re going to have a distribution center or manufacturing center in their neighborhood.” Maher said he agreed “people did vote for the broader issue.”

Cory Mashburn, part of a group called the Massachusetts Prevention Alliance, said he had stopped some 500 people after voting Nov. 6 and found cause to wonder “Did they know what they were voting for?” since he claimed to have changed people’s minds to the point where they said “I probably should have voted no.” Gary Mello, a pharmacist who backed the nine-month moratorium, urged councillors to give Cantabrigians their own vote in November: “I believe Cambridge voters should have a referendum of their own to decide whether or not we want to have [a dispensary] in the city. Let’s get it in front of people who’ll have to put up with it if necessary.”

A November poll by Angus Reid showed 54 percent of Americans favor legalizing marijuana, rising to 61 percent in the Northeast, and that 66 percent of respondents believe it will be legal nationwide within the next 10 years. A Public Policy Polling survey the next month showed 58 percent saying marijuana should be legal and 50 percent saying it will be in the next 10 years. A November USA Today/Gallup poll put the legalization contingent at 48 percent, on a fairly steady upward slope since polling began in 1969, but said 64 percent believe the federal government should stop enforcing its drug laws in states that have approved use of the drug; a Reason-Rupe poll in January shows Americans want the federal government to stop going into legalized-marijuana states to arrest sellers (64 percent), growers (68 percent) or users (72 percent). Federal bills legalizing pot are blossoming, with two introduced this week and perhaps another eight on the way.

Cambridge gave the marijuana ballot question the second-highest number of yes votes of all Massachusetts’ cities, behind the much larger Boston, Cheung said, and while Boston’s yes-to-no ratio was 2.3-to-1, the ratio in Cambridge was 3.8-to-1.

“The people have spoken loud and clear, and I think they understood what it was they were voting for,” Cheung said.

Like Planning Board members last month, Mayor Henrietta Davis had a number of basic questions about the ballot question people voted back in November. Her introductory remarks, at least initially, provided some of the meeting’s lighter moments:

I am just amazed at this issue. It seems to bring in the ’60s and the excitement of free love and beads and all that crazy stuff from back then, and libertarianism and every kind of thing, and that seems to impel people to think that somehow this has got to be a good thing, because it’s finally freeing marijuana. But what I’ve been hearing is that people in other communities are looking at this like tattoo parlors. Like, ‘Is this a good thing to have in your community? Does it really bring economic development? Is it a positive influence on your community?’ And what are the unintended consequences to parts of the community that maybe don’t want to brand themselves as unusual uses like this?

Late in the meeting vanBeuzekom – echoed by Maher – reminded listeners that as a hospice volunteer she had seen firsthand the beneficial effects of marijuana on patients suffering from such medical problems as Parkinson’s disease and multiple sclerosis. “There are very clear benefits to people suffering from these medical conditions,” she said. “I understand the ballot question itself was vague and I certainly understand the anxieties of the police, and there are lots of questions that need to be sorted out … but I really want to make sure we don’t forget that there is a real benefit for people suffering from these diseases to be able to use the drug freely.”