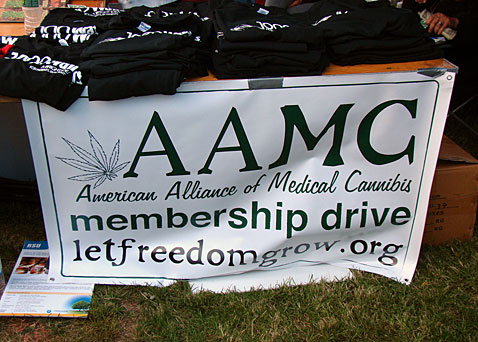 Pro-pot groups such as the AAMC seemed to win a fight for medical marijuana last year, but the debate has moved down to the community level. (Photo: Massachusetts Cop Block)

You wouldn’t know Cambridge voted overwhelmingly in favor of medical marijuana dispensaries from the vote taken Tuesday by the Planning Board. The board as a whole backed a moratorium on establishing dispensaries in Cambridge, although members admitted they didn’t know if the “nine months” invoked in the moratorium’s language was the minimum or maximum amount of time the dispensaries would be blocked in the city.

On Nov. 6, a statewide ballot question to legalize medical marijuana passed with 63 percent voting in favor. In Cambridge, 79 percent of those voting on the question were in favor. The law went into effect Jan. 1, with the state Department of Public Health required to have regulations for dispensaries in place May 1.

But on Dec. 17 the City Council approved a nine-month ban suggested by City Manager Robert W. Healy. Now the board has backed that ban, albeit with questions.

“We don’t ask that of McDonald’s”

In addition to asking the council to clarify the “nine month” language, members of the board were curious Tuesday at why a medical-marijuana dispensary had to be a business’ primary use, not an accessory use – Jeff Roberts, a city project planner, explained the concern that zoning laws for one use might supersede the other – what the definition of “nonprofit” was, considering that the law says nonprofit businesses are to run the dispensaries, and even such details as where the marijuana would come from.

Chairman Hugh Russell tried to rein in the discussion.

“There are lots of questions here, but we as a Planning Board shouldn’t be addressing most of them,” Russell said. “The decision as to where this activity can take place in the city, that’s within the land-use regulations. Trying to understand the nature of the activity is the part that’s going to require imagination, unless you think it’s going to be like the horror stories experienced in some places or the non-horror stories experienced in other places.”

As to the question of where the dispensaries would get their marijuana, Russell noted, “We don’t ask that [kind of question] of McDonald’s – and I don’t think we really want to know – and we don’t ask that of Libby’s Liquors.”

The question of whether the board had much right to weigh in on those details was seconded during public comment by resident James Williamson. The other speakers were city councillor Craig Kelley and Cory Mashburn, who presented himself as part of a group called the Massachusetts Prevention Alliance but who has also directed the Office of Prevention for the City of Somerville. Both said there were too many questions in the text of the law to rush the work sorting them out being done by various city departments.

“I know the will of the people. I voted for this myself,” Kelley said. “I think this is far more complicated than any of us realize.”

Massachusetts is the 18th state to vote to legalize marijuana. California was the first, with a law passed in 1996.

With state regulations in place by May 1, the city’s moratorium apparently grants it another five months to figure out where and how dispensaries fit in with current zoning and other laws.

Ultimately it was suggested by the Planning Board that the council had some clarification to do in its moratorium. Its language – as written by Healy, who on Dec. 17 referred three times in the space of a minute to “if” the dispensaries would be allowed in the city at all – is vague enough, according to board member H. Theodore Cohen, that “the expiration is now totally open-ended. This says ‘for a period of nine months or until such future time as the Cambridge City Council enacts superseding zoning regulations. So if the City Council were to choose to not adopt anything else, this would be in effect indefinitely.”

With the board’s vote, the issue moves on to the Ordinance and Public Safety committees, which are led by David Maher and Kelley, respectively.

“This is something we have to move towards as a society and as a city, and what we don’t know is a lot bigger than what we do know. We’ll know a lot more after the Department of Public Health issues regulations,” Russell said of medical marijuana. “Whether that’s enough or not, we’ll find out.”

The board also gave a formal recommendation Tuesday to developer Forest City’s requested zoning change to expand its University Park. Members said they were continuing public comment from their previous meeting, which meant only people who hadn’t spoken previously could take the lectern – and that was a single person, president of the Central Square Business Association George Metzger. He reminded that the approval being voted was for zoning, rather than the much-discussed building that would go into that zoning.

There was brief debate and confusion over the wording of Forest City’s commitment letter as Cohen tried to parse a promise to build units of affordable housing, which brought a rebuke by Russell that “things need to be clearly stated.” (In addition, at least two members of the board puzzled over the developer’s use of the term “demised.”) A vote to recommend the zoning proposal to the City Council passed without dissent.